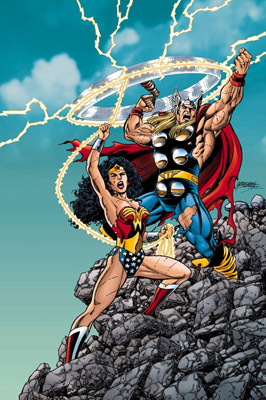 Thor, Hercules, Wonder Woman, the Fourth World, Ares, Venus, the Warriors Three, Valkyrie, Snowbird, Armstrong, Bacchus, the movie He-Man, Kid Loki, Jaguar, Gilgamesh, Promethea, Zauriel, Sigurd Dragonsbane, and some might argue, Superman... They come from the world of myth, sometimes a new though strangely familiar myth, to help mankind. The Christ figure so prevalent in American literature? Or something else? Today we look at this enduring archetype to see what makes it so alluring.

Well, for one thing, it's easier to borrow than to create. Gods and heroes from Greek and Norse myth - the most popular in comics - are in the public domain and come with a whole history, villains and supporting players, worlds, that a comics writer can mine for their best elements. Immortal heroes who have always been protectors of humanity, or are just now entering the modern era, their ancient ways clashing with our impious attitudes towards them. It's ready-made for superhero conflict. And many of these heroes have a head start with the audience, an audience fairly likely to have been raised on myths and legends. The more well-known the original myth, the more long-lived the superhero seems to be. Thor, Hercules and Wonder Woman (the Amazon myth) way on top, while Gilgamesh (Sumerian) and Snowbird (Inuit) are relatively minor players.

Jack Kirby isn't the only one to dare creating his own pantheon of gods, but most others were taking their cue from him (Godland, for example). In his Fourth World comics, he put the myths of the past into comic book vessels. And so we have a Greek/Norse-type pantheon of superheroes and supervillains, a Christ-figure who would have escaped from the Cross, and New Age avatars, one of which dresses like a cowboy. These are comic book gods far more than they are science fiction gods (though there is an element of that, of course, but comic book SF). That's why Kirby can have characters like Virmin Vunderbar or Serifan in his mythology without missing a beat. These new myths are nonetheless as potent as the old ones, and perhaps more free for not being tied to a single tradition. The best-known SF/comics god is, of course, the first: Superman. Though not necessarily designed as such originally, he soon enough took on those tropes. A Messianic son sent to Earth from a highly-advanced planet that could easily have been Asgard or Olympus. A man from elsewhere, gifted with great power and benevolence, helping those in need, yet retaining (in Clark Kent) a certain humility and humanity. I've always thought Superman's Marvel analog was Thor and not just because of the red cape. Hard to imagine Stan Lee or Jack Kirby not having the Last Son of Krypton on their minds when they (re)created the character.

Familiarity is the "God Among Men"'s greatest asset. We know these characters already, where they're from, who they're likely to have fought, and we can't wait to see what our comics creators make of Loki or Hades or the Fire Giants. Even when these characters are original myths, their inherent "divinity" invoke the reader's own brand of spirituality. They are saviors, protectors of home and hearth, or perhaps, avatars of some force we recognize, be it death (on skis!), strength, or sadism. As in any myth, we see facets of ourselves in them, what we may become, what we should avoid. And superhero comics are, in many ways, those same morality plays and life lessons. In a sense, I suppose all superhero comics are about "Gods Among Men", though some were men before they ever became so.
Archetypes Comics Jack Kirby Superman Theory Thor Wonder Woman

Anonymous said…
Thor also seems to borrow aspects of Captain Marvel Jr.
which is derivative of Superboy.
April 8, 2013 at 11:27 AM

Michael May said…
Captain Marvel Jr.'s first appearance was in 1941. Superboy's was in '45.

Siskoid said…
On the whole Shazam connection, I've got a whole other archetype article in the pipeline for those kids, but where it all connects is that Captain Marvel's powers each derive from Gods and heroes from myth (in addition to being somewhat derivative of Superman). Jr. and Mary then derive from the Big Red Cheese.
April 8, 2013 at 2:06 PM