April 18, 2013
75 years ago today, newsstands across the land put Action Comics #1 on display. On its cover, a strongman in colored tights lifted a car over his head and smashed it nose into a rock as men in suits freaked out all around him. It sold like hotcakes and the world of comics was never the same again. As you know, I ran a series of daily Superman articles for an entire year before relegating the continuing feature to Saturdays. So instead of making the Anniversary about HIM on this Thursday morning, I'll tell you to come back Saturday for more "Reign of the Supermen", and make it about ME instead.

I was born in 1971, a year that was actually pretty important for the Man of Steel. It was when Superman shed his Silver Age trappings - the Kryptonian douchebaggery, reliance on twists, hoaxes and flashbacks, multi-colored kryptonite and physical transformations - and became a modern character. To announce these changes, DC ran a 2-page house ad: 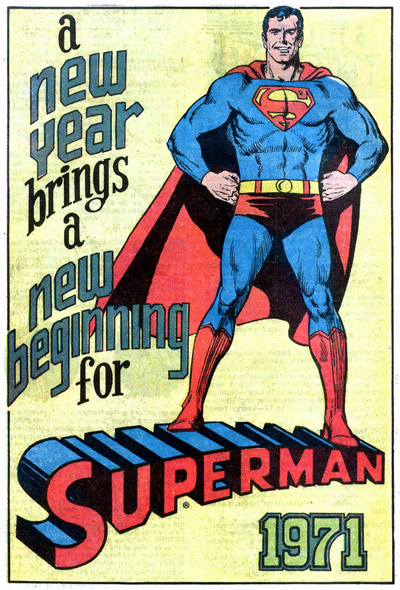 And on page 2, they should you how Superman evolved from Golden, to Silver, to Bronze Age. Could it even be this house ad that inspired the Olympic medal naming standard for each era? First, they would swing the pendulum back on his powers. 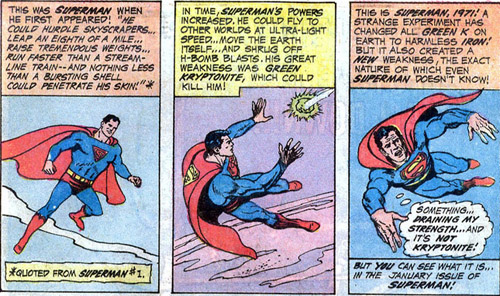 Those powers would come back, and the 1985 reboot would pull them back again. Post-Crisis Superman's powers eventually ended up at a pretty reasonable level, not to strong and not too weak. The New52 Superman's powers seem to be on the high end though.

They would also change his boss, from George Taylor to Perry White to Morgan Edge.

In the New52, Superman's been in each man's service in under 5 years and is now striking out on his own in a 21st-century medium - the blog.

And there would be changes across the entire Superman Family line of books: 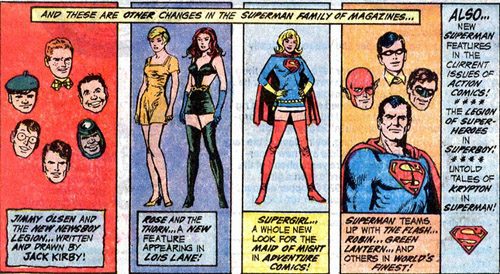 Jimmy Olsen taken over by Jack Kirby! (Exciting!) Lois Lane, also 75 today, gets a new back-up! (At least she had a book.) Supergirl gets a new costume! (Yeah, the girls get no respect.) And World's Finest gets more plain old Batman! (That's fine.) PLUS the Legion in Superboy! Untold Tales of Krypton! Other features (not named because it tended to be stuff like Super-Baby and Tale of the Fortress of Solitude)!

It wasn't an Anniversary year (except for me), just the start of a new decade, but they really made an effort. Have we seen the same for the 75th Anniversary? Or will it just be the Man of Steel movie and Clark Kent, Super-blogger? Behind-the-scenes trouble at the Superman offices isn't making me particularly hopeful...

Matthew Turnage said…
On a personal note, this month is my personal 20th anniversary of Superman collecting. I had read Superman comics on and off (but mostly off) since the early 1980's, but the release of Adventures of Superman #500 and the subsequent Reign of the Superman came on the cusp of my first part time job. I could actually afford to pick up comics regularly and I loved that storyline. I haven't missed a new issue of any Superbook off the stands since.

My interest in collecting the new issues also sparked an interest in building a back issue collection. Initially I only put together a post-Crisis run, but as I completed it I decided to delve into pre-Crisis. I've taken breaks for the back issue collecting from time to time, but about a year ago I succeeded in filling in a complete run going back to the January 1971 cover date - the period promoted in the ad from this post. That was a great time for all the titles, especially Superman, Jimmy Olsen and Lois Lane. Superman rarely looked better than when drawn by the Swanderson team.
April 18, 2013 at 12:04 PM

Like you, I picked up a book here and there, mostly on the strength of the cover, but it's with the Byrne reboot that I started collecting Superman, only stopping in the late 90s (just before Electric Superman I think) because of money concerns, though there were storylines I did pick up since, and until Lobdell hit, I'd been reading Superman's books for a few years again.