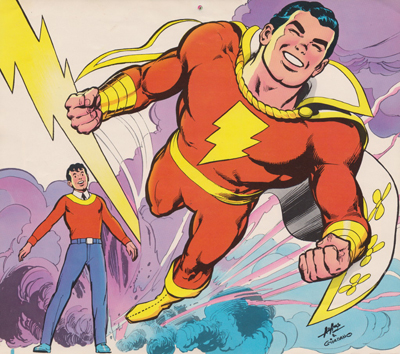 Captain Marvel, the other Captain Marvel, Ninjak, Dial H for Hero, Prime, Amethyst, Darna, Miracleman, the animated Thing, Sailor Moon, Infinity Man, Firestorm... Children and teens who with a single word, gesture, or dial-up turn into a superhero. There are variations - Rick Jones and Mar-Vell merely trades PLACES, and the Forever People become a gestalt being - but the concept is largely the same. The least powerful among us have the chance to become the most. They have no powers in real life and have the most airtight secret identities in the world, heroes who in a flash of lightning simply cease to be.

The attraction is obvious. Instead of having to image ourselves as having powers which might destabilize our lives (à la Spider-Man), we simply become the hero we doodled on the back of a notebook. Anyone can do it, and you're allowed to ignore that decidedly un-super physique in the mirror. It's not just kids, it's adults too, but I stuck to minors in the list above because they best exemplify this idea. Because in addition to gaining powers above those of mortal ken, the very idea that it turns them into adults - or really, the IDEA of adults, since they'll have none of responsibilities beyond crime-fighting - increases their power in the world considerably. Captain Marvel can walk talk and get respect and admiration, he's strong, powerful and charismatic, but he'll never pay taxes, or get a job, or worry about his health.

And perhaps that's why modern writers have difficulty with the archetype. The Marvel Family has slid into corruption in all but the all-ages books they've appeared in, Dial H is about adults, and Ninjak has been divorced from that concept. Because if you apply your adult cynicism to the idea, there's no getting around the ickiness of a child in an adult's body. Basically: How do we address that being's sexuality? Answer: WE DON'T. It's a magical idea. Pure power fantasy. Trying to make it "realistic" or as a way for the child/teen to misbehave using that power is counter to the core of the archetype. It is the domain of alternate universe stories like Kingdom Come, and should not be applied to continuing characters lest they become distasteful or irritating.

What do you think? Are older readers unable to even enjoy this trope without looking at it cynically? Or since THIS older reader can manage just fine, is there an age window with which the archetype doesn't resonate?
Archetypes Captain Marvel Comics Theory

Anonymous said…
Captain Marvel and family are pretty generic heroes if you strip them down to their stats, basically Flying Bricks. If you're not going to do anything interesting with them, they're going to be dull. You could hypothetically make that argument about any character, true, but some characters' abilities are distinctive enough to make them more fundamentally interesting. I suppose you could write a Daredevil story where his unusual senses never come up once, but that'd be gross underutilization of the character.

Back in the day, Captain Marvel was big because of the tone of the stories -- action-packed yet lighthearted -- and it worked. Trying to fit him into a more "realistic" mold just takes away the original charm. Even then, on some occasions it's been done well, for example his appearances on the "Young Justice" cartoon. But those are the exceptions.

So I'm not sure that his switcharooniness is a problem, beyond wrtiers' temptation to do all the wrong things with it, say, have him start dating Stargirl. Oh yeah, that totally made things better.
April 22, 2013 at 6:37 AM

Siskoid said…
Ask yourself why his adventures worked when they were light-hearted. I think it's because they were a child's fantasies. So the alter ego is very much a part of it.

Martin Léger said…
I don't know much about his comic book appearances, but in Young Justice he's such a fun character. He's in the Justice League, yet he's so pumped to hang with the teens in Young Justice. Heck, he isn't even a teenager yet! But nobody knows that at first.

I think this archetype appeals more to young kids and adults. The middle teenager phase doesn't seem to blend with this hero-type. A weird phase were you don't consider yourself a kid anymore, but people still treat you like one. You're also frustrated that you aren't considered as an adult either.
April 22, 2013 at 8:22 AM

Martin Gray said…
Great piece, and Martin makes a good point; Billy and co should be young enough that sexuality shouldn't come into it - they should be thrilled with the powers, and once a mission is over, return to their regular age - sexual relationships can come into play as their regular IDs age normally.
April 22, 2013 at 12:56 PM

Anonymous said…
"Ask yourself why his adventures worked when they were light-hearted. I think it's because they were a child's fantasies. So the alter ego is very much a part of it."

They worked because they were fun and told well. Captain Marvel didn't live in a world that hated and feared him, but he never knew when he'd get hit by a ray that replaces his knowledge of English with Venusian. SHAZOOGLE!

I'm trying to find it (in vain), but at some point many decades ago, Captain Marvel fought a villain who had every power you couldn't think of, something to that effect. So the battle largely consisted of Captain Marvel and the bad guy making lists of powers. A brilliant concept, brilliant enough that Grant Morrison later used it in "Doom Patrol" (knowingly or unknowingly, I assume the latter). Similar stories but with different tones -- lighthearted or trippy, in this case.
April 22, 2013 at 4:13 PM

The choice doesn't have to be between only stupid, kids comics and dark, "mature" ones. A story can celebrate childhood without being juvenile itself.
April 22, 2013 at 4:15 PM

Siskoid said…
Maybe the Marties are right. Maybe DC is marketing its superhero comics to teens and teens are the group you didn't just address in your comment.

It's been a while and I'm from a completely different generation obviously, but I'm pretty sure that, as a teen, I rejected things I later couldn't believe my younger self rejected. Then again, I collected Peter Porker the Spectacular Spider-Ham, so I don't know anymore.
April 22, 2013 at 4:27 PM

Martin Léger said…
The funny thing is that it seems that each time comics try to for the teenager demographic, they hit all the rights notes, but it’s still a shitty song. Ironically, having mature content like sex, violence, just overall grittiness has the opposite effect wanted and only succeeds in making it more juvenile. Basically, all those dumb gritty comics from the 90’s.

The only teen-centric comic I remember liking as a teen was The Runaways, which came out when I was like 14 or something. Granted I really digged Spawn at that time too. I definitely liked transformation as a younger kid; Hulk was pretty awesome in my eyes

Buryak said…
Captain Marvel is, to me at least, the ultimate superhero. He's everything Superman couldn't be, because he was written so seriously. Supes did take himself seriously (Golden Age and Modern Age specifically... Silver Age wasn't, it was pure fun and acid trips). And as his readership grew older and more 'mature' (shifting generations too), so too did his storylines. The storylines may have matured, but all sense of wonderment and fun disappeared. Captain Marvel was total wish fulfillment for any kid who loved and wanted to be a superhero... me included. Adventure for the sake of it. Smiling all the time and joking with the criminals he's beating the crap out of. The crazy villains and supporting cast just made it even better. Talking Tawny? IBAC? Mr. Mind? Sivana? C'mon? They're awesome!

There's a charm to it that is sorely lacking in today's comic industry. All this 'adult', 'dark', 'realistic', 'jaded' stuff. Where's the fun? Don't get me wrong, I like a lot of modern comics, but nothing beats stuff like Captain Marvel and Mr. Monster for me... stuff that never took itself too seriously. For crying out loud, he was SOCK-ing dudes out of their shoes!

I honestly could write a novel why Captain Marvel is awesome and why they shouldn't mess with the formula, but I gotta go to work. I wish I could say SHAZAM and skip it right now. Wish fulfillment again.
April 23, 2013 at 8:18 PM

Siskoid said…
Great mini-essay, Buryak. I'm with you all the way and seek out those fun books where I can find them. Love all those villains too.

I do admit I haven't read all that many classic Captain Marvel stories though. Is there a run I should definitely read? Point me in the right direction!
April 23, 2013 at 8:42 PM

Buryak said…
Go to the Digital Comic Museum, its got all the Fawcett goodness you could ever want. It even has all the Plastic Man/Silver Streak/Daredevil (lots of Cole!) golden age stuff. All the public domain golden age supers and Canadian super comics too (I know you're Canadian... so am I... frickin' Winnipeg). You gotta sign up, but its well worth it.
April 24, 2013 at 8:24 AM

Siskoid said…
In other words, the pre-DC stuff is the best.

I do have the first Shazam Archives book, but it's clearly from before it got into its own tone. I never got past the first couple stories. Should look ahead.
April 24, 2013 at 8:46 AM