April 02, 2013
The (a?) featured threat in the Doctor Who 50th Anniversary Special was leaked today, and it's the long-overdue return of the Zygons! Check out the "redesign". 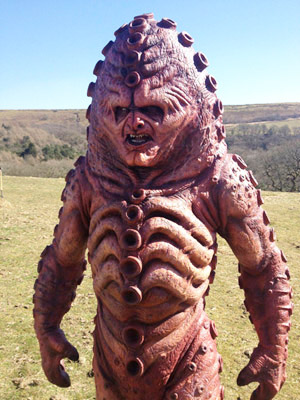 I'm quite chuffed about this. The Zygons have such a great and unusual look, the production decided to stick to the original design as much as possible. Only the face can really be said to have changed. The eyes are less beady, and the cheeks less like those of cat or dog. Nice sharp teeth, though it's a bit too much like a Buffy/Angel demon for my tastes. But as long as they're all suction cups, I'm not sure I care all that much. Can't wait to see their bio-tech updated for 2013.

The Zygons have appeared only once in canon - Terror of the Zygons in 1975, where they fought the Doctor, Sarah Jane, Harry and UNIT - but they've been surprisingly durable in fans' imaginations. David Tennant has said they were his favorite monster, and they've starred in fan-produced videos and audios courtesy of BBV, as well as official audios from Big Finish and novels not just in classic ranges, but in the recent 10th Doctor range as well. They're one of the relatively few classic monsters to currently have their own action figure (of course I have one).

You might think this is still an odd choice for the Anniversary Special, since they have no connection to the very beginnings of Who. The only historical factoid about their one story is that it's the last proper UNIT story to feature the Brigadier, and Harry Sullivan's last appearance, hardly Anniversary material. But I'm kind of expecting the Special to feature MORE than one alien threat, and the Zygons may be only who the 10th Doctor is fighting in his solo bit of the episode. Seeing as they're Tennant's favorites AND they were first encountered at Loch Ness in Scotland, the country Tennant is from, they seem to jokingly tie into HIS particular character.

But with at least one costume made, that would allow future stories to make use of them in full-length episodes...
Doctor Who

Thomas Mills said…
I think the Zygons feature here as a convenient sub-plot, ie. their shape-shifting abilities will allow Moffat to include the earliest incarnations of the Doctor to 'appear' in the special.
April 2, 2013 at 2:59 PM