July 05, 2013
"This is no alien creature, Doctor. It's one of us, a Time Lord, the first and greatest of our people. The one who sacrificed all to give us mastery of time and was shamefully abandoned in return." 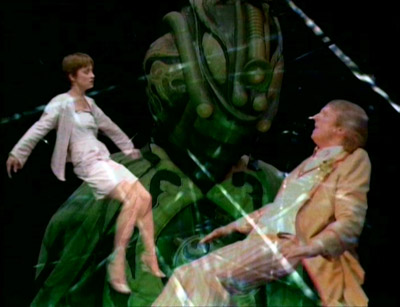 IN THIS ONE... Omega holds the Doctor in the Matrix until he escapes and finds Hedin is the traitor in the Council.

REVIEW: Ron Jones had done a nice enough job with Black Orchid, but this is his second directorial effort in a row (after Time-Flight) where he's saddled with too many effects and too much hogwash. He's not coming off very well as a result. I've just about give up on making sense of this mess. Everybody keeps harping on about Omega getting control of the Matrix (apparently his true purpose, the Doctor was just a means to that end, or was he?), but we're never told why this is significant. We're expected to understand what the Matrix is from The Deadly Assassin, what, 7 years before? Knowing all about the Gallifreyan Matrix doesn't actually help give these scenes any tension. Oooh, he's taken over the Internet, civilization will collapse. Meh. Look at all those Matrix scenes more closely, and they make even less sense. The Doctor's mind is brought there while his body is cloaked? Dematerialized? Whatever. Omega is soon shown to have access to the Matrix, so that's not the issue, and he can bring Tegan into it in the most pathetic CSO sequence in years. (Sorry, I can't take their swivel stool poses seriously, especially when they start vibrating.) Later we find out he wants to "isolate" the Matrix, so I guess deny other Time Lords' access to it, and the Doctor won't help him. Hedin, revealed to be the traitor, working with him all along in a room filled with helium, holds the president at gunpoint but dies before he can make Borusa do anything. And then Omega has complete control of the Matrix, GASP. Well, how? What was Hedin's part and why did Omega get what he wanted even though Hedin didn't complete the mission? IT'S NONSENSE.

It doesn't stop there. What does the Ergon's gun do? Teleport and terrify? Or does the polarization effect mean you're turning into anti-matter so you can exist in Omega's TARDIS? And if so, how can you later walk out into the crypt as Colin does? Borusa apparently didn't change the password on the presidential locks since the Doctor held office (it lends Hedin credibility in his bid to oust the president). There's a ludicrous Agatha Christie scene out of the Castellan Mysteries, a confusing ploy to flush out the traitor, but Thalia is in on it? If you know it's Hedin, just arrest him. If you don't know which Councillor did it, why trust Thalia (except for the fact we, and only we, know the traitor is male)? There are a lot of people crying out with urgency, but I'm not given a reason to CARE.

THEORIES: Sometimes Rassilon is the founder of Time Lord society, sometimes it sounds like it's Omega. So which is it? The novels and audios sometimes hint at the politics behind the disparity, but I think we can agree that one man does not alone forge a society. Omega may well have been the great engineer who gave the Time Lords the Eye of Harmony, a black hole that powers the Citadel and TARDISes. That's not in dispute. Nor is it in dispute that Omega accidentally flew into that black hole and was declared dead. Was he the victim of sabotage? If so, the most obvious suspect is Rassilon, who apparently swooped in and became "founder". He might have become that anyway. Omega was a stellar engineer and all his feats seem to focus on stars and energy. Rassilon might have focused on time travel, or dimensional transcendence, or simply sociopolitical structure, any of the elements now associated with Time Lords. Maybe none of that is possible without Omega's energy source, but it's not an ironclad claim to founderhood. Omega was gone and it was Rassilon who harnessed that energy and built an empire. His tomb is on Gallifrey, not in some black hole. And yet, I can well imagine Time Lords like Hedin, having discovered Omega survived back in The Three Doctors, might have seen a potent leader to reverse their society's decay and lethargy. Too bad Omega's gone a little bit insane.

VERSIONS: The DVD's CGI option gives the various weapons a bit more of a blast, which makes more sense off Hedin's death. When the Doctor uncloaks, there's a sort of beam-in effect. Nothing was done to help the Matrix however, no green letters falling, nothing.

REWATCHABILITY: Low - It's Time-Flight all over again. Or a precursor to the TV Movie. The words are familiar in the Doctor Who context, but they're only used to troll the audience. WHAT IS GOING ON AND WHY SHOULD WE CARE?
Doctor Who

Zundian said…
I forget where I got this, but Omega, Rassilon and a third (unnamed) Gallifreyan were all responsible for the Eye of Harmony. Omega "died," Rassilon became the hero and the unnamed third disappeared.

Siskoid said…
It's from the novels where "the Other" is not only the third founder but also, somehow, the Doctor.