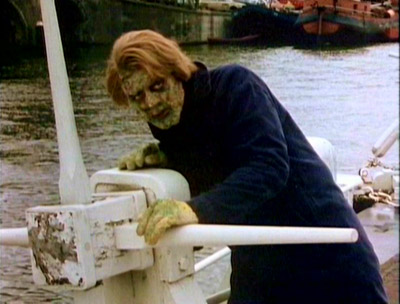 IN THIS ONE... Omega takes the Doctor's form and off they go, chasing him through the streets of Amsterdam.

REVIEW: Arc of Infinity is the kind of serial that I'd like to see tackled in Cinema Sins style. I mean, for Pete's sake! While it looks like I was wrong to nitpick Part 3's setting up of Hedin as instrumental to Omega taking over the Matrix because he was actually instrumental in getting Omega transferred to normal matter, but same problem, Omega STILL manages it (if not for very long). Regardless, there's nothing that would indicate WHAT Hedin would have done to make this transfer more long-lasting. Even if we let that pass (and I'm willing to), they still throw a lot of nagging things our way. The worst of these is the eponymous "Arc of Infinity". You can shout "the Arc is shifting" as if it means something, but you need to establish that stuff in more than a throw-away line back in Part 1 for it to work. We're told it's an "intergalactic region devoid of all stellar activity" and it has apparently acted as a doorway to the anti-matter universe. But in THIS episode, Amsterdam is "located on the curve of the Arc"! Basically, they changed what the Arc means because I'm pretty sure our system ISN'T devoid of stellar activity. Then you have the Doctor talking about the Ergon as if he's seen the thing before, and the all-powerful Time Lords reduced to creating a diversion and staring at a blinking light as they somehow track how much anti-matter is present on Earth, not that anti-matter makes any sense at all (as usual). I mean, if Omega is made of anti-matter, then he can't interact with the positive universe without creating a massive explosion. Fine. So what is his TARDIS made of? The Ergon and his hostages seem fine inside AND outside. And when Omega has become the artsy German version of the Doctor and starts to revert to anti-matter, why isn't there an immediate explosion? How are his cells and anti-cells co-existing. It's all bollocks.

Speaking of bollocks, is there any reason why this story needed to take place in Amsterdam? It seems even more indulgent than the trip to Paris in City of Death. That was at least charming and used the Louvre as a necessary part of the plot. Amsterdam? The foot chase makes sure to use the local sights and elements that guarantee we're not looking at Britain - trams, music organs, bridges and canals - but the story could have taken place anywhere. That's a waste of a good location, and not the last from travel-fan/producer John Nathan-Turner. The one charming use of the location is the now "positive" Omega finding some joy in the steam organ show, sharing a creepy smile with a child. The pathos comes late, but there it is, and it makes us perhaps care enough about Omega's plight to ask whether the Doctor is doing the right thing, destroying a man who only wanted to go home after thousands of years of limbo. Of course, there's that pesky power-mad agenda, but y'know, a compromise might have been nice. Instead, we have one of several instances of the fifth Doctor pointing a gun at a villain and shooting him. And it's also another instance of the production showing the baddie's agonizing death-throes. Coupled with Omega's gross melting into the same brown liquid vegetables in my fridge for too long turn into, there seems to be an unreasonable fixation on body horror. That's why I like to compare the JNT era with Star Trek: Voyager. They have a few things in common.

Did I like ANYTHING? Well, the regulars do their best. Judging from the way she says she missed Tegan, we can easily infer untold adventures between Time-Flight and Arc of Infinity, during which she's evolved into something of an action heroine, quick to defend the Doctor with unerring aim. Listless Tegan is quite happy to rejoin the TARDIS crew and her roommate is too, but the Doctor's face says it all. His fading smile is hilarious, if unkind to the character of Tegan. I'm happy to have her back because even when she has more to do, I'm still no fan of wet, logical Nyssa. Sorry. I'd rather have someone with a little more personality, and i guess Tegan is it.

VERSIONS: The DVD's CGI option adds a lot of glow to the explosion in Omega's TARDIS, Tegan's forcefield, and Omega's ultimate destruction, plus the usual blaster and floating crown effects. The Target novelization doesn't make any memorable (or useful) changes to the story.

REWATCHABILITY: Medium - The plot's still bonkers, but you can enjoy Omega's rekindled humanity, a chase through an exotic city, and Tegan's return.

STORY REWATCHABILITY: Medium-Low - It's kind of perfect. Skip both Time-Flight and Arc of Eternity and you won't even realize Tegan left.
Doctor Who

Mitchell Craig said…
It's the Nyssa moments which make "Arc of Infinity" worth my time. My favorite one in Part 4 (and an all-time favorite Companion Moment, BTW: when the Doctor asks Nyssa if she has money for a phone call, she just looks at him with a look combining affection and incredulity.
July 7, 2013 at 6:19 PM