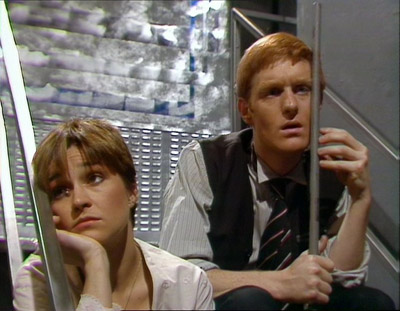 IN THIS ONE... Terminus' engine is set to blow and undo the Big Bang. Nyssa is taken by the Garm.

REVIEW: An awful lot of time is spent in this episode showing characters learning information other characters (and thus the audience) already knew. Part 3 Padding Syndrome strikes again. Does it matter if Nyssa knows what's awaiting her if she's just going to scream at the Garm anyway? Do TNT (Tegan and Turlough, is this nickname catching on yet?) need to know Terminus is at the center of the universe? The only new information is borderline hogwash about Terminus having caused the Big Bang. WHAT. Now, as a high concept, it's no sillier than Scaroth seeding life on Earth by accident, and even more epic. What's perhaps disappointing is that Terminus, as a piece of technology, disused though it is, doesn't sell that idea. The remaining engine seems too small to cause the predicted destruction of the universe, and production design finally fails the old timeship as the characters go into the Forbidden Zone and more and more sets are covered with black garbage bags to isolate them from others. And the idea of a second Big Bang just doesn't fit thematically with all the Norse mythology being thrown about. Ragnarok should be a great battle, not a simple explosion, as far as apocalypses go. Where's the Odin the Garm should consume in the end?

TNT still aren't allowed to participate directly in the plot, though it looks like Turlough's meddling causes Terminus' engine to go into a chain reaction. On the one hand, that would make the Black Guardian a bit more effective as a manipulator. On the other, it just doesn't make sense since they're not even ON Terminus. At least Turlough's subplot gets a chance to develop. He asks important questions about his ability to kill, questions that further put Tegan off, and anger the Guardian who surely must know by now the boy has reached his ethical limit. Structurally, setting TNT apart is a waste however. In her last story, Nyssa is robbed of a interaction with her best friend (who might have played the role of Olvir), and the Doctor is stuck hanging around with the cipher that is Kari, deathly dull in spite of her tremendous hairdo. There's almost no reason for the raiders to be in this story (as yet) when a couple of sidelined companions could have served the same purpose.

The Vanir are more interesting at least. Though there are too many to really make each one distinctive, we can't help but feel sympathetic towards Bor, played with innocent pathos by Peter Benson whom I just watched in a similar role in the BBC's Henry VI cycle as the eponymous character. Valgard and Eirak are dangerous presences, the former violent (though the fight choreography is still tepid) and the latter more manipulative and ruthless. Not a homogenous group, there is dissent, ambition and strife among them, and that generates more interest in these slaves of the "Company". I wonder if the Vanir were inspirations for Deep Space Nine's Jem'Hadar at all. Their hydromel is exactly like the Dominion soldiers' Ketracel White, just a little greener. The Company is short-changing them on the stuff, sending colored water, for example, giving the impression that we are indeed at the end of history as we know it. Entropy can be put off no more. Let the Lazars die, and the universe with them. It's like the story was written for Season 18.

VERSIONS: The DVD's CGI option includes better raygun effects, and adds an electrical component to both the Black Guardian's pain strike on Turlough and the energy discharge caused by the boy's sabotage... connecting the latter with the Guardian?

REWATCHABILITY: Medium - Playing for time, the episode is nevertheless rescued by the Vanir's performances and the last act in which things start moving again.
Doctor Who