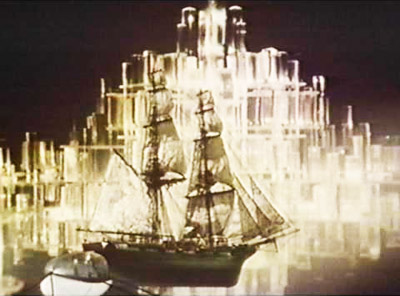 IN THIS ONE... The Doctor and Turlough win the race and are offered Enlightenment.

REVIEW: What are Eternals, thematically? Their true selves are a combination of role-players and audience, fascinated with the life of Ephemerals, who to them are characters in a game or fiction. Their physical selves are characters themselves - Striker, Marriner, Wrack - there's no way those are their real names or identities. As participative audience, they seek amusement, like us. Some go deeper, like Marriner's wish to know osmosis with Tegan. Though what he describes is akin to "love", what he really wants is to BE her. He's a fan. Wrack wants to be free of entertainment and believes Enlightenment will give her creativity and inspiration, freedom from the unoriginality of copying other creators and dependency to the work of others. Note how the Doctor can conjure up the TARDIS as a simple idea. Wrack's first mate, well, who knows. Musician Leee John is a terrible actor in this and better left unmentioned.

Of course, Enlightenment is a different thing to different people. To the naked eye, it's a clumsily put together plastic ball, or more of those crystals like the Black Guardian's communicator thingy. To the Doctor, it's something to be refused, as he works best as a Fool (Kinda's idiot) and knows it. To Turlough, it's a choice. A fulfillment of his greed for wealth and power, or friendship and loyalty to the Doctor. As either can get him home (in time), it's not as difficult a choice as all that, but for weak Turlough perhaps it is. He makes the right one and the Black Guardian literally goes up in flames. Good riddance. The White Guardian mentions a third meeting, which thankfully never came (it might be the Key2Time arc from the Big Finish audios). Tegan's not too happy about the new roommate, but he wants to be taken home, so why not?

Grand ideas, important character moments, and a bit of action too make the end of Enlightenment good fun to watch. There's no believing the outlined corpses shot into space are the Doctor and Turlough, of course, but it's not like that kind of jeopardy ever proves fatal to the main characters (silly Tegan). I do wish the Eternals had had more to do in the very final moments, in large part because I hate the Guardians, but I suppose it's a nice idea that it's the heroes who win the Eternal race after all. If I were Striker though, I'd be calling foul. Still, they have all of Eternity to play more games like this.

VERSIONS: The DVD release includes a feature-length cut with new effects and in widescreen format (which makes for a softer image, but the effect is slight) and it's quite watchable, possibly superior to the broadcast story. The main work was done on the race itself, creating cool CGI ships, multiplying the number of usable establishing shots, improving the choreography of the action, and even adding some grand sweeping and ethereal musical cues. Some sequences needed a lot of help and got it, including the near-crash into Venus and Turlough's capture by the Buccaneer, now via a net shot from a cannon. The meteor swarm is only okay, with unconvincing explosions on the ships' shields, while the arrival to Enlightenment makes the place look more like both a harbor and the Guardian communicator. The action is easier to understand in any case, whether it's the clipper pulling out of Venus' atmosphere or the Buccaneer's moonrakers unfurling. The new shots even fix some of the continuity problems, adding for example Wrack's ship between Striker's and the exploding bag of red opal shards, or simply a red glow emanating from ships about to be destroyed. Most of the rest of the additions are simply effects enhancements - distortions around the Guardians, various glows, flashes of light when Eternals "transfer" - but there are some questionable new effects. Replacing the eye with a CGI version with glowing red veins just doesn't fit the rest of the technology and is unnecessary besides. The bombardment of Guardian energy on the TARDIS fails to impress as well. One thing I'm surprised wasn't replaced is the starscape seen when characters are on deck, since so often they look like strung-up Christmas lights. Overall, an improvement, and overseen by the original director too. The Target novelization, for its part, is essentially the same story though it adds or changes minor details, for example calling the Guardians "Enlighteners" or giving Wrack a more varied collection of foci.

REWATCHABILITY: High - A clever enough ending to both the story and the "Black Guardian Trilogy".

STORY REWATCHABILITY: High - In any version, Enlightenment floats on a great premise and somehow wraps up Turlough's opening arc without it seeming tacked on.
Doctor Who