Katana's Batty Moment / How Killer Croc Got a Gun

July 25, 2013
Batman and the Outsiders 13 - Pages 9-13
So now it's up to Katana to keep track of a trauma-fueled, poison-maddened Batman on the run, because what, the three Outsiders who can fly can't just take off after him? I'm getting that old Outsiders feeling again. BUT. Credit where credit is due. Dan Day's layouts are pretty cool. He often mirrors pages (11 and 12, for example) and gives us three two-page spreads that you wouldn't get to appreciate the way I cut the panels up. So here's the first of the three, in small, for your viewing pleasure: 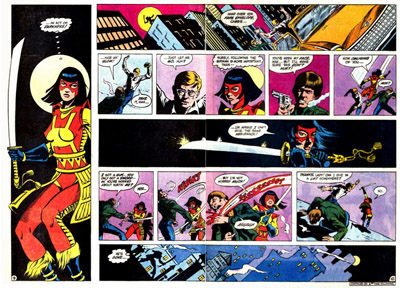 Now back to our story. As you may remember from last time, as soon as Katana got a fix on Batman, she looked down and saw...

Yes, Katana, lay it on as thick as you can. Darkseid is. Or in this case, a carjacker who wants a taxi's fare is. And not a very smart one.

If you're mugging people without a mask, then shoot the guy first and grab his cash. The situation makes no more sense than the lack of teamwork shown by Katana. You've got the eyeball, girl. This piddly stuff is what you tell Black Lightning to handle. You've got COMS! But then I suppose we wouldn't get a cool panel of her sword glinting in the darkness.

Yeah, she brought a knife to a gun fight, but it's a mighty big knife. And look! She finally used the slicing edge! ABOUT TIME! But like Kayser Soze, the Batman...

Wait, did she run back up to a rooftop before making that observation?! JUST CALL THE REST OF THE TEAM ALREADY!!! 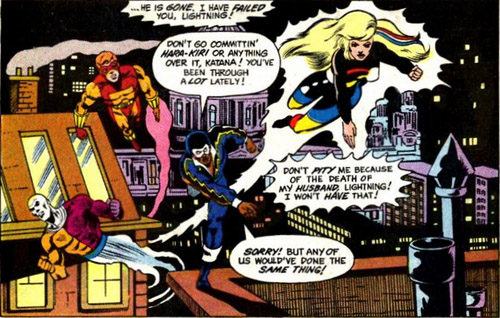 If that dialog seems at all disjointed to you, it's because it is. As expository recaps go, it fails to mention Katana just had to kill her husband in the previous issue. Ever the support group, Black Lightning is quick to act as a suicide help line for the swordswoman, because putting salt in a recent wound is exactly what she needs right now. Plus, didn't you just get off a "killed someone" depression subplot, so I'm sure you WOULDN'T have. And now for the Outsiders Loose Lips Sink Ships Moment of the Day, brought to you by Katana's book store:

This hood who was about to break into a building for admittedly no reason other than this is Gotham City and you don't want to live there, has just heard Katana rambling about Batman's weakness. Like he doesn't have any enemies in town. Cut to a familiar Athletic Club. 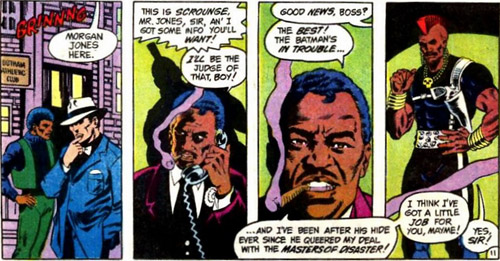 Yes, that is Morgan Jones from issues 9 and 10, now more clearly a black man (no really, flip back to his first appearance, when he just looked Italian). He's the Outsiders' archenemy (again, really, he's their only recurring foe to date and for a while yet), and since his association with the Masters of Disaster, seems to have surrounded himself with wannabe supervillains. Why else would that two-bit burglar call himself Scrounge and that Mr. T look-alike dress halfway between Tyr and an agent of SHIELD? Mayme?! Oh you have got to be kidding me!

Meanwhile, the Batman is TRIPPING BALLS. 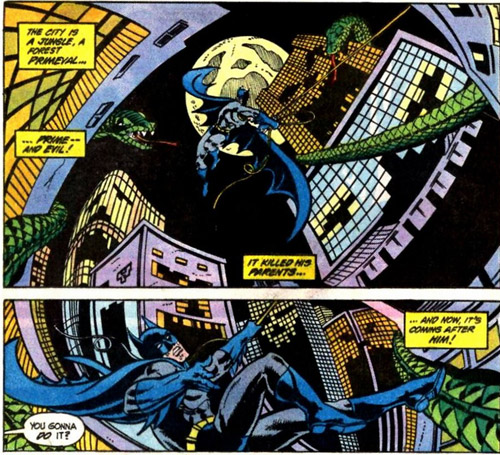 I don't think it looks like a "forest primeval", but then I live on marshlands, what do I know? Though there are apparently giant snakes and evil Atari-game buildings threatening him, Batman focuses on a couple of kids who went halfsies on a gun and look to be about to rob a liquor store. Again, because Gotham. 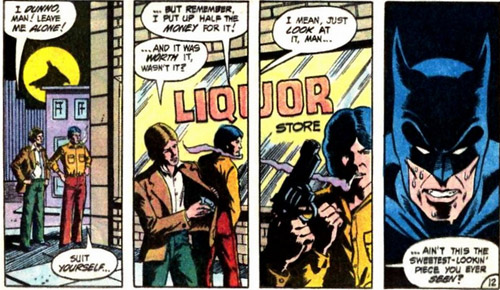 There's a crime on every street corner. Some can be prevented with judicious use of shadows, however.

Shouldn't have eaten that greasy chicken before doing the job, dude. They lost the gun, so Batman lets them go. I guess they don't look like snakes or anything. And the gun?

In Killer Croc's domain now. [I HAVE NOW FULFILLED THE CONTRACTUAL OBLIGATION OF MY POST TITLE.] The guys leave the liquor store alone and decide to "get some girls", which to me sounds even worse. Thankfully, they aren't seen again, so we can suppose they were as bad at picking up as they were at, y'know, holding on to objects specially made with a grip.

Next, the Outsiders get maymed! But give me the weekend to do other stuff. I'll see you Monday with all the Outsider action.
Batman Comics Outsiders

A t-shirt slogan if I've ever heard one.

Martin Gray said…
Everyone in Gotham must be nuts to live there. Or most DC cities, but especially Gotham.

Siskoid said…
For me, the Outsiders, Infinity Inc. and New Teen Titans all get lumped together because of the DC Heroes RPG which produced many adventure modules for those three team because they were comparable in power to Your Own Heroes(TM) (you could play at higher or lower power levels, but the game worked best at this sort of mid-strength, I guess heroes who had to team up because they weren't strong or deep enough to take on big threats by themselves).

While Infinity Inc at least has a unifying concept (children of the JSA), the Outsiders and New Titans do not. They're just collections of powers and skill sets necessary for superhero team action and soap opera. The diversity makes them feel like a role-playing game "party", disparate heroes created by disparate players. I never bought the Outsiders reason for teaming up (they are NOT really "outsiders"), just as the Titans lost some luster for me as soon as they weren't just current or former sidekicks anymore (and that became worse when they weren't even teens anymore).
July 27, 2013 at 1:24 PM