RPG Next: The Justice Legion 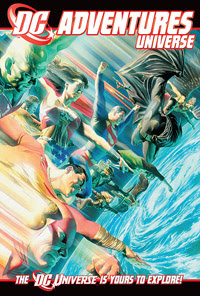 Our "season" of Doctor Who role-playing wrapped last week and I'm obviously looking ahead to the next stage of my group's RPG activities. One thing became sadly apparent over the last couple months: Despite everyone who came to play even a single game had nothing but praise for the campaign, only two players ever committed to it to full time, and several adopted the dreaded opinion that "I'm not interested in Doctor Who, ergo, I am not interested in this game". So our Doctor Who game will rest for a while (we're still doing a Special sometime this summer), but I'll be trying something else for the next couple months.

One game that almost immediately collapsed in the last few years was an attempt at Green Ronin's DC Adventures. While I liked the chargen process, it was just too much work to derive any given villain I wanted to use, and the sourcebooks took years to come out (the last of three just came in the mail). The other problem was the d20 derivative used by the game, which made combat overlong and overmathematical. After two sessions, I sort of gave up on it, though I did tell my players I might return to it once the sourcebooks had all been published. That's happened, but it also fixes only one of my problems. Some months ago, I'd started working on a DC Adv to DC Heroes conversion (well, not so much a conversion as a way to use DC Adv stats in DCH) because the latter had always been my favorite supers RPG system. After 8 weeks of DWAITAS (Doctor Who: Adventures in Time and Space) and how easy it was to use even for complete rookies, I've instead combined DWAITAS and DCAdv. Essentially, the DCAdv stats can stand as is, but are made to work with the DWAITAS system. So for example:
-Initiative is all DWAITAS because yeah, comics are full of talk before the fight begins.
-I've done away with secondary attributes and damage is applied directly to main attributes.
-I've retained the levels of success and failure from DWAITAS because they're a lot more fun, though difficulty numbers are based on DCAdv difficulty.
-Skill use is Skill+Attribute+2d6, while Powers are just Powers+2d6.

No, I don't expect it to be perfectly balanced, but I'll tweak things as I go along. The point is to keep my fun storytelling style and easy-to-learn system, while simultaneously having a huge bank of ready-made characters.

The Campaign
Chargen (character generation) in supers role-playing is usually a pain-staking process. You need a strong concept, you need to stat it out... If I did things like I usually do them, summer would end by the time we sat down for our first game. I plan to make use of the ready-made character bank instead. The problem I would expect there is that players often feel like they don't know the actual DC characters enough (though in the past, when I've lent someone a DC hero to guest-star at one of my games using Players' Own HeroesTM, it's always been a hoot and we still have fond memories of Red Tornado, Plastic Man, et al. which puts the lie to that notion). Still, when it comes to playing in the contemporary (I guess here we would say pre-New52) DCU, been there, done that, and players can be hamstrung by continuity even if it is no longer evolving. The most recent DCAdv book, DC Adventures Universe, gave me a crucial bit of inspiration. DCAdvU details DC's cities, planets, dimensions and non-present eras (not unlike the old DCH Atlas of the DC Universe), but the future of the DCU, aside from the Legion of Super-Heroes' 31st century, is pretty sketchy. In fact, it's a gaping hole.

Now, I must stress that I had this idea BEFORE Justice League 3000 was announced, so my inspiration was really the Batman Beyond universe (as well as the Valentino version of Guardians of the Galaxy): Why not create a team of legacy heroes from the early 28th century to fill the historical void? All characters would be strongly based on pre-fab characters from the books and would fit into one of these three niches:
-Legacy heroes inspired (or related) to heroes (or villains) from the past (players are encouraged to put a twist on the concept, like changing gender, race, species or moral code)
-Heroes from the past who are still living somehow (long-lived, immortal or somehow transported from the past)
-Precursor heroes strongly based on Legionnaires that can retroactively act as those Legionnaires' inspiration (for this reason, I'm not accepting kid heroes, only adults, so the Legion can still base itself on Superboy)
I also asked prospective players to name two or three OTHER characters they'd like to see in the team, so this "Justice Legion" can have many members covering a whole sector or space and not be limited to the game's core players (which would turn it into little more than a quintet). As it turns out, loyal player Pout once said he'd like to take on the challenge of playing a different character each session, so graciously accepted to fill out those roles. Some he suggested himself, most will come from other players, but the larger team WILL be represented.

But I wasn't done. Another campaign I've thought a lot about was a Star Trek RPG that did away with the massive ships with hundreds of crew members. So I'm combining all these ideas together, with half the games geared towards superheroics on Earth (New Gotham sounds like a place unlike Metropolis it might be nice to explore, on an Earth on the cusp of utopia but not quite there yet), and the other half owing much more to space opera with Khunds in the role of Klingons, and Dominators as Romulans (or something). Whatever a ship can do, a superhuman can do just as well. Break out the transuits and flight belts, and we're off.

The Characters
Several of the characters have already been decided, and I've decided to source images from Elseworlds, Internet redesigns, wherever I can to give them the proper futuristic sheen. If you read all of the above, you certainly deserve some eye candy.

I'll be playing a mission coordinator figure, so Brainiac 4 (yes I'm ignoring the female character of the same name): 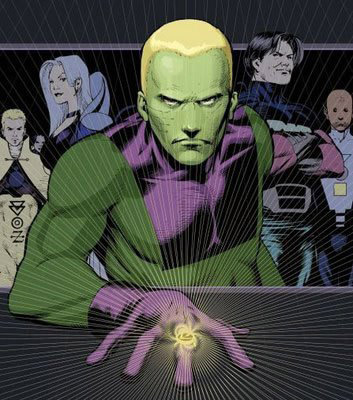 Furn will play the team's Green Lantern, an old veteran of few words seen but not described in the Sinestro Corps War: 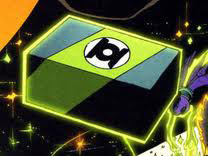 Marty has a love for the Legion I wasn't expecting, and for Ferro Lad especially. But let's make it his great-grandfather Ferro Man instead, ok? 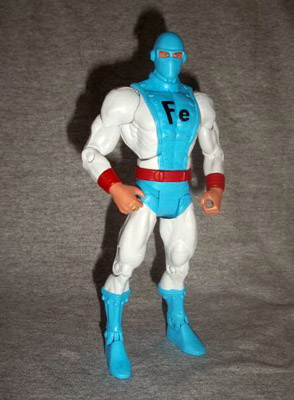 Fred is away in Montreal and can only play via Skype, so he's chosen Oracle, which I see as perhaps Barbara Gordon's memory engrams as computer virus. I'll also be putting Oracle in a Computo/Skeets-type "body". 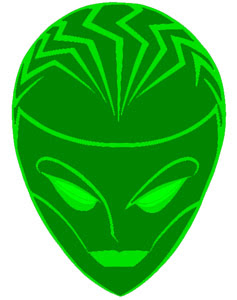 Pout's got everybody else, which to date gets us to about 20 members (though I do expect other players). Here's a montage that includes the Question (conspiracy theorist and super-connection maker), Dr. Fate (Nabu's helmet would have survived), Wildcat (alien?), Martian Manhunter (still alive?), Aaron Strange (Rannian descendent of Adam), the Demon, Grundy (turned hero), Atom-Smasher (legacy), Matthiew Mallah (goodie descendent, because we really wanted an ape in the team), Joker (legacy), Plastic Girl, Fennec (a male version of Vixen), Man of Steel (Superman's legacy, but really Steel's), Firestorm (using protocol logic) and Hawkwoman (Thanagar needs a member). 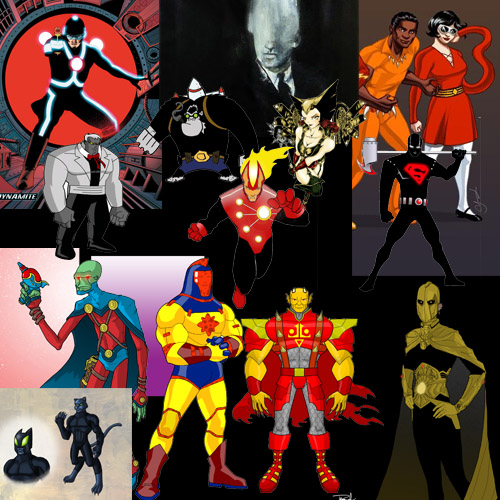 With Pout's motley crew/NPCs, I'm pretty much sticking to the books' stats as they are (with a few clever exceptions), though I've been more flexible with "main characters". Ferro Lad is sadly missing from the books, and obviously, so is the brick. Still, they were pretty easy to derive from existing characters.

So that's the Justice Legion, I'll let you know how it turns out.
RPGs

Dale Glaser said…
This sounds flipping brilliant. I wish I lived anywhere near you and could invite myself into your gaming group! Oh, and that I actually had free time for gaming. :-) Looking forward to updates on the campaign.

Philo Pharynx said…
It's good to see somebody embracing the essence of DC. It's just not a DC game is everybody is unique. Part of the world is that most of the characters have a family, a legacy, or some other connection to people.
July 3, 2013 at 1:26 PM

Siskoid said…
Thanks Sunny! Maybe we can work something out someday. I might start running Skype/G+ hangout games in the future, who knows?

Wild Card said…
Inspired by the Justice League, will be inspirations for the Legion. I like how that fits in, does not invalidate the Legion and gives you a LOT to work with. Just keep Ferro Man away from any Sun Eaters, please.
July 14, 2013 at 12:31 PM

Pun Isaac said…
This sounds like a fantastic idea. I would jump at the chance to get to play something like this.
July 15, 2013 at 6:48 PM