Who's the Earth-2 Insect Queen? 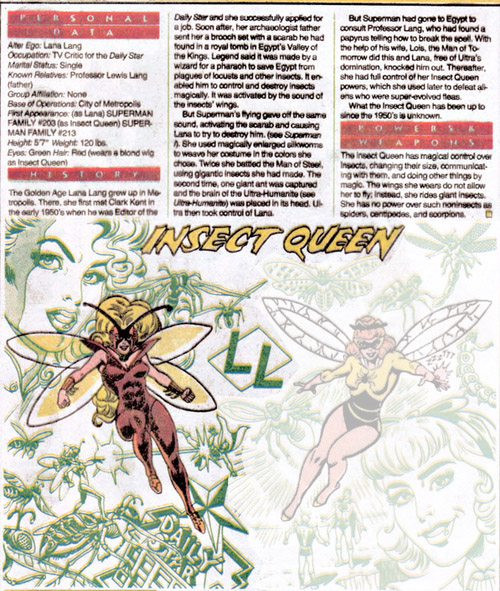 The facts: Lana Lang first became Insect Queen in Superboy #124 (1965) and then sporadically after that (an identity not so obscure thanks to its appearance in Alan Moore's "Whatever Happened to the Man of Tomorrow?", but that was on Earth-1. The Earth-2 Lana Lang appeared only as late as Superman Family #213 in 1982, in the Mr.&Mrs. Superman strip that featured Earth-2 Clark Kent as editor of the Daily Star, early in his marriage to Lois Lane. And in that first appearance, she immediately became Insect Queen. The story ran until #215, after which Lana was seen in the background in at least one more strip, and as Insect Queen helping Superman subdue aliens evolved from fleas in #222. (The Earth-2 Lana Lang should not be confused with the Golden Age Lana Lang, as Lana first appeared in 1950's Superboy #10. This Lana, though born in the Golden Age, continued directly into the Silver Age and is Clark's school friend from his Smallville days. The Earth-2 Lana does not share this history and was born and raised in Metropolis.)
How you could have heard of her: Well, aside from Who's Who and a one-panel appearance in Crisis on Infinite Earths #10, there's really no way except for fans of the Who's Who podcast.
Example story: Superman Family #213-215 (1981-82) by E. Nelson Bridwell, Irv Novick and Frank Chiaramonte 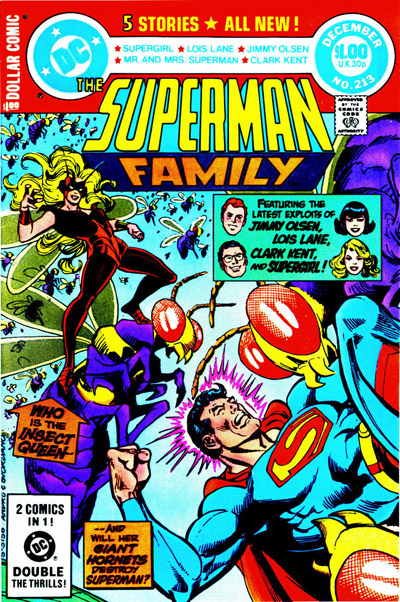 The details of Lana-2's only major story are well-detailed in the Who's Who entry above, so I'll stick to the highlights. No sooner has Lana-2 been introduced as the Daily Star's TV critic that Lois is remarking on her Egyptian broach, given to her by her archaeologist father (perhaps we should call him a grave robber if he's handing out priceless artifacts to family members). The broach was apparently worn by a pharaoh who, as legend would have it, protected his lands from locusts with it. When Clark changes into Superman and flies out a window, the sound registers as that of a swarm's wings to the broach and Lana becomes possessed.

Possessed by a deep need to stop the threat detected by the broach and possessed with the power to biggie-size insects and control them. But a girl must accessorize for this kind of work, so Lana flies to the countryside where would-be silk merchants once introduced silk worms from Asia into the ecosystem (don't do this at home, kids). And giant hypnotized silk worms are PERFECT for manufacturing superhero clothes and wigs. 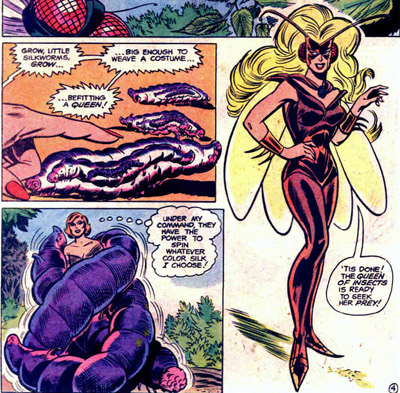 It's gross, yes, but so soft and light on the skin! Because the broach is magic, Superman has trouble defending against Insect Queen's giant hornets, but the mysterious villain goes away once he falls. He recovers, Lana wakes up in the woods, and Clark is shocked to see the Queen's broach on Lana. Could it be?! Cue Lady Luck and some photographer who got a giant pic of the Queen. 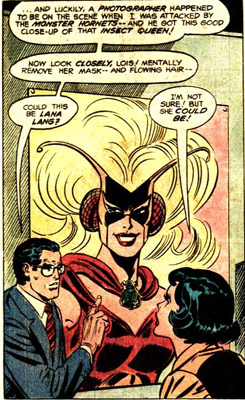 In a world where you can't recognize a superhero when he's wearing glasses, there's no way to pierce the Queen's magical mask. Another incidental WHOOOOSH from Superman, and Lana's riding a giant mosquito into battle again, and this time, a strange craft uses the confusion of Superman's buggy battle to steal a giant flying ant and put the Ultra-Humanite's brain in it! 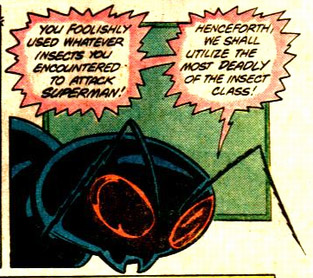 Controlling insects by controlling the Insect Queen, the Ultra-Humanite attacks Superman with giant killer bees, but having obtained the cure to the curse from Professor Lang, Mr. and Mrs. Superman lift the spell off Lana, which also breaks Ultra-Humanite's control. Waking up in the sky riding a giant flying ant? No problem, says Lana-2. 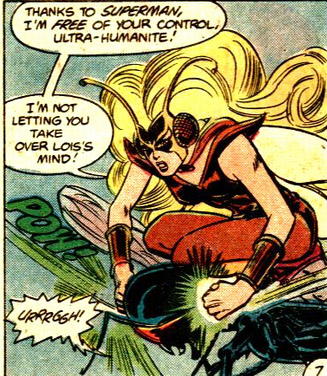 Yet another example of Superman's supporting cast taking all kinds of risks because nothing can ever happen to them in Metropolis. He's really created a dangerous dependency there (on both Earths). And what happened to the Ultra-Ant? Vanished. Or did it..?

By his next chronological appearance, his brain would show up in a giant mutated albino ape, though the story was published before this one. We can only assume some minion was running around Metropolis' alleys holding a giant ant head like a football.

As for Lana-2, she was obviously allowed to keep the broach and used it again, and I must say, her powers and costume are a lot less silly than her Earth-1 counterpart. Other Insect Queens have appeared in DC Comics since then, including an insectoid alien villain in late 2000s Superman comics, a Legion-era character called Lonna Leing (yeeech), and looking the most like Lana-2 in her red costume, a member of Justice Underground, a team of heroes who oppose the Crime Syndicate in the Anti-Matter Universe.

Who else? Oh I don't think we have to go very far for our next target. How about a villain who'd only appeared twice before Who's Who, and barely at all since?
Comics Superman Who's This?