Who's the Immortal Man? 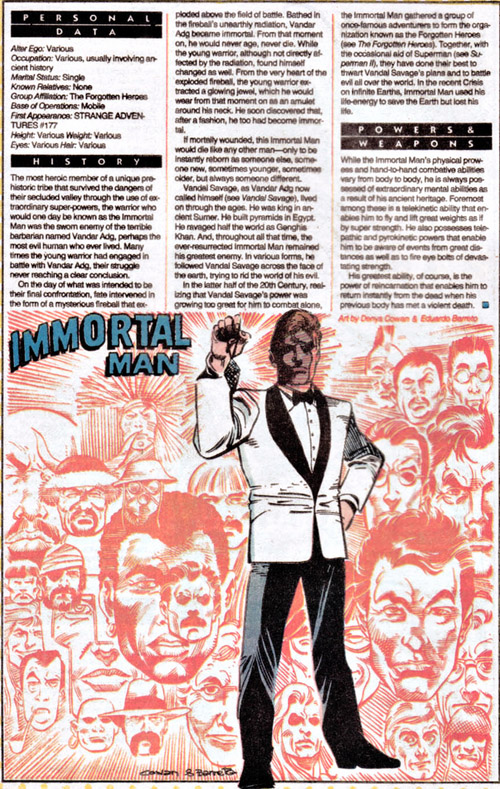 The facts: First appearing in Strange Adventures #165 (1965), the Immortal Man would feature in three more adventures (in 185, 190 and 198), each time getting the cover, though his monicker only appeared from the third story. After 1967, nothing until 1984 when he appeared as a member of the Forgotten Heroes in Action Comics #552-553 (which was when they tied his origin to that of Vandal Savage) and DC Comics Presents #77-78. He met his final fate in Crisis on Infinite Earths #10, getting erased from existence, something from which you don't reincarnate, apparently.
How you could have heard of him: Aside from crowd scenes in Morrison's limbo and Forgotten Heroes flashbacks, there have been a couple of attempts at bringing back the Immortal Man. In 1991's Flash #48 and 49, Wally West meets a woman who may or may not be the Immortal Man's first female body (Doctor Who fans take note!). And there was some question as to whether the Resurrection Man had any link to this older character, proved false in a flashback in which Immortal Man was erased from existence in post-Crisis continuity. Most recently, he was seen as a member of the Society of Super-Heroes of Earth-20 in Final Crisis: Superman Beyond #1.
Example story: Strange Adventures #185 (1966) 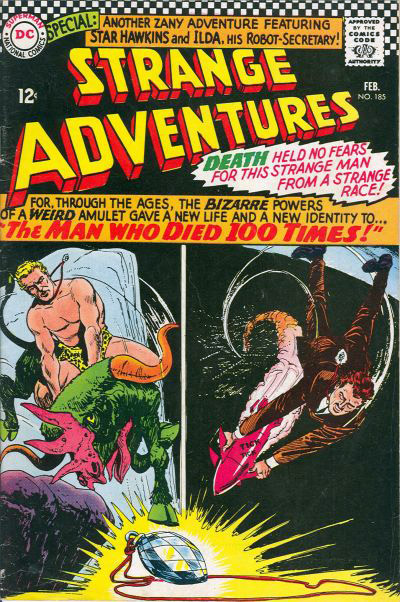 At 16 pages, the longest of his four original strips, "The Man Who Died a Hundred Times" by Dave Wood and Jack Sparling, follows the original 6-page story that had ended with the protagonist's death. He's not the Immortal Man because he's impossible to kill, or even because he heals from his fatal wounds like Captain Jack Harkness. No, his power is instant reincarnation. Sometimes as a child (as in the first story), but usually, fully-grown!

A blond Tarzan? This power is whack! It's all thanks to that amulet he wears around his neck and that follows him from life to life, helping him remember the time he made a telekinetic bridge for Attila the Hun and so on. Because yeah, this thing also makes him super-strong, gives him hypnotic, TK and pyrotechnic powers and allows him to fly. So blond Super-Tarzan pacifies an angry lion and for his next trick, saves archaeologists from an elephant stampede. 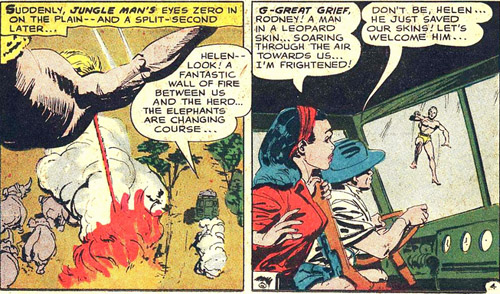 These are Rodney and Helen Phelps, Brits on a treasure hunt for an ancient helm somewhere in an African cave. Helen is a pretty treasure herself, so sure, "Jungle Man" will help her (seems these personae don't come with identification papers). It's a dangerous quest too because there's this middle-eastern type, or possibly Indian, called Karat who's trying to grab the helm and its magic powers for himself. He gasses the goodies, but Jungle Man isn't phased by it. 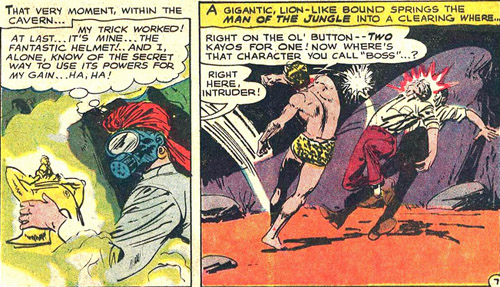 Karat retaliates by using the helm to create a strange, bucking creature that might have gored the Phelpses if our hero hadn't ridden it off a cliff, likely with some rodeo knowledge he picked up in another life. Except...

...he's a bit accident-prone. That's the only way to write reincarnating heroes really (Resurrection Man is the same). So is it all over? Well, in most Immortal Man stories, that'd be it, but see how the villain wasn't actually defeated? Oh, Jungle Man had time to snatch the helm and deliver it to the archaeologists, but Karat wouldn't give up so easily, right? Well, right, as we're about to find out when the Phelpses return home to England where the Immortal Man has just been reincarnated:

Right in the street in front of all those people? Makes me wonder if he actually takes over someone else's body, killing them on the spot. Or does the new persona just appear out of nowhere, cloaked in "don't notice me" magic? That's not explained. What we really need is a guy with the plot on a cue card to tell us.

Wrong cue card, but thanks for filling us in, dude. The still identity-less Immortal Man becomes Mark King, expert in rare treasures, someone he once was 100 years ago, a good cover to check up on the helm, encourage the Phelpses to donate it to the museum as soon as possible, and maybe court the beautiful and insightful Helen. She can subconsciously sense her noble Jungle Man and Mark King are one and the same, and is drawn to him. He's even thinking of marrying her, not getting killed for a while, and tell her all his secrets. But then the helm is stolen by Karat and used to steal the royal jewels, so it's back into life-threatening action for our hero! 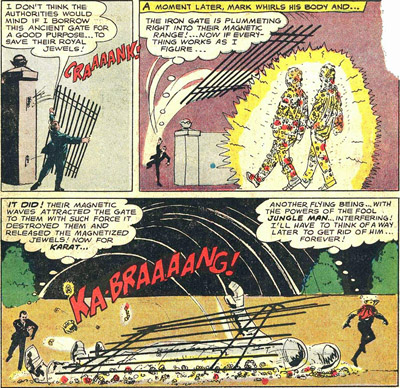 The next evening, I think "Mark" is about to propose when his "super-alert ears" pick up the sound of a burglar alarm which he immediately identifies as coming from the British Philatelist Society, home of the greatest collections of rare and valuable stamps on Earth! STAMPS IN DANGER?! NOT ON MY SHIFT! The Immortal Man once again puts his happiness on hold by flying over there and finding Karat stealing postage with the helm. And zap, he creates a missile that flies out to destroy London so as to keep the Immortal Man occupied. Mark punches him out and melts the helm before flying off in front of his eagle-eyed bride-to-be. 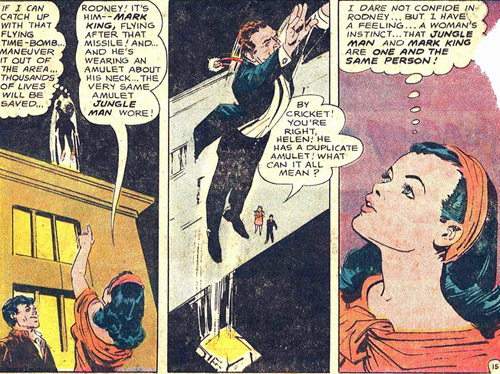 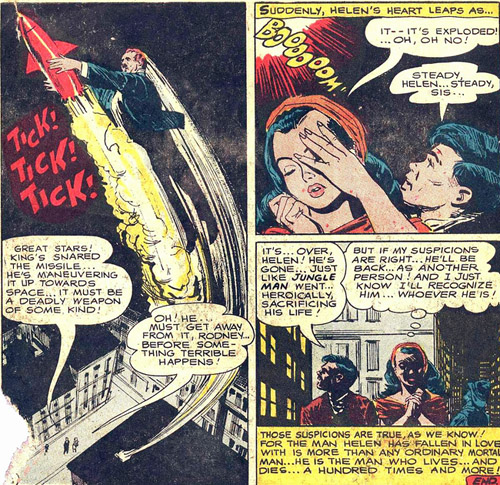 You tell yourself that, sweetheart. He's not dead, he's just resting. And you'll meet him again in some other life. And hopefully, he'll be tall and handsome still! And indeed, they did, and he was. Helen would appear in both of the Immortal Man's appearances, on the look-out for her "spice of life" beau.

If I were DC, I'd revamp this character, take out the super-powers, and develop it as a TV series with a rotating star. What. I've seen worse high-concept shows.

Who else? The Inferior Five have been mentioned, but they're way too infamous to truly be obscure. And yet, my next target IS a well-known character, except she isn't. FOLLOW THE CLUES NEXT WEEK!
Comics Silver Age Who's This?

Unknown said…
I'm gonna guess (badly) that next up is Jonni Thunder.

Also, I just noticed that the Western hero Johnny Thunder is listed as "Johnny Thunder II" despite having used the name some 30 years before the charter JSA member was born.
July 9, 2013 at 2:26 PM

Wonder if the Human Target had a who is who.