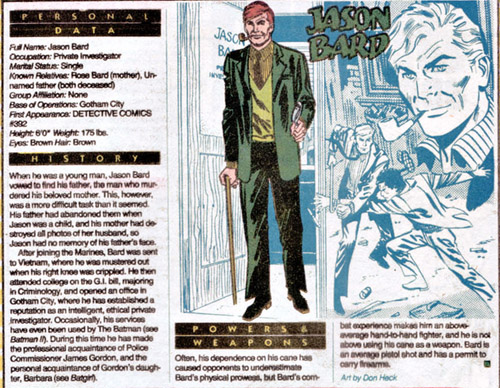 The facts: Jason Bard first appeared in a Batgirl back-up in 1969's Detective Comics #392, by Frank Robbins and Don Heck. He would become a mainstay in her supporting cast through the 70s, and he even appeared in his own Detective back-ups. I have to admit to a personal blind spot here. Jason Bard appeared in a lot of comics both before and after Crisis (see below), and doing research I realized I have quite a few of them, but somehow it never registered when I was choosing Who's Who entries to cover. Still, I think it'll be interesting to look at what his back-up was like.
How you could have heard of him: The Crisis reboot made him a former cop rather than a Vietnam vet, and he more than dated Barbara Gordon, he was engaged to her. She broke the engagement after the events of the Killing Joke, and he never knew why or even that she'd been paralyzed until they met again in the pages of Birds of Prey, where he made occasional appearances after that. He's also appeared in issues of Robin , Red Robin, Batgirl Year One (where he was involved in her origin story), Batman, Detective Comics, Justice League: Cry Justice and even Firebrand. Told you he appeared plenty, right under my nose. A Jason Bard has appeared in Young Justice too, though he's still a soldier and not yet a P.I.
Example story: Detective Comics #425 (1972)

This is Jason Bard's first solo case; he even admits to having to neglect (current candidate for U.S. Congress) "Babs Gordon" (does the nickname make her more electable?). And it begins with him waking with a start when his clock radio inform him that an old army buddy, Matt Clay, escaped from a private sanitarium and is considered armed and dangerous. 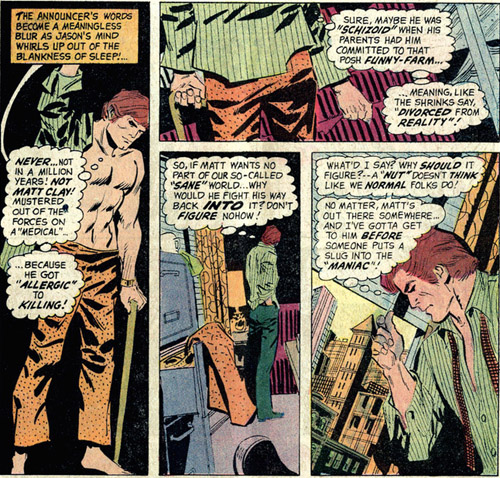 The following sequence tells us four things: 1) Matt Clay wasn't committed for violence but rather an incapacity for it. 2) Jason Bard is big on ironic quotes, something his Who's Who entry failed to tell me. 3) Why Barbara would go for him; he's hunky. And 4), no matter what Don Heck's weaknesses are at doing superheroes, he's quite strong with the real world and real people. Now back to the case, as Jason visits Matt's shrink for more information.

Yep, the shrink has just been shot when Jason gets there, and according to the nurse/secretary/Diana Prince fan, it was Matt Clay that did the deed before racing off. Next stop, the Clay family home, where Jason learns from an informative mailman Matt's folks are spending the month on the Riviera. But the house's door is ajar (which could mean any number of break-in scenarios given the mailman is loose with this kind of information... IN GOTHAM), so Jason goes in... where he's soon attacked by the unhinged Matt Clay! 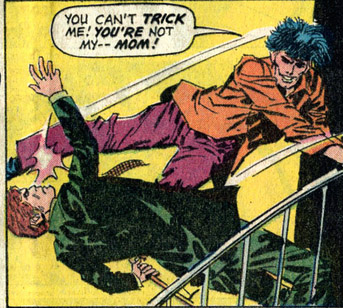 After a struggle that involves a room full of creepy dolls and Jason's trusty cane, our private dick is... SHOT IN THE FACE!!! 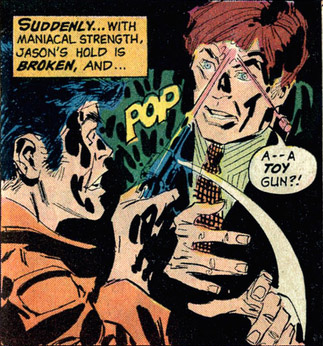 Phew! It's only a toy gun, which Matt immediately surrenders to Jason, who delivers the poor guy to the awaiting cops. While he goes out to nab the REAL killer. Well, we haven't met very many characters, have we?

It HAS to be Ms. Wilson, and indeed it is. She disguised herself as Matt's mother, broke him out of the asylum, stole a guard's gun there, and used it to kill her boss who had discovered she was blackmailing patients with their case files. But how did he know it was her? Did YOU see the crucial clue? I included it in the panels above. Solution below: 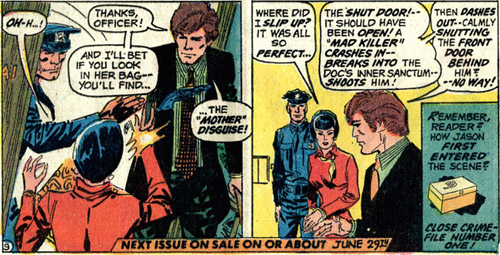 Love the wrist slap from the cop! I bet she'll get more than that from the court though! So a simple mystery at 9 pages, but a well-crafted one the attentive reader can actually solve, with some nice overwrought noir narration and frankly engaging art. Are there enough of these stories to publish in a thin collection?

Who else? Though it looks like I might've skipped Jason Bard, there's another half-pager a few pages later that surely deserves a turn. Stay tuned!
Comics Who's This?

American Hawkman said…
I genuinely loved the post-52 take on Bard as Batman' s day operative... Bruce considered Bard to be the equal of Roy Raymond, Ralph Dibny, and nearly of himself. The setup was a great character moment for Bard.
July 31, 2013 at 6:37 AM

Anonymous said…
He passed from being a Vietnam vet to being maimed by a Killer Moth wannabee. You still believe the Crisis was an improvement?

American Hawkman said…
ACK! Didn't know that part of the retcon. I could have sworn I'd seen his story updated to Afghanistan elsewhere, so maybe that didn't stick.

At any rate, you may want to track down those Batman trades at some point. Bard' s character bit was a great one, as was Detective Chimp and the Riddler unknowingly being Batman's cold case squad. Also, of course, there's the best Joker story in the past decade as well. :)
July 31, 2013 at 2:54 PM

Siskoid said…
I think the Killer Moth business is in Batgirl Year One, and how they met.