Who's Nelvana of the Northern Lights?

July 04, 2013
Who's This? She's one of the world's very first female superheroes and not a DC character, so of course not in Who's Who. I'm hijacking this feature in the wake of my post on Golden Age Canadian Comics is all! 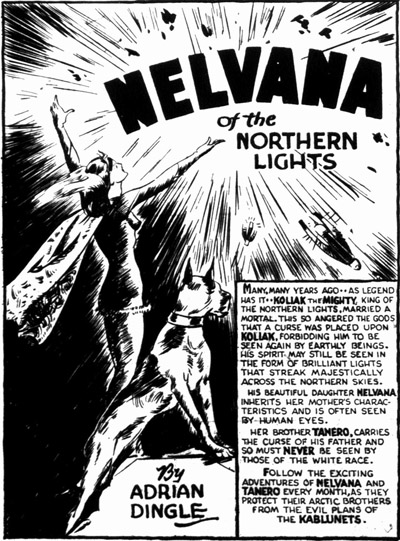 The facts: Nelvana, the first Canadian national superhero and one of the first female superheroes ever (beating Wonder Woman by 4 months, but not Fantomah, Invisible Scarlet O'Neil and  the Golden Age Black Widow), appeared in 1941's Triumph-Adventure Comics #1 (simply Triumph Comics from #6 on) through 1947's #31 in six serialized stories (with one chapter appearing in Super-Duper #3 between #29 and #30. The creation of cartoonist Adrian Dingle, Nelvana was based on actual Inuit legends reported by Group of Seven painter Franz Johnston, which makes the strip EXTRA-Canadian, folks. Basically, he gave the mythical Koliak, King of the Northern Lights, a beautiful superhero daughter.
How you could have heard of her: If you were a stamp collector in 1995, Canada Post came out with a series of superhero stamps that included Superman, Captain Canuck and yes, Nelvana. Name sound familiar? That's because John Byrne paid tribute to the character by naming Snowbird's mother Nelvanna of the Northern Lights (extra "n"), daughter of Hodiak (close!).
Example story: Triumph-Adventure Comics #1 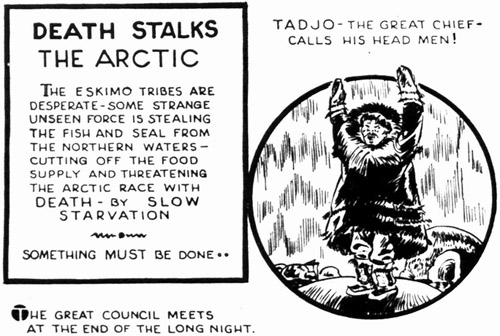 "Death Stalks the Arctic" starts with an extended four-page sequence of Inuit tribes congregating on a remote spot, losing dogs along the way, and building igloos before summoning the goddess of the Northern Lights for help. She MIGHT think about making herself a little more accessible to her chosen people, but when called, she does appear, in a flash of aurora borealis. 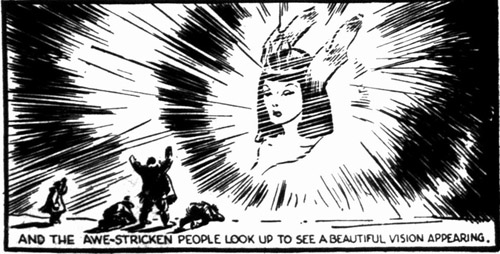 Soon she's regally gliding down a ray of light where Mighty Chief Tadjo tells her about an evil force robbing them of their food sources, land and sea animals no longer there to be hunted. They face famine. This isn't a job for Nelvana alone, however. She summons her brother Tanero, who appears as a blond young man in spandex! 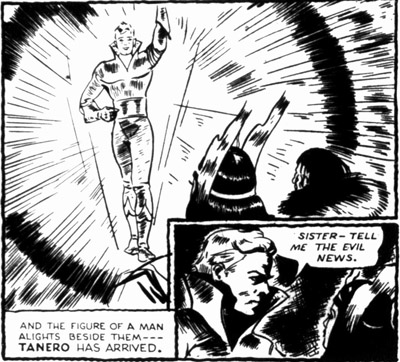 Ok, maybe we should address some of the 1940s racism inherent in these stories. First, the Inuit are called Eskimos, which today is a pejorative. No one ever called themselves that, it was a word akin to the Greeks' "barbarian", something you called others. And now Nelvana's brother is a white guy, though I prefer to think of her as Inuit. Her father is an Inuit god, after all. But Tanero... "Canadian whites" indeed. With the colors, who knows? His hair could be silver, for all we know. And we DO know is that he likes his news evil.

Just then, they hear an explosion near the shore and deduce this is obviously the work of Kablunets (a word that means "evil white ones"), which forces Tanero to disguise himself, for like their father, he is cursed never to be seen in his true form by the white man. With the help of her magic cloak, Nelvana does the only reasonable thing under these circumstances - she turns him into a Great Dane. 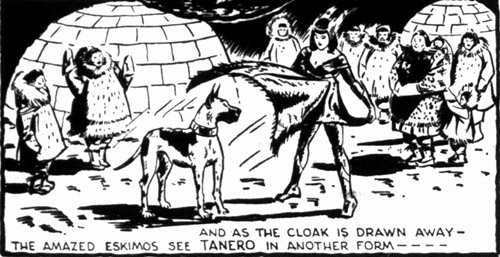 Not a talking dog either. While in some pictures she seems to ride the pooch, she really only hangs on to his collar while he flies around.  That's MUCH more sensible. At the shore, they find the white poachers dropping time bombs in the water, bombs that pulse with light attracting everything from whales to seals to polar bears (all your main sources of delicious blubber), killing them in one go. Nelvana will have none of it. She implores her father, the Northern Lights themselves, for the power to defeat these enemies, and through his will forms a huge magnet made out of auroras!

She magnetically pulls all the bombs out of the water so they can detonate harmlessly, but she draws the ire of head Kablunet, Toroff (Russian?) who calls all ships to kill the dog, but bring the girl back alive. 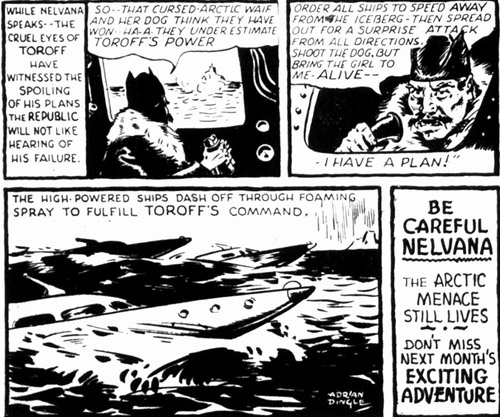 I don't have access to all her adventures, but according to my research, over the next 7 years, Nelvana would visit the underground kingdom of Glacia, team up with Johnny Canuck, travel to other dimensions, fight the Axis powers, and adopt the secret identity of secret agent (very secret then) Alana North. I'll try to bring you as much of that as I can in future installments.

Who else? Well, these early issues of Triumph also feature such Canadian icons(?) as Spanner Preston, Clue Catchers and Tang the colt. Maybe they should see some play on this here blog? Or what about other Golden Age Canadian heroes?
Canada Comics Golden Age Nelvana of the Northern Lights Who's This?

Anonymous said…
Small note about "Inuit": not all First Nations of the North are Inuit; over in the far west you've got the "Yupik" peoples and even some "Aleut". So preferred terminology gets a little complicated, and "Eskimo" is even occasionally the preferred term:

I'll agree with you that "Inuit" is almost certainly the right choice in Nelvana's case, but the matter is more complicated than a single universal word substitution.
July 4, 2013 at 10:27 AM

Siskoid said…
I completely agree. There's Innu as well, and an overarcing term might simply be First Nations, though that's too broad in this case.