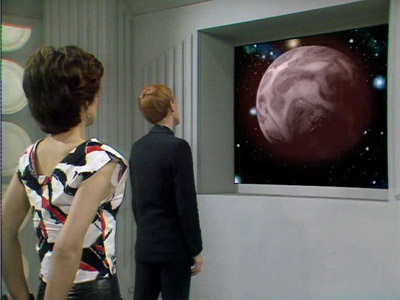 IN THIS ONE... The TARDIS lands on Frontios, a doomed Earth colony suffering bombardments for the last 30 years.

REVIEW: Chris Bidmead is back writing for the program and you know this because the episode title is simply the name of the place the Doctor visits, and because there's some weird stuff going on with the TARDIS' interior dimensions. That does provide a pretty cool cliffhanger when the Doctor finds his ship "destroyed", only the hat stand remaining in a pile of smoking debris. There's also a strange bit about being "too far in the future" and the Doctor insisting on being there "unofficially" (see Theories), but otherwise, this is a pretty straightforward Earth colony story. The colonists' numbers have shrunk to dangerous levels first by the initial crash, then by a plague and then frequent bombardment at alien hands. Except the invaders never come. And for the Doctor and friends, there's jeopardy in even trying to help these people as paranoia runs rampant and their leaders suspect the time travelers of being some advance party.

Bidmead does create an intriguing set-up, and while the effects used to create Frontios aren't consistent (does it have a red sky or a bright white one?), the production team manages to build this world high if not wide or deep, with scenes taking place in the caves below and the top of the crashed ship above. The Doctor's need to help these people when he knows he shouldn't (again, see Theories), and in an actual doctor's capacity, speaks to his nobility, while Tegan and Turlough find plenty of grunt work is to be done getting an acid jar from the ship to help power the lighting in the makeshift hospital. Unofficially, you understand. The colonists fall into two camps - a paranoid military government led by the royally (and oddly) named Plantagenet, having inherited the seat from his father (now a Big Brother poster), and kinder-hearted scientists like Range and his daughter Norna. I suppose there's a third camp, bored and ambivalent, as presented by the placid Cockerill. And a fourth, unknown power is of course responsible for making a lot of top soil explode on the planet surface. A simple set-up, with plenty of opportunities for conflict.

THEORIES: Frontios' date is not known, but the Doctor says it's at the very edge of "our" knowledge, by which he must mean the Time Lords, and takes the TARDIS out of the vortex lest they go too far into the future. And though he does find himself helping, he's very anxious about anyone finding out he did. This is apparently the last of humanity, and whether it survives or not is, presumably, an unfixed point with an unknown outcome. He can't interfere. So what can glean from all this? Those who would have Gallifrey in the far future can use Frontios to justify their argument, with the TARDIS hitting a limit that corresponds with the start of Gallifrey's history, and thus out of bounds. Could, in fact, the fate of humanity be a deciding factor in Gallifrey's rise? If we survive, could one of our vaunted Empires create problems in Gallifrey's timeline? Are we, ourselves, Gallifreyans in the making? And what if the Doctor's name found itself in those histories before he was even born? But the fact that we're at the limit of Time Lord knowledge rather gives the other side of the argument more reason to rejoice. If Gallifrey is in the distant past (and face it, they fought ancient vampires and such so it's more likely already), then the Time Lords haven't cataloged anything this far out (though the TARDIS CAN cross that threshold, as we've seen in the new series, though under extraordinary circumstances). But then why the Doctor's anxiety? What law of time is he breaking? Some have suggested another time-sensitive power holding reign in the later part of the universe's life, but since we've never seen them, it's the most air tight of theories. More likely, it's illegal to screw with history when history is a complete unknown. You might not know what damage you're doing to the fabric of space-time. And if the Time Lords, in an ever expanding study of the universe find your tracks all over the restricted area, well, you'd be in some trouble.

VERSIONS: The deleted scenes on the DVD would give Orderly Cockerill a greater role, helping Norna and TnT get to the acid jar.

REWATCHABILITY: Medium - As set-ups go, it's not a bad one, if a little by-the-numbers. It asks plenty of questions for the remaining episodes to answer, most especially that whopper of a cliffhanger.
Doctor Who

Jeff R. said…
So, how far before Utopia does Frontios take place? Right around the corner and we just aren't seeing the heat-death related things because of budget and effects considerations, or are there up to billions of years to hold who knows how many iterations of human empires between them...
August 1, 2013 at 5:16 PM

Siskoid said…
There's no real way to tell, but I'd say we're trillions of years away from Utopia. Three reasons:

1. The Time Lord limit, to have any meaning, has to have a lot of history after it.

2. The Doctor says this is a tipping point, and that humanity's survival or lack thereof cannot be interfered with. Again, this means there's history aplenty after this.

3. Effects limits, in the past, have made the universe look MUCH MORE like it's undergoing heat death (no stars, for example), but in Frontios, they have these gorgeous space vistas with stars and glowing nebulae. So it's not a question of effects limits, as they've gone all out with the toolbox they had at the time. Since the only evidence we have is the program itself, we must accept that heat death is not upon us.

Lance Parkin's Ahistory, the best researched resource on this subject sets Frontios in 10 million A.D. on the basis of the Doctor's mention of Earth's destruction, so basically in the same time frame as the first two parts of The Ark, though Parkin admits there's a lot of room for debate given there is no explicit or implicit link made back to the earlier story.
August 1, 2013 at 5:33 PM