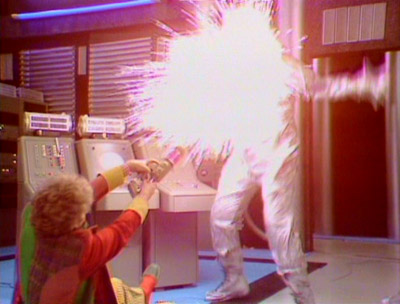 IN THIS ONE... Meet the Cryons! They're cold! And with the Doctor and Lytton they destroy the Cybermen on Telos.

REVIEW: Part 2 of Attack (already the finale!) went by much quicker than Part 1 did, but was it any more satisfying? If you're looking for sadistic violence, then I'm sure the answer is yes. There's the famous scene in which Lytton gets his hands crushed bloody by Cybermen. Flast boiling alive, and the climax is all about stabbing and shooting lots of Cybermen, even though they'll all die in the explosion engineered by suicide bomber Flast. And that's why it's gratuitous, see. Completely unnecessary. The same could be said of the whole ship theft subplot; we spend entirely too much time with characters who get unceremoniously mowed down by a Cyberman. What was the point? In all this carnage, the sixth Doctor seems extremely benign. Despite his forceful personality, he keeps getting pushed into doing things by the women around him. It's Flast who manipulates the Doctor into killing a Cyberman and donating his sonic lance. And at the end, it's Peri that makes him return to save Lytton, and Peri who makes him leave Lytton. I'm glad to see the Doctor show so much concern for an enemy, but the script goes way too far. The Doctor didn't "misjudge" Lytton very much. Even if he was true to his word to the Cryons (a mercenary's bond), he was still a pretty evil dude. How quickly we forget Resurrection of the Daleks!

We finally find out what the Cybermen's plan is, and it's to change history and prevent the destruction of Mondas, their original home, in the year 1986. So let's throw The Tenth Planet into the fanwank smoothy, and cue some guilty looks from the Doctor. Crashing Halley's Comet into the Earth a year before those events should do the trick, not elegantly, but efficiently. It's an interesting use of time travel, and the way it's revealed should justify this possibly happening pre-Earthshock (maybe), but the episode is kind of dodgy when it comes to temporal issues. The Cryons made contact with Lytton when they picked up his distress beam on Earth, except Earth isn't in the same time zone as Telos. The Doctor assumes he's the Time Lord agent meant to stop the Cyberman incursion, but that's like something out of the third or fourth Doctor eras, rather out of the blue here. On a smaller scale, Peri apparently takes the time to change into a red jumpsuit while under guard by the Cybermen.

The Cryons, revealed as the former masters of Telos, and sporting a species name right out of the Terry Nation playbook (because they're cryonics experts of a cold disposition), are interesting creatures. All played by women (including, in what could be the strangest bit of celebrity casting ever, Sigmund Freud's great-granddaughter Esther), they have high voices, frosty beards and expressive hand gestures. I don't think we've seen such alien-behaving aliens since The Web Planet. They're really tactile, wanting to touch all the warm-bloods they come into contact with, and really rather cold-blooded figuratively as much as literally. Between them, Lytton and whoever else is trying to capture/destroy the time ship that makes the Cyberman plan possible, it's amazing that the Doctor and Peri get to do anything. Oh, and the TARDIS chameleon circuit? There's a reference to it looking like an organ, but when it materializes on Telos, it's a police box again and the Doctor doesn't say anything. Just a one-off stunt/joke then.

VERSIONS: The Target novelization doesn't make any important changes to the broadcast program, aside from slight restructuring to put all the Telos material in the second half of the book. It does give Lytton's race a name, the Charnels.

STORY REWATCHABILITY: Medium - Attack of the Cybermen gets mired in continuity that would have been pretty opaque to the viewer of its day, and isn't all that satisfying for Whovians who have deep knowledge of the stories referred to. For something that means to be a tribute to the Cyber-stories of old, it's distressingly violent in its treatment and makes you long for those less intense (and yet often more effective) days.
Doctor Who

CiB said…
Firstly, one of Lyttons minions, the undercover policeman Russel? He was played by Terry Molloy- the only time that actor was in Doctor Who not playing Davros.

As for the Doctor misjudging Lytton- how could he? In Resurrection of the Daleks they didn't actually meet!
August 22, 2013 at 6:29 AM

Siskoid said…
Sawaaaaaaaaaaaaaaaaaaard! See, I didn't notice because we're used to thinking that if a character appeared in a story substantially, he'll have shared a scene with the Doctor. But Saward never had his real "hero" meet the show's, and yet they still act like they've met, because his other flaw as a writer is to give the characters the information they need, not have them learn it naturally.

Good catch on Molloy, I should have mentioned it! Easy to forget since they're no resemblance!
August 22, 2013 at 7:57 AM

John Nor said…
I'm not sure if this or Arc of Infinity is the Doctor Who story which has the most pointless continuity.
August 22, 2013 at 6:59 PM