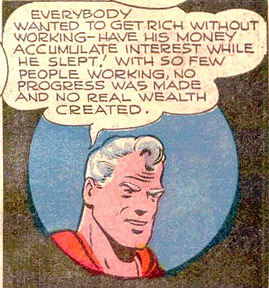 Along with the "crying Superman", "Superman as an old man" is one of those recurring tropes in Superman comics. But is it a hoax this time? Welcome to a Reign/Who's This team-up, where I conflate two of my blog series into one crazy Golden Age recap...

Who's J. Wilbur Wolfingham?
Who's This? The W.C. Fields-looking mo-fo on page 11 of Who's Who vol.XII, a character deemed controversial by fans for his inclusion. Oh fans, you're mean. 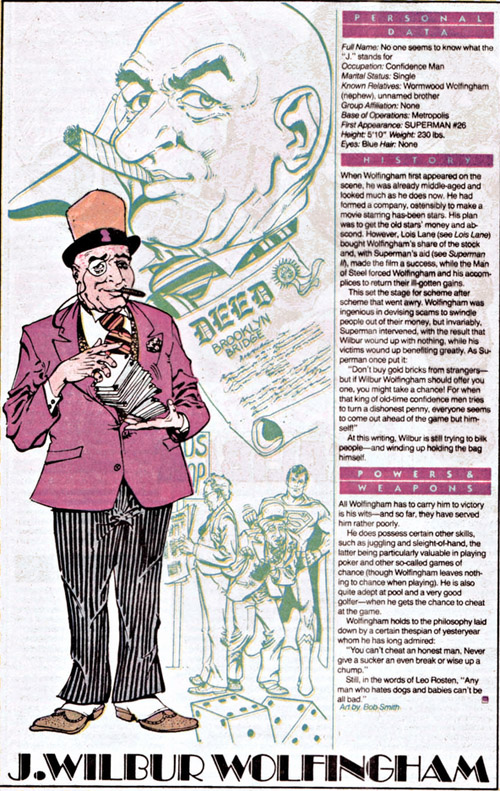 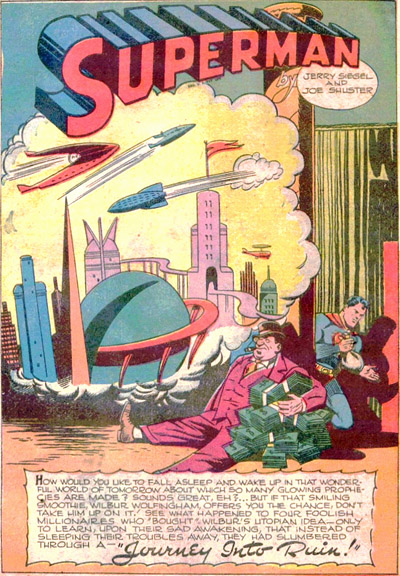 By this point, Superman has tangled with J. Wilbur a number of times, and he catches up to him again under strange circumstances: 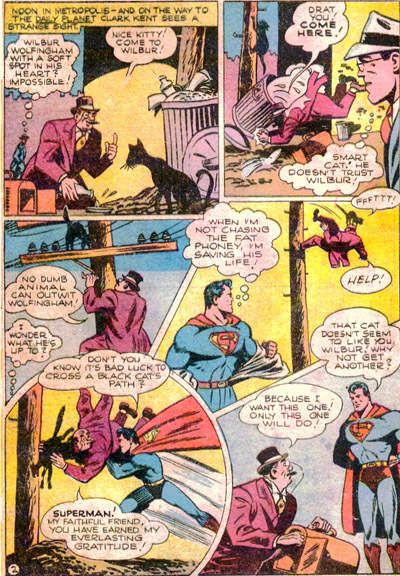 So what's so important about this cat? Superman follows him to a mansion and spies on him with his x-ray vision. J. Wilbur puts the cat inside a machine and gloats about the million dollars the mangy beast will get him. Soon, four millionaires walk into the house with a dead cat under glass. It's a long con, really, because they think J. Wilbur put the cat to sleep five years ago and now he will revive the it before their very eyes! 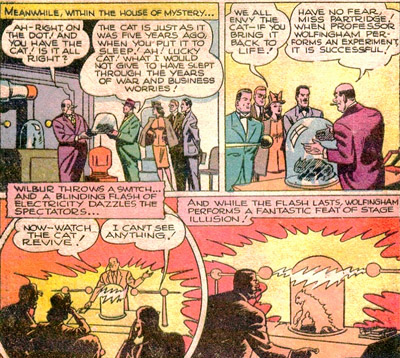 Obviously, he's switched cats, which means there's a dead cat under the table for the rest of the comic. But these millionaires aren't very smart because they immediately (and I do mean IMMEDIATELY) agree to give J. Wilbur 250,000$ each to be put to sleep and revived in 25 years' time at which point they'll have accumulated loads of interest, all based on this little demonstration by "Professor" Wolfingham. It's nice to be so rich you can just throw 25 years away like that. Next stop, futuristic 1972! Superman decides to teach them, J. Wilbur most of all, a hard lesson. He puts J. Wilbur to sleep with the same gas, preventing his timely escape with the cash, and flies the house to the beach. 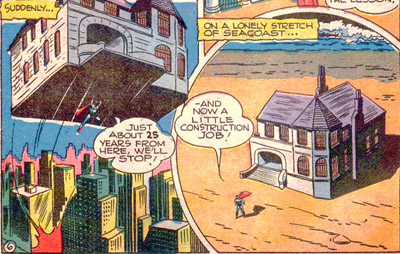 With only 24 hours to go before they wake up, he builds a few city blocks, paints a huge and photo-realistic backdrop, hires and rehearses actors, adds finishing touches like cobwebs on the sleepers, and puts on aging make-up. If you thought great feats of super-dickery only happened in the Silver Age, THINK AGAIN!

J. Wilbur should have realized something was off when he saw Superman this old only 25 years after no more than his 30th birthday, and using a cane no less! I suppose Kryptonians might not age as gracefully as we do. What's more interesting is Superman's interpretation of 1972 as a shabby economic crashland, which is much closer to reality than J. Wilbur's dreams of the World Fair in the splash page.

Of course, the reason is a bit dubious. When it was discovered you could sleep through the 50s and 60s, everybody started doing it and lovely wonderful capitalism collapsed. People stopped making things. Money became devalued. The millionaires find out their bank accounts didn't grow in their absence, and to make matters worse, they can't even go to a restaurant and get a meal because we're all eating vitamin capsules instead now (nobody wanted to farm, see). Sounds like a quick cover for not having hired a catering staff for his faux-Metropolis, but these saps will clearly believe anything. Playing on their regret, Superman destroys the city and turns back the clock 25 years to offer them a second chance.

They certainly made an about-face! Superman's super-hoaxery has saved their souls! J. Wilbur tries to slink away with the cash claiming he's a changed man, but Supes is quick to call him out. Later...

No pity from Clark Kent and his giant newspaper. Not for J. Wilbur, not for Lois. What about you? Any sympathy for J. Wilbur Wolfingham and his place in Who's Who? Seems to me a grifter is a good foil for Superman, a mental challenge rather than a physical one, and lighter, more comical than the usual evil scientists he usually has to defeat.

Who else? Well, that lacked martial arts, Who's Who vol.XII's bread and butter. So back to martial arts in our next edition.
Golden Age Reign Superman Who's This?

American Hawkman said…
I've always liked J. Wilbur Wolfingham... an unrepentant con artist is a fairly clever idea for a Superman foe simply because he's NOT someone beating up does the slightest bit of good to do. Add in his awesome W.C. Fields act, and he's memorable enough to reuse repeatedly.
August 31, 2013 at 1:38 PM

Unknown said…
This is sort of a favorite Who's Who entry of mine, as it's pretty humorous. Tons of villains are real screw-ups, but Wolfingham was such a bumbler even his encyclopedia entry talks about how stupid and incompetent he is.
August 31, 2013 at 5:23 PM

American Hawkman said…
Yeah... it's one of my favorites as well. Same kind of tongue-in-cheek laughter that the Son of Vulcan gets in his. It certainly made me want to do more reading on the character.
August 31, 2013 at 5:53 PM

Brad said…
You could mention that, as J. Wilbur is clearly based on Claude William Dunkenfield, so is E. Wilbur a near ringer for -- Bill Murray.
September 2, 2013 at 11:41 PM

Siskoid said…
First, that's a lot of support for this character. On his behalf, I thank you.

Andersonh1 said…
Thanks to the Golden Age Superman omnibi, I've read a number of stories featuring J. Wlibur Wolfingham. Without a doubt he falls into the legitimate "recurring villain" category. His schemes often work until Superman puts a stop to them, so he's hardly a bumbling villain, just one who is badly outclassed by Superman.
March 9, 2018 at 4:23 PM

H. S. Anderson said…
And this very story has been reprinted in the Golden Age Superman omnibus vol. 6. Nice to read it in its entirety.
September 5, 2020 at 11:21 PM