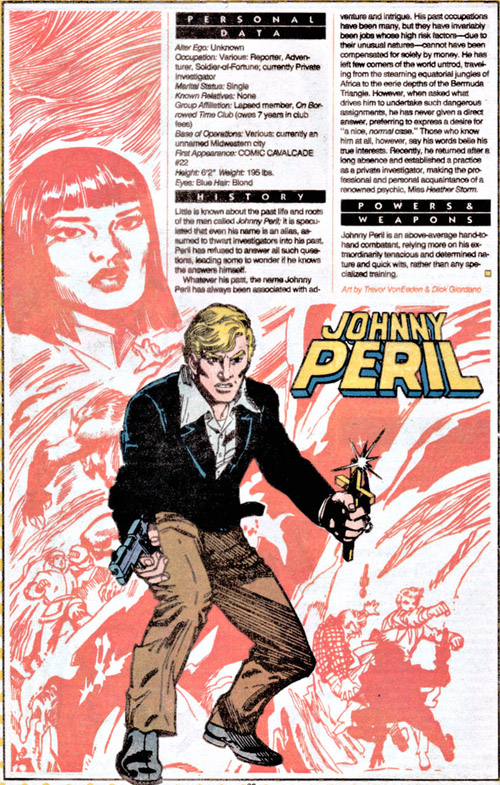 The facts: First appearing in Comic Cavalcade #19 (1947) - the Who's Who entry is apparently in error on that point - Johnny Peril found his way into various Golden Age books, including All-Star Comics, Danger Trail, and Sensation Comics/Sensation Mystery (#107-116 in 1952-53), the first strip of which, drawn by Alex Toth, was reprinted in The Greatest 1950s Stories Ever Told. After Tales of the Unexpected became, simply, The Unexpected, it started publishing its own recurring feature, "Adventurer of the Weird" Johnny Peril, who had his longest run in that series from #106-117 (1968-1970), then 200 (1980) and 205-213 (80-81).
How you could have heard of him: Though he's made a forgettable appearance here and there since Who's Who - in Eclipso, for example, and Starman - he should be most easily remembered from a recent storyline in Justice League Dark, where he appeared with brown hair so we could tell him apart from John Constantine.
Example story: Sensation Comics #107 (1952) 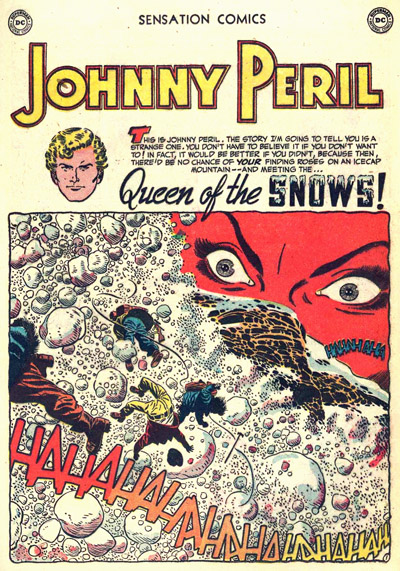 From what I can gather, Johnny Peril has been used as a catch-all adventurer who has been plugged into supernatural stories, science-fiction, ghost-breaker tales, and crime mysteries. If the protagonist is blond and survives the story, just slap JOHNNY PERIL on it and go. "Queen of the Snows" definitely falls on the supernatural end of the scale. With Alex Toth drawing, we're guaranteed something that looks nice. Bob Kanigher is on story and Sy Barry on inks. And Johnny himself narrates, and not surprisingly, he's doing something perilous - climbing (fictional) mountain Subara in the Himalayas. He's apparently there to find a man lost up there, and comes across this Lee Allen looking... unhinged. 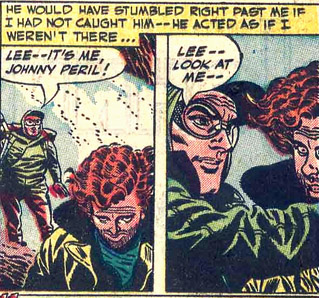 He brings him back to the camp, but his mind is gone. All he can talk about is Subara, the beautiful goddess of the mountain, and her crown of roses. By the time they reach safety, Lee has died from exposure, but the sherpas are convinced it's the work of the ice queen. Johnny doesn't believe a word of it and enjoys a smoke in his tent. Their superstition is rewarded the next morning when an avalanche swallows Lee's body and the men carrying him.

Johnny had vowed to bring the body back to the Allen family, but now, all he had to do was climb the mountain himself to prove the sherpas wrong. Before he can do a bit of ghost-busting, his senses are assaulted by strange lights and sounds. 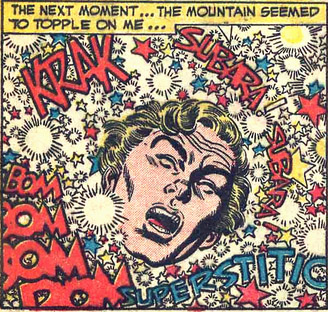 He wakes up tied to a sled, and the sherpas bring him back to the coast for his own sake. He wires the family and recuperates, meeting a couple of friends, pilots on vacation, with whom he shares the story. In disbelief, they take off for the summit before Johnny wakes up the next morning. Johnny heads after them. Clearly, this was a very bad idea. 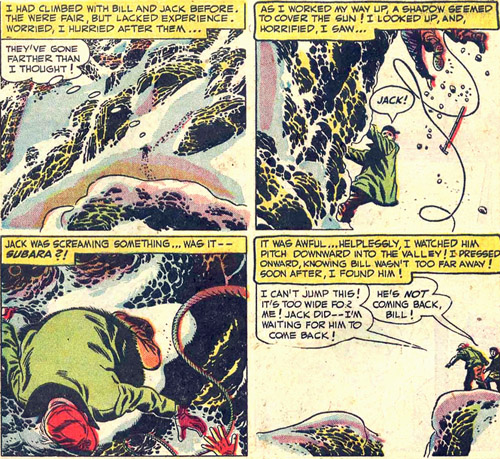 Johnny goes on ahead and on the next ledge sees a ghostly woman with a crown of roses! Though he wants to make sure she's lured her last victim off a cliff, he himself falls under her spell. Killer Frost moment: 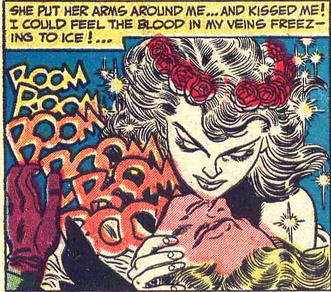 Just as she's about to push him into a crevasse, he comes to his senses and grabs hold of her arm. She loses her footing even as he restores his, and she falls, silently into the mists below. Coming back down the mountain, Johnny rejoins his surviving friend Bill... with proof. 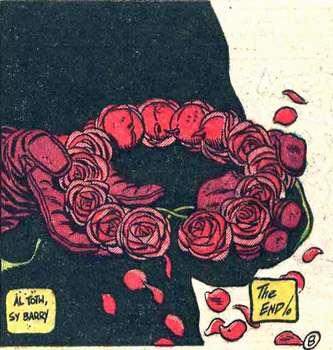 GHOST NOT BROKEN! A simple ghost tale, but enhanced considerably by elegant art. I don't know if Johnny Peril loses friends frequently, but I make that two in less than 8 pages. He's a Peril to the people around him!

Who else? We're off to volume XII next! There's a good chance we'll see a martial artist in that batch!
Comics Golden Age Who's This?

American Hawkman said…
His Eclipso appearance had him as a full-on daredevil celebrity, which makes me feel he's about as much a natural "Johnny Peril" as Super Dave Osborn' s real name is Super Dave. Of course, this is the DCU, where Tim Trench is really Tim Trench, so...
August 14, 2013 at 7:21 PM

Siskoid said…
Those kinds of names make sense in a universe like the DCU because it has so many larger than life heroes.

See, when names were being assigned in the olden days, the heroic types got crazy last names like Peril, Double, Trench and Thunder (oh the untold stories of yore!) and when they bred, the infused history with such names. On our Earth, the people women wanted to breed with were tradesmen, so we have a lot of Smiths and Taylors.
August 14, 2013 at 8:05 PM