Who Are Little Boy Blue and the Blue Boys? 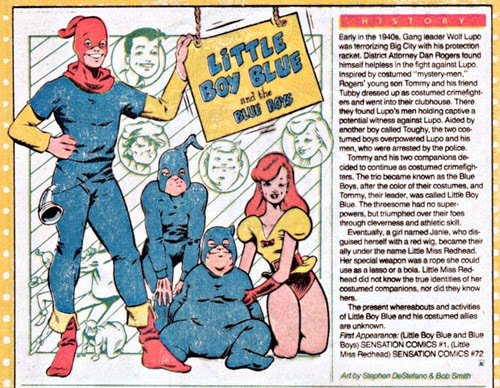 The facts: Little Boy Blue and the Blue Boys, creations of Bill Finger and Jon L. Blummer, premiered in Sensation Comics #1 (1942) where they were a regular feature until #82 (1948) with an appearance in the Big All-American Comic Book #1. Little Miss Redhead would accompany them on most adventures starting with Sensation #72. Some stories have been reprinted over the years, usually the first appearance, and Roy Thomas made use of them in crowd scenes in All-Star Squadron and Young All-Stars.
How you could have heard of them: Not to be confused with the Fables character, the Golden Age Little Boy Blue had a son who was featured in a "Bonus Book" inserted into Flash #12 (1987) leading a second generation of Blue Boys, which somehow led to them getting an entry in a Who's Who Update (and then nothing). An apparently unrelated character with that name showed up briefly in Morrison's Seven Soldiers of Victory #0.
Example story: Sensation Comics #77 (May 1948) by Frank Harry (writer unknown) 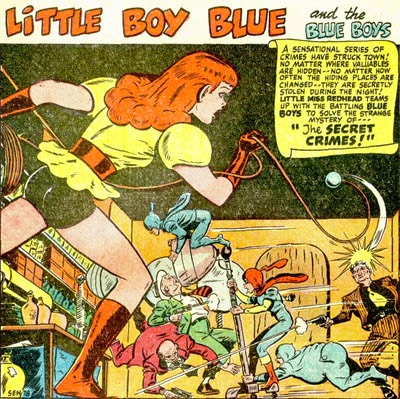 A late tale of the Blue Boys so I could include Little Miss Redhead, she actually stars pretty prominently. You could almost say that the fact Sensation is a Wonder Woman vehicle gives the other strips a motive to go a little girlier than most superhero comics. Not that there's anything wrong with that, especially since Redhead is actually a more interesting character than Boy Blue and his gang. For one thing, she's a really good detective, and seems to know who the Blue Boys are, but they don't know her secret identity. She's followed the trail of some jewel thieves to a beauty salon, and knows how to use a skipping rope as a lasso!

So she's trolling the Blue Boys who think she's just this annoying girl Janie (yuck, cooties!), never stopping to wonder why she's on a rooftop tying them up from above. Well, girls really shouldn't try to be superheroes, not by themselves, and she's captured minutes after she puts on her costume. It's still Little Boy Blue's strip, so he needs to rescue her and all that. If she kept a blade in her utility belt, she could get out of those bonds. Instead, she's got a whistle that can call the Boys. Typical. 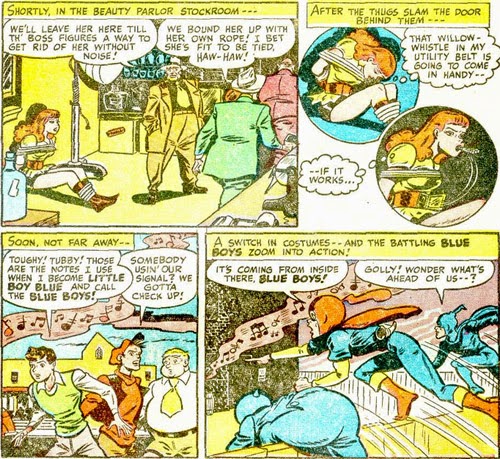 The gang fights the robbers, using their environment (always the best fights, and I should know, I've certainly seen enough Jackie Chan films to be an expert on the subject) and... 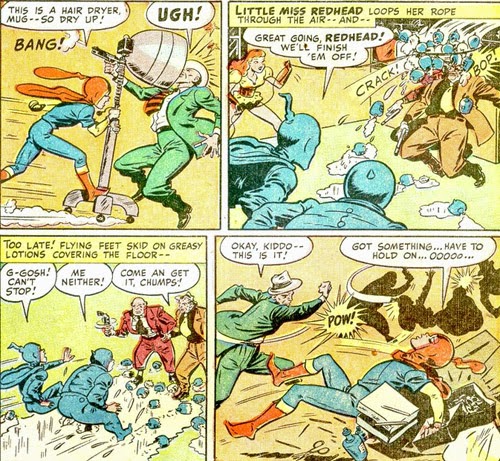 ...oh no! The GIRL screwed everything up with her hand lotion trick! The bad guys put the kids in bags and throw them in the river! They don't notice, however, that a nail file fell into Boy Blue's bag, which allows him to cut through the burlap, escape and free his friends. Redhead redeems herself thanks to bugging equipment in her lasso/skip rope/bola, leading them all to the scene of the next robbery - a TV studio where the entertainers are wearing their sponsor's jewels. Big reveal: 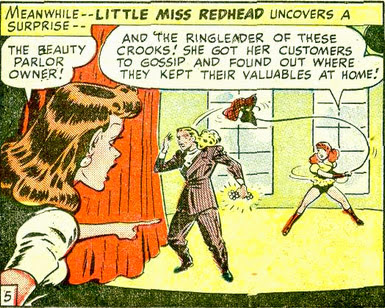 The beauty parlor owner is the big boss, in male drag. She used parlor gossip to figure out where the ladies kept their bling and so on. And it would have worked too if not for those meddling kids! The cops soon arrive, because they were all watching that show. Ah, the joys of live television! So Boy Blue, do you still think girls are useless and yucky? 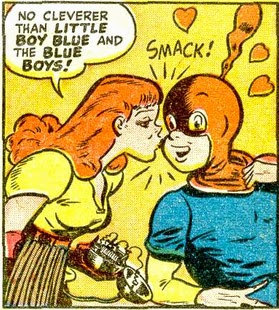 Thought not. Though the next day, the Blue Boys are still mocking Janie, so... It's a long hard road for female heroes to get the respect they deserve, even in a Wonder Woman book.

Who else? I thought about the League of Super-Assassins, but knew all the members through their membership in various Legions. Not sure who else I'd like to cover in vol.XIII. Suggestions?
Comics Golden Age Who's This?

Siskoid said…
Satanis turned into Satanus and turned up as Blaze's brother, but Lord Shilling could be interesting.
September 25, 2013 at 8:59 PM

Worth pointing out, I suppose, that the "modern" Little Boy Blue and company were the ones that set Doctor Light off on his loathing of Teen heroes specifically, and the defeat that made him a joke for over a decade.
September 25, 2013 at 9:18 PM