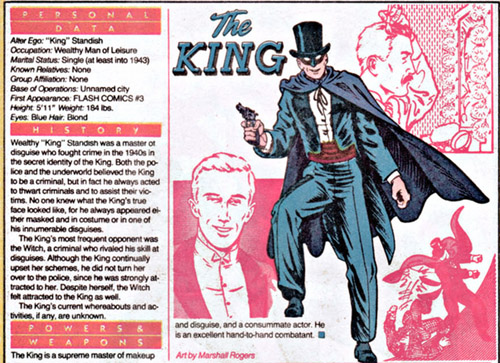 The facts: The King, or as he was originally billed, "King Standish", was a master of disguise created by Gardner Fox for Flash Comics #3 (1940). The strip was a regular feature of that book until #41 (1943), with occasional appearances in All-Flash, Comic Cavalcade and World's Finest throughout this period.
How you could have heard of him: The King worked with the JSA in Star-Spangled Comics special that was part of their return in 1999, and not surprisingly, in the nostalgia-heavy Starman (#66). His son, King Chimera, was a similar character who appeared in the last Justice Society of America series (in #29).
Example story: Flash Comics #25 (1942) by Gardner Fox and Harry Lampert 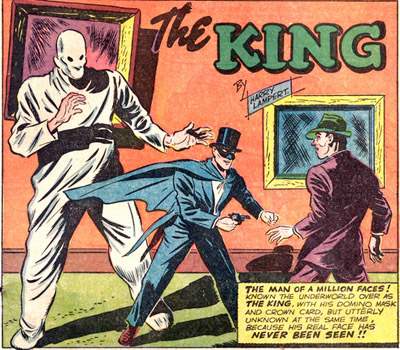 From what I can gather, King Standish's early adventures were pretty costume-less. As the superhero genre rose, he started appearing more and more with a domino mask and trademark magician's costume. Flash Comics #25 falls around the tipping point, where he's sometimes in costume, and sometimes in disguise. And I'm happy to report it's kind of a hoot. So the story starts at the home of the wealthy Quentin Quarles who's asking two of his men to scare his listless drunkard of a son straight with the help of a famous haunted house he just bought. It's a hardcore intervention!

Posing as kidnappers to get him out of the "Tipsy Tavern" makes sense, they just didn't count on the King being parked out front.

A hero's got to eat, but I suppose that can wait while he sorts out this kidnapping business. In another coincidence, the King's nemesis and paramour, the Witch, is converging on the same haunted house from the other direction. I think she's in almost every King story, his only recurring supporting cast member, so she HAS to show up so she can get paid for that month. It seems she had three of her men rob a bank and hole out in the house. They're as spooked as Junior is when the ghost of Hamlet's father shows up. 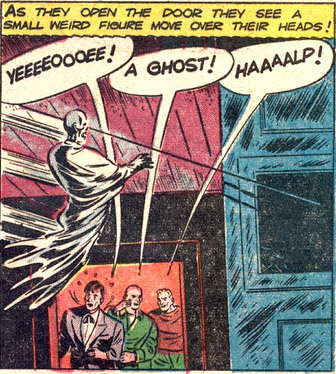 The King sneaks in and confronts the bank robbers, thinking them part of the kidnapping team, and spooks them a little more with the ghost-faking tricks he found in the house. The Witch also arrives to pick up the 50,000$ stolen from the bank, but the King's already gotten his hands on it. He's thinking kidnappers and bank robbers at the same hideout is a little strange, and then he sees his archenemy/love of his life too! 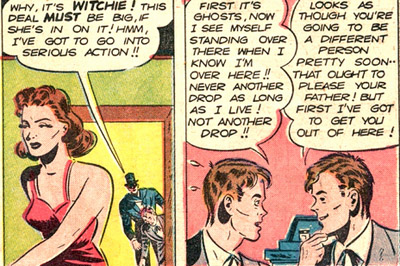 Move over, Christopher Chance, the King was a master of disguise long before you were! And quick too. In the space of a panel, he's disguised himself as Junior, right down to the suit. How? Comics! In the meantime, the fake kidnappers have discovered there are real gangsters in the house and want to leave, confessing Quarles Sr.'s plan to the King-as-Junior. At the same time, the Witch admonishes her men for believing in ghosts and brings them to the main room to ransom the conveniently kidnapped Quarles. But this Quarles is a lot more manly than has been reported in the gossip columns! 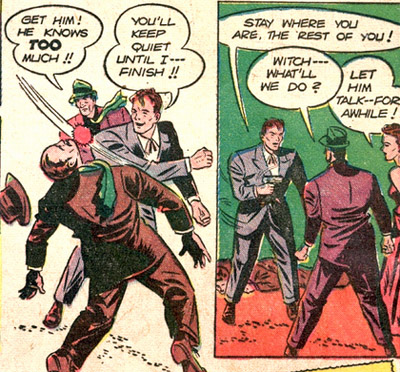 Of course, he's not really Quarles, is he? And the Witch knows her King enough to notice.

That's when Quarles Sr. decides to cross the threshold, to find his son (not his son) holding a gun on the very thugs who robbed his bank earlier that night! That'll teach him to undervalue his progeny (not actually his progeny).

If Quarles was going to close the bank after losing only 50,000$ - and I know a buck could stretch farther back in the 40s; $675,675.68 in 2013 money according to an inflation calculator - I'd rather think it's because he spent all his cash on stuff like haunted houses and spooky interventions. It's so easy to go from riches to rags, isn't it? In any case, the King just solved a crime AND fixed a father-son relationship, time to change back into his Masked Zatara costume.

Aw, isn't it sweet? Like he says, all wrapped up except for his steak dinner. Does anyone know if he got to a restaurant in the next issue?

Who else? With two Killer Sharks to choose from, I decided to wait for a rainy day (or next year's shark week), so we're moving on from the Golden Age. Next stop, Ice Age!
Comics Golden Age Who's This?

American Hawkman said…
Another character I genuinely love... I heard that Johns actually had plans for the King, but never got to fully use them. It's a shame, because he deserved to be remembered more.
September 6, 2013 at 4:16 PM

CalvinPitt said…
At first I wanted to say it was strange the With drops her guard when she realizes she's facing her arch-foe, as opposed to some drunk dilettante. Then I got to the end, and the King let her go, and it made more sense.

When she thought she was facing the lush, she didn't know what he might do. Maybe even shoot her. But her old buddy the King, well he'll let escape, nothing to be worried about. She doesn't even need that gun.
September 6, 2013 at 8:02 PM