Who's Kong the Untamed? 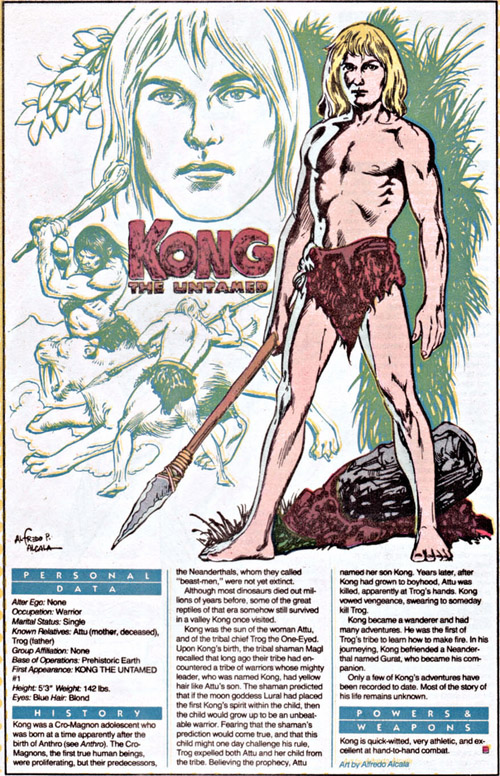 The facts: Created in 1975 by writer Jack Oleck and artist Alfredo Alcala, Kong the Untamed seemed part of DC's attempt to tap into the caveman/jungle genre that was fairly popular in the mid-70s (in children's programming, certainly). Like their 60s attempt (Anthro), Kong's series didn't last long, ending with its fifth issue.
How you could have heard of him: Who's Who and healthy curiosity, maybe? I don't think Kong appeared anywhere else, except maybe for a cameo in History of the DCU at around the same time.
Example story: Kong the Untamed #2 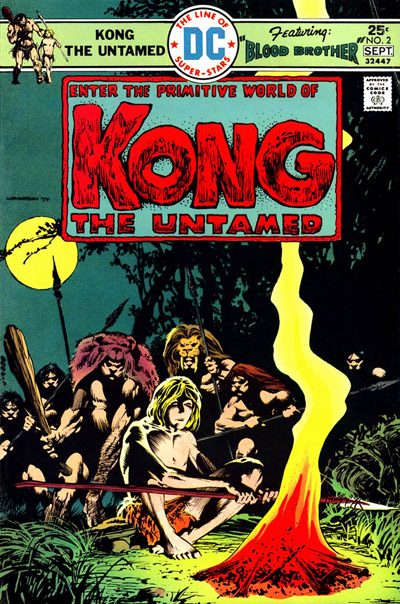 With issue #3, Mike Ploog stops doing the covers, Gerry Conway starts scripting (and then writing) and, coincidence or not, dinosaurs start showing up. So I've chosen to look at Kong BEFORE it sells out its scientific accuracy. In "Blood Brother", the young Cro-Magnon is still on the run from his own tribe after its chief tried to kill him, threatened by his name being that of a great warrior from the past. Cro-Magnons are like that, yo. Alone and untamed, Kong's life is a daily struggle against nature. And nature's minions. Like wolves. 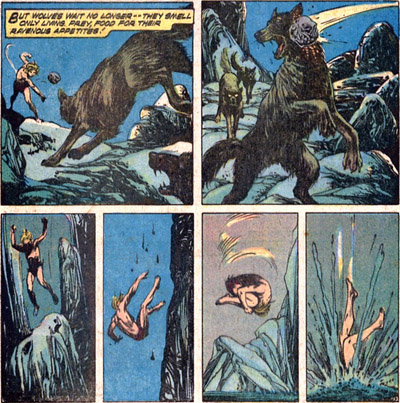 No Mowgli here. Kong is hardcore. And so is Alfredo Alcala whose work I love. I had a hard time choosing which panels to leave on the cutting room floor.

When Kong walks out of the river, he's freezing. It IS the ice age, after all. Having seen sparks come off the stones he missed the wolves with, Kong becomes the first human being to make fire by rubbing the same kind of stones on dry weeds. But this draws the attention of the Neanderthals he recently fought (in issue 1). They tie him up in a cave to be devoured by the god, a black bear. Before the bear can get there, a bear of a MAN shows up - Gurat the Neanderthal Kong speared in #1. Pfft, a mere scratch! 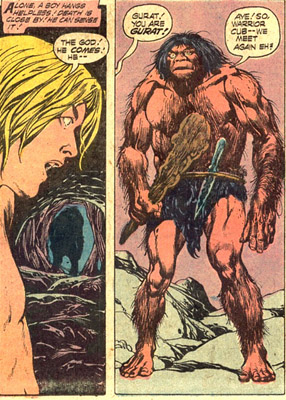 In a twist, Gurat frees Kong from his bonds, because anyone who would dare attack him deserves to die a warrior, not a sacrifice. And Kong is definitely that kind of badass, the kind of badass who would punch a prehistoric bear when he could easily have escaped and left the bigger man to it. 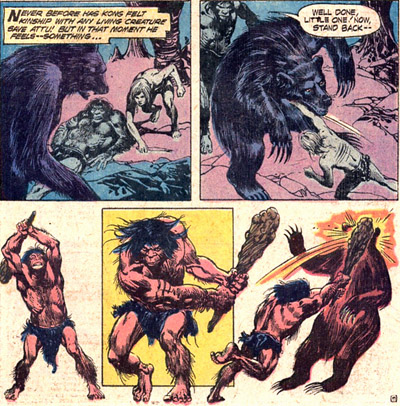 They escape together, but find themselves caught between antagonistic members of each of their species. With Neanderthals in pursuit, Kong uses his new-found fire-making skills to route them. 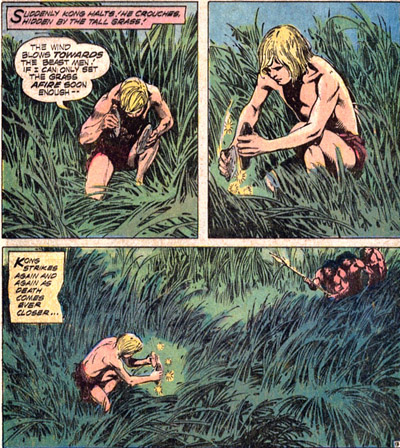 They run off, fearing evil spirits. The Cro-Magnon deer people are no less intimidated, so they'll leave Kong along and just kill Gurat. Oh no you don't, says Kong, threatening them with striking stones. And so Gurat is released and the two of then, hirsute beast-man and yellow-haired boy, become best of friends. More! Blood brothers, as their blood mingled on the claws of a black bear.

That caption is a little disturbing to modern eyes, but I mean, it's no worse than Batman and Robin. Get your minds out of that filthy gutter. Kong and Gurat would have three more issues' worth of adventures together (or sometimes, apart) facing dinosaurs, pterodactyl-riding Native Americans, and indigestion. Yeah, I think I chose the right issue to showcase.

Who else? What, no Knights of the Galaxy? Wanna make something of it?! I also could have presented one or both of the Killer Sharks. Well, I'll get them on a second go-around, but right now I'm eager to see who's in Who's Who volume 13!
Comics Who's This?

American Hawkman said…
I double-checked... Kong has ONLY appeared in his own series. Yet he was in the Mayfair DCRPG. Kind of cool.
September 12, 2013 at 5:55 PM