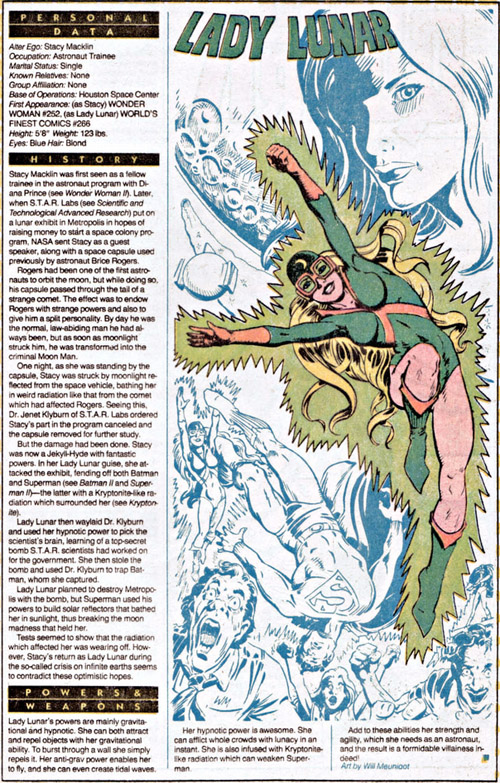 The facts: Lady Lunar started life as a very member of Wonder Woman's supporting cast, Diana Prince's fellow astronaut trainee Stacy Macklin in Wonder Woman #252-254 (1979). At the end of that year, Macklin also briefly appeared in Superman #339, test-piloting a rocket sled. That put her in Superman's world, paving the way for her ONE true appearance as Lady Lunar, in World's Finest Comics #266 (1981).
How you could have heard of her: Slim chance. Crisis fans who blinked might have missed her fighting Negative Woman in a single silent panel from Crisis on Infinite Earths #9.
Example story: World's Finest Comics #266 by Cary Burket, Rich Buckler and Bob Smith; edited by Wonder Woman writer and Stacy creator Jack C. Harris 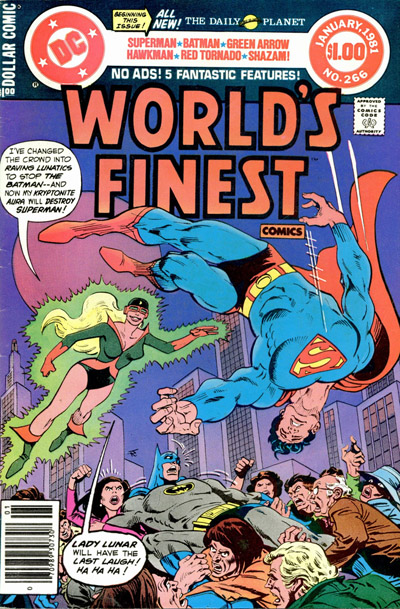 DC was obviously trying to do something with Stacy Macklin, make her the female Hal Jordan or something, a woman test pilot and astronaut doing dangerous stuff for NASA and STAR Labs. Unfortunately, they had trouble keeping her hair color consistent. A red head when she first appeared, she was blond by her third issue, and back to red in Superman. While Lady Lunar appears to be blond, Stacy, at this point, is a brunette! No wonder readers found her less than memorable. In World's Finest 266, Lady Lunar attacks a STAR Labs exhibit meant to attract interest in off-world colonization. Clark Kent's there reporting, and Bruce Wayne is there investing. Lady Lunar's there... uhm.. stealing a papier maché moon.

If Superman's proving he's no Indiana Jones, it's because Lady Lunar is radiating kryptonite. She gets away, but that's a clue to who she might be. See, way back in 1958, in World's Finest #98, Superman and Batman fought a guy called Moon Man who had the same powers. Also, the same basic costume.

On a trip around the moon (do Borman, Lovell and Anders know they were beaten to the achievement by a decade?!), astronaut Brice Rogers flew into the comet's tail, giving him moon-ish powers and a split personality. When the moon came out, he became a supervillain. By day, he had no memory of his actions. Anyway, he was defeated and he got better. He's got no idea who this female version of him might be! The next night, Lady Lunar shows up again, causing tidal waves, giving people "moon madness", and stealing an experimental bomb STAR Labs and the military were working on. Again, Superman can't do a damn thing, and when Batman tracks down Rogers' spacecraft, it's radiating the same energies Lady Lunar is. Apparently, moving it from Houston to Metropolis reactivated its radiation dose because SCIENCE! The World's Finest at first suspect... Dr. Jenet Klyburn! 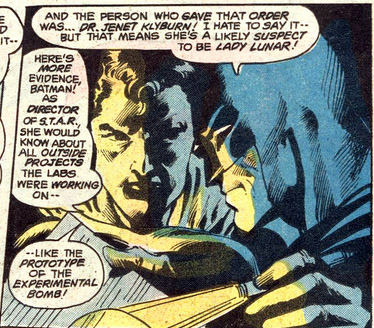 We know it's not her, of course. Who's Who spoiled us 4/22 years after the fact. But trying to find Jenet leads them to Lunar anyway. The STAR Labs mainstay is being held captive by the Looney villainess, whom she recognizes as astronaut trainee Stacy Macklin of Wonder Woman "fame". She got a dose of radiation from the rocket exhibit and got herself Moon Manned.

Now it's night and she's out and about, setting a bomb meant to destroy Metropolis, this "city of parasites". Go Team Moon! With time a factor and moon madness causing a riot, Superman uses SCIENCE! to put sunlight in play and cure everyone's moon madness.

Yes, I KNOW moonlight is actually reflected sunlight just like the one bouncing off his solar reflectors, but you can't argue with SCIENCE! Because all the capital letters, look! Metropolis' night owls are freed from Lady Lunar's thrall, and it's up to Batman to push her into a stray beam of sunlight to awaken her inner Stacy. 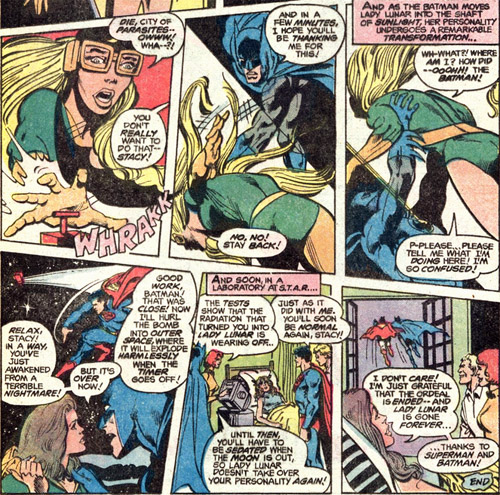 And that's really the first we see of Stacy Macklin in the issue who, despite four previous appearances probably appeared in less than 6 pages total. You can add 3 panels to her total. Stacy never appeared again, though Lady Lunar did, in Crisis, despite being cured of her condition by story's end. I guess she got pulled into events from these two or three days.

And to think neither Etta Candy nor Steve Trevor scored a Who's Who entry...

Who else? Half-pagers tend towards obscurity, but I remember both Kulaak and Kung from All-Star Squadron, so I skipped ahead. They would definitely feature in a second wave of articles though. Up next, true blue Golden Age material.
Batman Comics Superman Who's This?

American Hawkman said…
Plans have been in the works on three separate occasions to revive her in Wonder Woman, but changing writer syndrome has killed them all. She may be cursed. :) She did manage to sneak in an appearance at Roulette' s casino once.

Siskoid said…
Seems born for it! Where the Lunar Corps, dammit?!

Didn't know there were plans for her, when and by whom? Where's the treasure trove of Stacy Macklin gossip I didn't find?
September 19, 2013 at 5:00 PM

Here's what I have been told. Apparently she was up for revival in Wonder Woman #66 in 1992, but the real-world collapse of the Soviet Union caused the writer to leave her role in the arc to be divided between two new characters, a Soviet cosmonaut named Natasha Terranova and a Daxamite named Julia.

Another proposal to revive her fell totally flat in the Wonder Woman series itself, but part of it saw publication in Legends of the DC Universe 80 Page Giant #2, but her role was excised for space, leaving her with a single one-line reference ... the Cheetah had bought a (faked) satellite image of Paradise Island from her.

Lastly, I had heard she was supposed to be part of a mass villain battle, either Circe' s all-female army a few years ago, or her gathering of old Wonder Woman foes after Infinite Crisis, but got overlooked by the artist.
September 20, 2013 at 5:33 PM

Siskoid said…
What amazes me most is that anyone anywhere is talking about Stacy Macklin at all.
September 21, 2013 at 9:13 AM

You'd honestly be surprised at how often I end up having conversations about her on various mailing lists with people who wonder if she's still around. She's actually pretty fondly remembered for such a minor villainess.
September 21, 2013 at 2:07 PM