Doctor Who Reviews: Beyond Cancelation 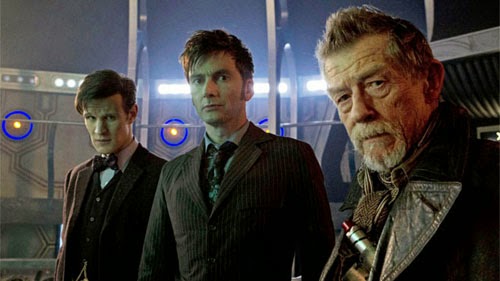 We're in the final stretch now, less than a week before I've reviewed every single episode of the original Doctor Who series. So what happens next? Well, I do plan on going through all the new series episodes as well, though things get a little complicated at this point, so I thought I'd better reposition the feature now in case I cause more CONTROVERSY (as only Whovians would think of it).

First off, I WILL be doing a few posts on the Wilderness Years, but though a small number of readers would be interested in the novels and audios that were spawned between 1990 and 2005, there's just no way I'll have the time, nor are they as accessible or widely consumed as actual broadcast episode. So it's going to be just four stories: Dimensions in Time, the TV Movie, The Curse of Fatal Death, and Scream of the Shalka. Three of these aren't in continuity (well, Dimensions in Time might be, but let's hope not), and even the TVM's relationship to continuity has frequently been in doubt, at least until McGann's likeness appeared in John Smith's Journal of Impossible Things (Human Nature) and other flashbacks. Regardless, the first three were broadcast, and the last put up as a possible Doctor Who continuation on the BBC's website. The Cushing movies weren't canon either and I covered them, so I'm only being consistent. If Scream of the Shalka, why not other official BBC webcasts like Death Comes to Time, Real Time and the 8th Doctor version of Shada? Well, these were far less "animated" than Shalka, and put up as untold tales of the 7th and 6th Doctor, which puts them in the same pile as novels and audios. Shada would have had a shot, since McGann was the "current" Doctor, but I covered it under Shada's Versions.

I had to make some decisions regarding New Who too, especially since the DVDs have included all manner of linking scenes, Children in Need specials, and live performances (but not, for some reason, webisodes or the interactive Attack of the Graske). So what do I consider an episode? Basically, if the segment had its own opening credits sequence and/or announced title, no matter its length, it's an episode, though if the Doctor is appearing on another, non-Who show, it wouldn't count (which is why the Jim'll Fix It, Search Out Science, Blue Peter, and Tonight's the Night 's in-character appearances weren't covered). So that means you can expect the Graske, Time Crash, Space and Time (probably together), Pond Life (again as a whole), the animated stories The Infinite Quest and Dreamland, and even Music of the Spheres. Webisodes and bonus scenes (including the one preceding The Christmas Invasion) will be discussed under what episode is most appropriate under a new category called ADDITIONAL MATERIAL. I hope you'll agree that the difference between the former and the latter is that some are complete stories while the rest are simply moments that fit into a larger story.

But wait, there's another issue and that's the spin-off shows. Well, again, let's be consistent. I covered K9 and Company, so I must therefore cover Torchwood and The Sarah Jane Adventures (and do so happily). After all, Doctor Who isn't quite complete without these elements, as many characters weave in and out of them. I won't interrupt any given season for them, but after a Doctor Who season, you might have a Torchwood and/or SJA season before Who picks up again, mostly following the broadcast chronology. I'm keeping the Australian K-9 series for the end, since it doesn't connect to anything BBC Wales is doing, yet features a Doctor Who character. Hey, I might do P.R.O.B.E. too, if I can get my hands on it. The computer games? Not so sure. I haven't played them and don't know if I can. No promises on that score. Still, what I've outlined above should keep me busy until Spring.

Ah yes, one more thing. I know I've covered a number of New Who episodes over the years, usually a week to a few months after they aired, so I'll use another new category called SECOND OPINIONS to link to older posts. They're written in a different format, and don't benefit from hindsight, so they might can still be of interest. Many explore THEORIES in longer form than the daily reviews do.

So that's the plan. My pilgrimage, which started on Nov.23 2011, will continue well into a third year.
Doctor Who

Jayunderscorezero said…
I was going to ask if you were going to do Dimensions in Time! Fun fact: it was the first Dr Who 'episode' I ever saw.
October 23, 2013 at 7:50 AM

Zundian said…
Will Enemy of the World & Web of Fear be under the new "second opinions" category, or just tacked on to the end of the original series reviews?
October 23, 2013 at 7:54 AM

Siskoid said…
I've already covered them! I plan to go back and fill out the VERSIONS sections on those episodes once I see the new stuff, and will use social media to draw attention to the new material even if the post itself is a couple of years old.

That was the plan for the recovered episodes of The Underwater Menace and Galaxy 4, which I also have not watched yet.
October 23, 2013 at 7:57 AM

Tallgeese said…
I'd certainly be interested in your take on any of the Missing Adventures, New Adventures, and NA novels you'd care or comment on. Maybe a highlights post on each series - or one best of post on the whole shebang?
October 23, 2013 at 9:53 AM

Siskoid said…
I will be paying tribute to the extracanon in a special Wilderness Years "Who as an RPG" post, otherwise, I consider my knowledge patchy. I've read maybe the first third of the NAs, a few books in EDA range (mostly with Compassion and a little with Angie), and a lot of Big Finish productions, though I'm not current with those either.

My thoughts on specific releases I've read or listened to should be accessible by typing key words like New Adventures and Big Finish in the search tool above this page though. I review them diligently on my Sunday capsule reviews.
October 23, 2013 at 10:07 AM

Randal said…
I think you're opening a can of works with PROBE. Next thing you know, you'll want to do Auton or Shakedown or Downtime, which leads to curiosity about The Stranger, and that way lies madness. MADNESS!
October 23, 2013 at 5:03 PM

Siskoid said…
I know. But I've been known to dabble in madness.

LiamKav said…
Fun fact: "Siskoid.blogspot.com" is blocked by my work filter, as the category "toys and games" are not allowed.

Siskoid said…
Ah, I knew I'd written a piece on the Wilderness Years. Here it is as part of an old Understanding Doctor Who series of posts.
October 25, 2013 at 3:50 PM

Siskoid said…
I'm a big fan of Sarah Jane Adventures too, and I even kept the last season pristine in its package so I'd have NEW episodes to watch at the end of this cycle.
October 26, 2013 at 7:29 AM