October 03, 2013
Who's This? Two-Face's ancestor from the Revolutionary War and page 31 of Who's Who vol.XIII (I'm kidding about the first part of that). 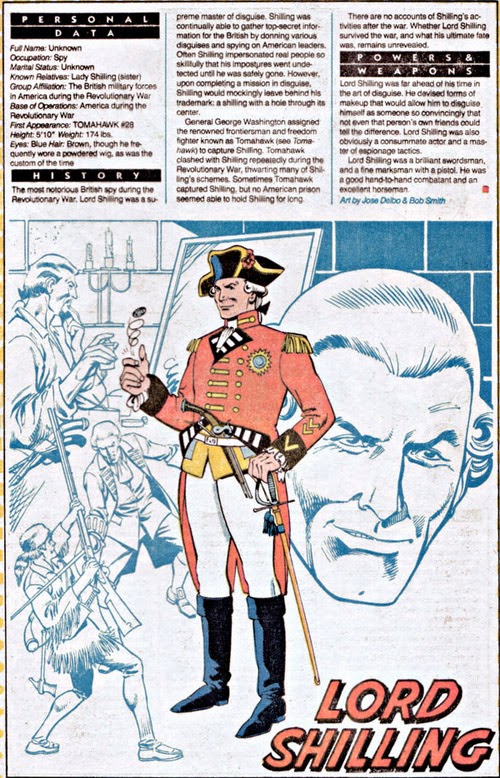 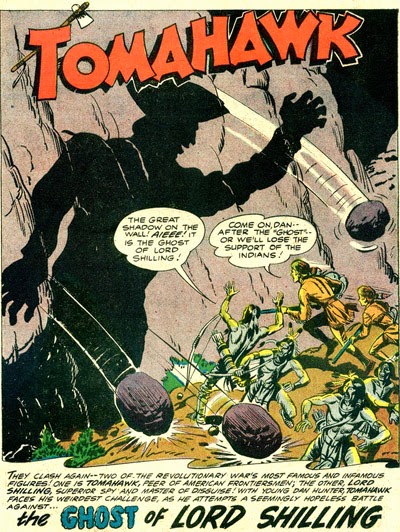 The Revolutionary War can't be won without getting some Natives on board. That's why Lord Shilling is meeting with Blue Otter, "greatest of the great chiefs" to secure his tribe's help against the colonist. 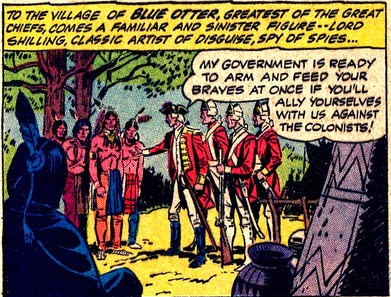 Blue Otter tells him he can't make a decision until he speaks with his chieftains (it's called democracy, Shilling!) and that furthermore, he's meeting with Yank spokesperson Tomahawk on the morrow to get a better idea of his options. Shilling, never one to miss a trick, takes the opportunity to ambush Tomahawk and Dan Hunter the next day with a small complement of Redcoats and Braves from a different tribe, the Mohawks. Good thing Tomahawk was bringing hunting hawks as a gift!

In the feathered fray, Shilling falls into the rushing rapids of the river below and he's left for dead. But that night, near Blue Otter's village... 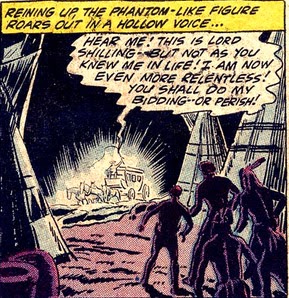 It's the ghost of Lord Shilling riding a phantom coach! When Tomahawk approaches, it goes pooof in a flash of light. The Natives are spooked, but Tomahawk doesn't believe ghosts are real, following racial stereotype lines. I should mention this issue of Tomahawk also features a story with a giant Native demon trampling the countryside, so it's amazing that he would dismiss the haunting out of hand. Tomahawk and Dan take the next day to try and find evidence of a trick, but don't succeed, and the next night, the village witnesses a black ship coming down the river, firing its cannons, then lifting into the air before disappearing. The Braves flee (now there's an oxymoron), but Tomahawk and Dan take a refreshing midnight swim... 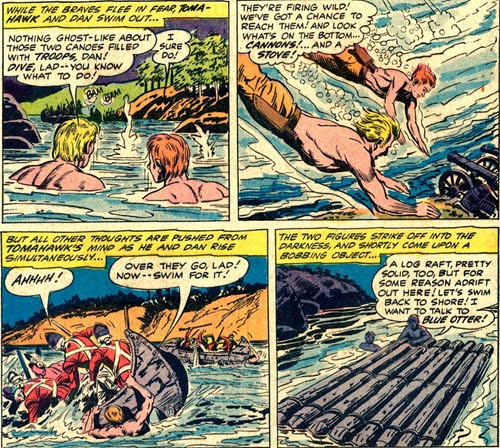 What does all this mean? Well, if the good guys can't prove Shilling is still alive, the Natives will all throw in with the British to avoid getting haunted for the rest of their lives. Pressure's on. Of course, he IS alive, somewhere in a cave explaining his dastardly plan!

That's right, not only was the ship a balloon, made to rise with a stove carried on a raft that also held some cannons which the British were willing to sink in the river (and they're losing this war WHY, exactly?), but the phantom stagecoach, horses and ghostly Shilling were made of origami. ORIGAMI! Shilling's next trick you saw spoiled in the splash page, casting a huge shadow of himself while his redcoats flung rocks at Blue Otter's Braves with a catapult, in time with his shadowplay movements. Because Silver Age. Seeing there's only a half-page left of story to go, Tomahawk barges into his lair a few minutes later and... 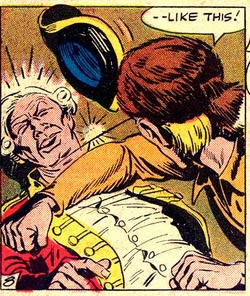 All that's left is for the Native media to interview Tomahawk for the 6 o'clock smoke signal news: 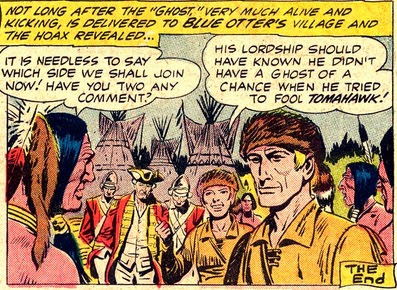 Shilling refused to comment. He also refused to leave a shilling with a hole in it, his trademark according to Who's Who. Do I feel cheated? I might if I knew what a shilling was actually worth, but I've never been able to get my head around British currency.

Who else? Having covered Lord Satanis adequately in a Reign of the Supermen article, I'm just going to skip to the next volume of Who's Who.
Comics Silver Age Who's This?

googum said…
"I've never been able to get my head around British currency."

The Irredeemable Shag said…
Who's Who made him out to sound like a Scooby Doo bad guy always in disguise. And now no shilling?!?! Could Who's Who have been *gasp* wrong??? Or was this simply an atypical story??

Siskoid said…
The first couple stories had the shilling gimmick for sure. By later years, it looks like he'd become more of a generic redcoat adversary for Tomahawk.