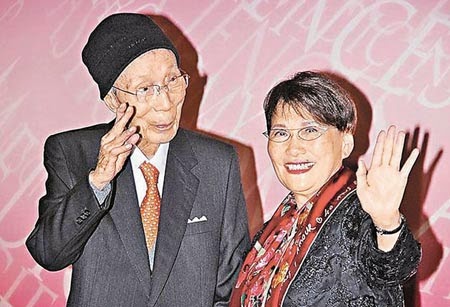 Half of the Hong Kong cinema dynasty Shaw Bros., Run Run Shaw, died this week, age 106 (pictured above at a mere 103, with wife and major Shaw Bros. producer Mona Fong), after what can only be called a rich and full life. His studio's prodigious output through the 60s, 70s and early 80s features dozens of kung fu and swordplay classics that heavily influenced and inspired the likes of Quentin Tarantino and the RZA. The films, produced within an "old Hollywood" studio system, employed hundreds of people and maintain a certain cohesive look through its stable of actors, standing sets, and something called Shaw-Scope that, by the 80s, seemed old-fashioned. In fact, it's really difficult to tell a 60s Shaw Brothers flick from a late 70s or early 80s one. From the Warner Bros.-inspired logo and fanfare to the final freeze frame, the house style survived through the decades. SB morphed into TVB in the 80s, still Hong Kong's most successful television channel, and I was surprised to find that Run Run was behind Shaw Media, a major cable provider here in Canada and elsewhere. As a tribute to Mr. Shaw, I present my 10 favorite Shaw Brothers films.

10. Opium and the Kung Fu Master (Tang Chia)
Despite some comedy stylings early on in the film, and the great action throughout, Opium and the KFM tackles a dramatic subject and China's national shame, as a martial artist loses his mojo to opium addiction and must struggle back to gain his revenge on the drug-peddling villain. Shaw's does real world issues!

9. The 14 Amazons (Cheng Kang)
While later Shaw Brothers' films are often studio-bound, 60s and early 70s efforts tend to have greater production values, epic locations and a cast of, well, dozens, but lots of dozens. 14 Amazons is based on an apparently historical event, when a clan lost all its male warriors and its women had to take up arms. So many of these films are about bros, sometimes with nary a single female character, that a large cast of warrior women makes a great change, and no one can forget the famous "human bridge" scene. The more recent Legendary Amazons remakes the story, but falls short of the original.

8. Come Drink with Me (King Hu)
The film that made Pei-pei Cheng a star as the Golden Swallow (yeah, I know) - she nevertheless shares the story with the endearing Hua Yeah as Drunken Cat - and stands out as one of Shaw's most lyrical films. It's probably Crouching Tiger's most immediate inspiration (the score, for example), but goes farther into the fantastical, with a fierce magical battle at the end that's done with primitive but exciting effects. King Hu's masterpiece is probably A Touch of Zen (another inspiration for Crouching Tiger), but not an SB film. Come Drink With Me started the mainstream wuxia movie genre though, and is still one of its shiniest examples.

7. Bastard Swordsman (Lu Chun-Ku)
A prime example of the 80s special effects movies from Shaw's, this one is completely insane, and revels in its eclectic ideas. With flying chairs of death, silkworm kung fu that actually allows you to throw webbing around, and lots of magic besides, the film is always inventive, often ludicrous and completely entertaining.

6. Return to the 36th Chamber of Shaolin (Lau Kar-Leung)
I won't hide it, Lau Kar-Leung (in Mandarin, Chia-Liang Liu), another recently departed figure in kung fu cinema, is my very favorite martial arts director, and I couldn't help but put a lot of his work in this top 10. His films are frequently comedies, often bloodless, and feature some of the best choreography in martial arts cinema, period. The sign of his direction is sequences where the actors must do 12-16 moves in a single shot. In many ways, his films are ABOUT martial arts, as opposed to stories that FEATURE martial arts. Now, 36th Chamber shows up higher on this list, but the sequel is also one of my favorites. Ridiculously, after playing San Te the founder of the 36th Chamber in the first film, Gordon Liu returns as a raw recruit following in San Te's footsteps decades on. It's essentially both a remake and a spoof of the original, going for broad comedy instead of earnest drama, and features inventive bench fu and scaffold fu. See, everything is kung fu, if you only realize it. Hilarious fun.

5. King Boxer (Chang-hwa Jeong)
Famously the first Shaw Brothers film exported to the U.S. and the beginning of the 70s kung fu craze, King Boxer AKA Five Fingers of Death is truly iconic. Who can forget the re-purposing of the Ironside theme (a trick poached by Tarantino in Kill Bill) that prefigures the use of the hero's iron hand technique, or the literally eye-popping action. I'm surprised Lieh Lo didn't play more heroic roles after this, so often found in villainous ones instead.

4. The 36th Chamber of Shaolin (Lau Kar-Leung)
The best-known formula for martial arts films (yes, that includes boxing) goes like this: Character A has a technique, but is defeated by Character B's technique. Character A licks his wounds and learns a new technique. Character A returns to defeat Character B. At the center of this formula is usually a training montage. Lau Kar-Leung makes this film almost entirely about that training montage. Gordon Liu, in his most memorable role, must jump through Shaolin Temple's various hoops and only succeeds when he creates his own weapon - my favorite - the three-section staff. Amusing challenges, impeccable fight choreography, an intense lead actor... Probably the director's masterpiece, but since this is a "favorites" list, I actually like some of his other movies better.

3. My Young Auntie (Lau Kar-Leung)
Like this one, a comedy of manners that contrasts traditional Chinese culture with Hong Kong modernism, with Kara Hui (the director's then-spouse) as the family "elder" (Chinese families, eh) who visits her much older nephew (played by Lau Kar-Leung himself) and his troublesome Europpeanized son. Don't get all the jokes, but quite fun - there's even a silly musical number in there - and I love Kara Hui. She's in a lot of movies, but most directors never used her physical prowess!

2. Five Deadly Venoms (Chang Cheh)
I've seen a lot of Chang Cheh films and they tend to be kind of samey - sadistic blood-drenched affairs about brotherhood - but 5 Deadly Venoms is the only one I could have considered for the Top 5. It's the prototype for all the rest, and its masterpiece. Director Chang has never been so clear and iconic in his showcase of different techniques, imparting a very special skill set to each of his protagonists, based on five poisonous creatures. But these guys aren't a team. Or at least, not any more. They used to be masked, so there's a mystery of who are the Venoms gone bad. You'll find yourself choosing which Venom you want to be next Halloween!

1. Heroes of the East (Lau Kar-Leung)
Your first will always be special, so this is perhaps a sentimental choice on my part, but by no means a poor one. In this bloodless tale, a Chinese man (Gordon Liu) marries a Japanese woman who argues incessantly that her country's martial traditions are better. Somehow, word gets back to Japan and a group of Japanese martial experts, each with a different weapon or technique, challenge the hero's analogous skill.

Very hard to cut down to 10, I have to tell you, so honorable mentions to Killer Clans, Crippled Avengers, Executioners from Shaolin (crotch fu!), Last Hurrah for Chivalry, Shaolin Mantis, 8 Diagram Pole Fighter, The Flag of Iron. The One-Armed Swordsman, and Life Gamble (that was almost a Top 20, wasn't it?). In fact, some of these may actually be more favorites than the top list, but I recognize their flaws compared to the stronger fare I actually recommended. It's "Shaolin vs. Ninja" or indirect vs. direct, teaching the audience about the very important differences between the two countries' culture (not just martial either). Great stuff, with several clever set pieces. It was my first and it hooked me. Without it I don't know how much Shaw Brothers I would have watched.

I still have a few to watch on my shelf and wouldn't be surprised if I acquired more, but of the 53 I HAVE seen, these were my favorites. Please feel free to shill yours!
Kung Fu Movies Obituaries

idiotbrigade said…
Nah man; Rocky 3's about his friendship with Apollo. The Clubber Lang stuff is the B-Story.

Its all about Rocky and Apollo getting beyond their status as adversaries who respect eachother, and friends. Shattering the color barrier in pro boxing in the process.

Doc Savage said…
I thought that was Rocky IV.

morpheus said…
Last Hurrah for Chivalry was not a Shaw Brothers film. It was a Golden Harvest film directed by John Woo.
August 22, 2015 at 5:43 AM