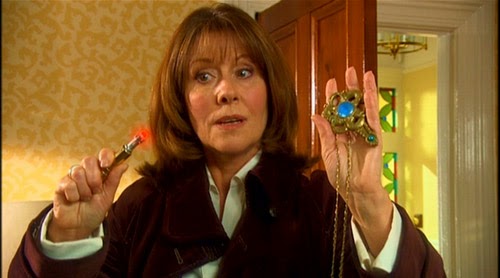 IN THIS ONE... The Gorgon invasion is prevented and Maria finds a way to restore her dad from stone.

REVIEW: Plot continues to marry characterization in Part 2, despite some very plotty escape-and-capture bits reminiscent of some many Doctor Who middle chapters. The best material comes out of Alan Jackson being turned into a statue. The ticking clock is more or less well-rendered (feels like more than 90 minutes to me), but Alan's state does provide some memorable moments. Maria's shock over losing her dad makes her think her mom was right about not being safe with Sarah Jane. She feels bad about it later, but Chrissie did have a point, and Sarah's response to Maria's trauma is rather cold, showing she still has ways to go before regaining her empathy. Maria is put in charge of getting the cure from Bea's addled mind, which she does with a mixture of kind patience and desperate urgency. And then there's the scene between Chrissie and the statue, in which she reveals that she misses her family, and would not have left them if she hadn't screwed up by having an affair. It humanizes this comic foil by making her aware of her own foolishness. The statue weeps, but later Alan doesn't seem to remember the conversation. That lacks coherence, but an otherwise fine use of the idea.

Back at the convent, we get a mixed bag. I do like Luke showing his smarts by MacGyvering his way out of various locked rooms. The secret passage stuff is somewhat cursory, but the bit with the makeshift screwdriver looks like something a kid could actually do. To make the impending invasion more personal, the Gorgon plans to use Sarah Jane as its next host. Parasitic energy Gorgons make for easier effects, a pretty cool way to represent the mythical creature without resorting to complex writhing hair. The garden full of statues is pretty cool too. They put some effort into this. The solution is right out of mythology, of course, and the Church is made blameless by having the nuns wake up when the creature is destroyed. It wouldn't do to give kids the wrong impression. I did find my eyes rolling almost out of my head when the possessed sisters all started chanting a very boring catch phrase ("Serve the Gorgon") though. It's the cheeseball moment of the episode.

What might very well have also been a cheeseball moment is Maria's attempt to cure Bea's Alzheimer's with the talisman, pulling a "factory reset" trick on her based on when she last wore it. Well, that wouldn't have been a huge cop-out, and I'm glad they decided to let Maria be disappointed on that score. If the Whoniverse is to be our world, then real life problems can't get quick fixes. Only fantasy problems can. And that's a good rule to stick to when you're doing drama of this kind. Best keep to the small victories in that case, with Bea given peace of mind now that the Gorgon is dead.