January 02, 2014
"A conscience is like a stone in your shoe. You cannot begin to imagine the relief once you get rid of it." 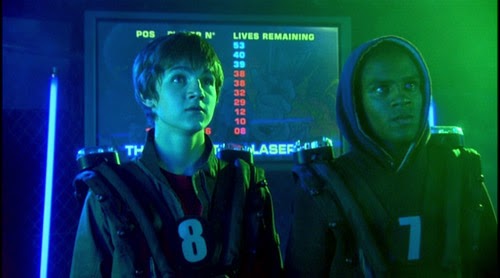 IN THIS ONE... A laser tag emporium is kidnapping kids to turn them into soldiers.

REVIEW: On the surface of it, Warriors of Kudlak would seem to have exactly the kind of plot Sarah Jane Adventures should have - aliens kidnapping kids from an arcade, using a laser tag competition (Combat 3000) to recruit the best ones for their interstellar war. It's in the execution that it gets into trouble. One of the bigger problems is that it treats Sarah Jane as a kind of mini-Doctor who can boffin fantastic machines that work on insane science, and do so on a whim and in a pinch. I'm okay with her having ACCESS to alien tech, but this is entirely different, putting a blowtorch to some musical instruments and shooting what looks like regeneration energy at the sky so it showers jelly beans flavored with the answers she's looking for. It's silly, out of character, and replaces what could have been a one-liner about Mr. Smith detecting alien teleports. Much better are the scenes at Combat 3000 where she breaks into Grantham's office and once caught, painfully zaps his blue tooth by making a last vain-seeming request to put lipstick on. That's the resourceful journalist we know.

Grantham is one of those cardboard villains SJA keeps putting on screen, the kind you see all the time in shows and films made for kids. Is there something I don't know about the young, developing mind that they can't understand who's bad unless they have villainous expressions on their faces at all times? Anyway, at least the other guest characters in the story are more credible. The alien Kudlak is a hissing fiend, but can't do much more under that cool animatronic head piece. He does exactly what he's meant to. Lance's mother is properly sympathetic, and it's interesting to see new mother Sarah Jane confronted with that kind of parental grief, just as she's about to see her own son get taken away. Brandon, the tough arcade kid, works well too. And there's the Combat 3000 clerk who's very amusing, despite having to deliver obvious exposition, bringing no enthusiasm to a soul-crushing job and honestly recommending Sarah take her business elsewhere. And Sarah trying some of Clyde's slang to the proceedings provides an extra bit of comedy in the "don't, don't, don't do that" mold. But you know what's really missing? Maria's family. I've been looking forward to scenes in the Jackson household every episode and miss them when they're not there.

The way the kids get involved is a bit messy from a plotting point of view. They get handed coupons to Combat 3000, but that's just a clue, not the reason. Then there's the disappearance Sarah Jane is investigating, one of the kids' classmates, so they've got a personal stake. Especially since Luke, still learning about humor, gave him an inadvertently hurtful nickname. We're almost into after-school special territory here, though the characters' reactions are generally well-judged, especially Sarah Jane's, who admonishes Clyde for possible bullying, but makes a major course correction when Luke might be to blame. It's less about learning lessons than it is about characterizing their relationships. Luke runs off, and Clyde follows, which leads to the unrelated question about why people play games and THAT gets the kids into Combat 3000. It seems like a more efficient route could have been taken to get them there, though at least the laser tag scenes aren't too tedious, and it's nice to see Luke and Clyde think outside the box and work as a team.

REWATCHABILITY: Medium - The premise is fine and most of the characterization is too, but the plot's silly convolutions are just there to keep the episode from under-running.
Sarah Jane Adventures

LiamKav said…
I remember reading an interview with George Lucus where he spoke about audience screenings for The Empire Strikes Back. He mentioned that for kids of a certain age, when they go to the "I am your father" line was perfectly understandable, but for children just one or two years younger, they all said "he's lying". They couldn't cope with the idea that this bad guy was the dad of the hero.

So it's quite possible that the bad guys are made more bad because at the potential age range they are aiming at, kids DO have more of an issue with shades of grey like that.
January 2, 2014 at 7:56 AM

Siskoid said…
Maybe. Though Vader could theoretically been lying to screw with Luke's head, and the children who thought he was lying really just not wanting to believe this was true. I saw that film when I was a child, just 9 years old maybe, and I don't remember thinking he was lying.

If it bothers me in SJA at all, it's that I'm an adult and writer Gareth Roberts, on the team's behalf, said they were making a program NOT for kids but for everyone. And in many ways, it is, especially later. All ages, but not kids only. When I see acting like that, it's just bad acting of the kind actors seem to think is what's expected of them in kids' shows. It talks down to kids, in my opinion. I mean isn't it clear Grantham is bad because he kidnaps children, tries to shoot Sarah Jane, etc.?

Or look at Part 2, where the growling alien is shown not to be evil after all. And yet, still a growling monster. So either there's specific acting you must do to show good/evil, or characters are allowed to surprise you by being one but seeming like the other. But human villains seem to think they have to wear their villainy on their sleeves and overact the part.
January 2, 2014 at 3:43 PM