January 03, 2014
"Maybe if everybody could see the Earth from up here, they might appreciate it more." 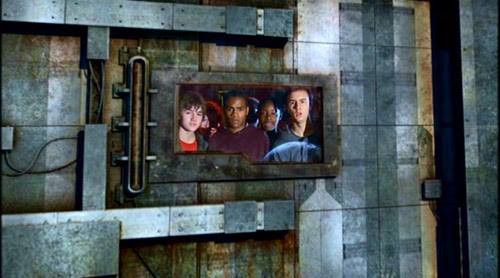 IN THIS ONE... The team finds itself in orbit, on Kudlak's ship, but is the war over?

REVIEW: There are some things to admire in the second part of the story, but mostly, it's a bit of a hack job. Which is too bad, because it gives the team a rare chance to leave the confines of their Earthbound (and often Ealing-bound) setting. And though seeing Earth from orbit has a magical feeling that affects even Sarah Jane, Kudlak's ship is represented by the same old industrial site so often seen in Doctor Who, even if the lighting at least attempts to give it is own look. But design is the least of the story's problems. The old trope of a computer gone mad and running a program that is no longer applicable is just that, old, and the execution is muddled in any case. Does Kudlak know his mistress is a machine or is this news to him? It's not clear, nor is the identity of the soldiers the kids run into. Looking for all the world like motorcycle enthusiasts, they could be grown-up humans, Uvodni like Kudlak or slabs. We just don't know and they disappear from the episode when no longer needed. In fact, what happened to all the kids previously captured by Kudlak? Are they on board and returned to Earth? Were they sent off to fight in a war that ended 10 years ago? Where are they now? It's not explained. Kudlak's human accomplice, the caricatured Mark Grantham, also disappears from the story and Sarah Jane promises us he'll get his just desserts some day. Well if he did, it wasn't on the program. He never returned, nor would I have wanted him to, but that's a needless loose end.

Beyond the plot, I'm not convinced by writer Phil Gladwin's dialog. Jen, the girl who might as well have been Kelsey, is a rude little thing, and basically there to give Clyde someone to flirt with ONLY to see his hopes dashed when Luke gets a kiss instead. While that's perfectly fine for the show's comic foil, it leads to a painfully unfunny scene in which Luke asks him about girls, and everyone laughs and laughs. Between that, the malfunctioning computer, and the message of peace, it looks like Gladwin poached most of his story from classic Star Trek episodes. Luke's magical hacking skills make him the Spock of the bunch (he does look like a young Spock, doesn't he?), resolving every problem at once with the help of a simple mobile phone. Meh. And what is up with staying across the street to avoid Lance's reunion with his mother? Am absurd piece of staging.

I do like how Kudlak was handled though. This aging general, ready for the war to end, but doing his duty nonetheless. When he realizes his mistake, he immediately wants to make amends, and deserves Sarah Jane's respect, subtly given by her use of his title. This is an honorable man following unconscionable orders. He's still a villain, though unlike Grantham, he doesn't see himself that way. Mislead and working from a false premise, certainly, and it's Maria that makes him realize this with an impassioned plea. The message is standard SF stuff, but at least the kids are winning spokespersons for the human race. Make games, not war.

Craig Oxbrow said…
I did like Sarah Jane's threat to Grantham, though I was surprised to hear it in a children's show.
January 3, 2014 at 10:48 AM

Anonymous said…
Luke always seemed more Data than Spock to me. He's more about exploring his emotions (and other human traits) than suppressing them.
January 3, 2014 at 4:16 PM

Siskoid said…
I completely agree, but that would have meant TOSsing my classic Trek comparison out the airlock.
January 3, 2014 at 4:53 PM