Doctor Who #779: Voyage of the Damned 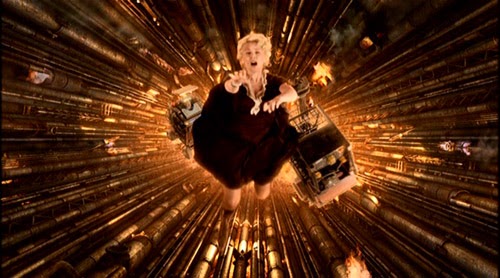 IN THIS ONE... Space Titanic, Kylie Minogue and Wilf's first appearance on Christmas Eve.

REVIEW: I was at once dreading having to watch this again and hoping I could look at it from another angle that would redeem it. No such luck. There is so much that's wrong in Voyage of the Damned, I'll have to gloss over many of them, but let's at least have a go at the big ticket items. Like the tone. For a Christmas episode, it's pretty damn bloodthirsty. I get that in the UK, watching disaster movies on the telly is a holiday tradition, but that's not the case here, or at least, not in MY home. So that doesn't work for me, but even if it did, I'd be annoyed by the clichés (boring squeezing through debris, vertiginous drops, and everyone having some greedy secret that may or may not mark them as doomed) and irritated by the moral twist on the formula. Because in disaster films, while good people do die, the more selfish a person, the happier we are when they do die, and you can be sure they will. Not here. RTD simply refuses to obey Santa's naughty and nice list, killing off most of the good people, but leaving the selfish, cowardly, callous, greedy Rickston Slade alive (dude, that's not even an alien name) AND richer than ever. Mr. Copper also makes it out, and while he's not a bad guy, just a fool, he's also given a million pounds on his credit card (uhm... that's not how credit cards work), because money is the true meaning of Christmas, apparently. And you have plenty of tonal shifts besides. On the one hand, strong dramatic performances from Russell Tovey and Geoffrey Palmer on the Titanic's bridge, a premise that hinges on the captain committing suicide and mass murder, and a shot of a Host's halo beheading someone. On the other, a cartoon villain mugging for the camera - Max Capricorn is as two-dimensional as they come - Mr. Copper's bungling of Christmas traditions (amusing at first, but it keeps going and then you realize RTD already did this joke with Cassandra back in episode 2), and those same halos bouncing off people pretty harmlessly.

The other problem for me is the on-the-nose use of the Doctor as God figure. It elicited a smirk in past episodes, but here, it's completely out of control. There's the potentially offensive notion that the Doctor got the last room at the inn in Bethlehem, for starters, followed by his taking control of the Host with the snap of a finger, taking him flying through the ship... Operatic cheeseball at its worst. The notion that had the ship been working perfectly, Astrid Peth COULD have been resurrected is a disturbing one, but seeing the Doctor throw a tantrum because he DOESN'T have control over life and death, well... It's a good character moment for this Doctor, who's essentially been an unstoppable wizard for the past two series, but it's also childish and ugly. Astrid had to die the moment she expressed interest in joining the crew, of course, because you can't very well have Kylie Minogue on staff for more than one stunt appearance. (You have Kylie on, AND an original song, BUT you don't have Kylie sing?! What the hell.) Astrid's name is an anagram for TARDIS, if you didn't get that, just another indulgent, "naughty" touch that had RTD giggling, but the rest of us yawning. As a companion, she's fine, and is the Doctor's kindred spirit, someone who looked at the sky and wanted to leave home. But that's all she is. Every other character is more interesting than she is. She's a cipher, basically there to flirt and hug and kiss the Doctor. Tennant manages to play the toll her loss has on him, but we must also contend with whoops of joy while flying the Titanic, which comes right after her needless death. (Yes, needless. The way it's staged, she could easily have jumped out of the forklift. Same thing with Foon, whom he had ample time to save.)

Even the moments that are clearly meant to be fun or cool or kickass feel stupid and forced to me. The cheesy John Woo moment as the sad Doctor walks away from explosions. Naming Gallifrey, which really doesn't mean anything to the group of survivors. The "three questions" gag the Host respond to, which is just stupid. Information: The Doctor is stupid for wasting his questions too, like he's been lobotomized for the length of the joke. The Queen running out of Buckingham Palace waving at the Doctor. Astrid being turned into stardust and playing Wonderful World of Disney in the sky as if still self-aware. The Doctor kissing her ghost - how does that work? The hand gag copied from The Robots of Death. The whole bit with equating cyborgs with the LGBT community rings false and hackneyed, with proud Bannakaffalatta serving as deus ex machina in the end. Even the "Allons-y, Alonzo!" joke falls a flat in the context of this dreary exercise.

So what do we have left? A nice enough song. Fairly cool ship model effects (the inside stuff is a bit rough though, and the sets jump between lavish and the same old abandoned factory). A mostly pleasant cast. And of course the first appearance of Wilfred Mott, the man who will soon be revealed as Donna Noble's grandfather. He's a great soulful presence here, a man who refuses to leave London on Christmas, although the thoughtless script makes him stay in his newsstand ALL NIGHT, UNTIL DAWN, IN A DESERTED CITY. I'm impressed with his constitution - I go to bed at 11 P.M. on Christmas Eve, thanks - but that is some futile, futile living.

SECOND OPINIONS: My original review, called Have a Pretty Grim Christmas, Actually, isn't quite as down on the material, but almost.

VERSIONS: The deleted scenes on the DVD explain why Slade could not use his "vone" to call for help, and include another game of 3 questions as the Doctor tries to wrest control of the Host away from Max.

REWATCHABILITY: Low - A complete disaster. It is, to me, the very worst of the RTD era.
Doctor Who

Madeley said…
Agree completely, this is the nadir of RTD's career for me. If I recall correctly from his Writer's Tale book, he had a major writer's block and put off writing this episode until the last minute, and then rushed it. It really shows. It's not just the writing, mind. The entire production looks awful and cheap.

The homages to the Robots of Death are a really bad idea. Not a good idea to remind people of classic Who at its very best in the middle of dross like this.
January 9, 2014 at 6:10 AM

Toby'c said…
I've never had a problem with this one, though it probably helps that, at the time, the ABC didn't show the Christmas episode until about six months later, in time for the new series.
January 9, 2014 at 6:20 AM

Madeley said…
Also, just remembered the OTHER reason I was so disappointed was that, on no evidence whatsoever and forgetting Ecclestone mentioning being on the ship when it sank, I'd got it into my head from the title alone that it was going to be a dark, gothic, historical Christmas ghost-story episode featuring the real Titanic.

Jayunderscorezero said…
Based on your reviews, I'm realising that every RTD-era episode I've seen is actually one of the very worst.
January 9, 2014 at 7:46 AM

Timothy S. Brannan said…
Generally speaking I am not as critical as you are on Doctor Who, I am just so happy to be having new Whos! But I can't disagree with you on this one. There are way too many problems with this one.

Humans that know nothing of Earth really and yet able to name a Star-ship Titantic? Cyborg racism? Kyle as fan service?

Siskoid said…
Yeah, looks like we have achieved consensus on this one, though I know people who love it. That's Doctor Who all over.
January 9, 2014 at 10:41 AM

On one point- as a person of faith and a Doctor Who fan (not a fun experience a lot of the time), I haven't run into anyone offended by the last-room-at-the-inn bit. Heck, this is one of about 3 stories that actually seems to CONFIRM historicity of the Bible in the Whoniverse. And there's nothing particularly offensive about being told the inns were all full; the nativity story already said that. :-)

So, while there are plenty of frustrating digs at the church (the most blatantly offensive typically considered the Planet of the Dead 'What really happened is...' implications, which is a direct attack not on the church or people of faith (let's face it, we deserve a poke every now and then), but at the heart of belief), this is not- at least in any of the interfaith discussions I've had- one of them. This is actually one of the one's seen to balance the scales.


And that footnote no one cares about just went on waaaaay too long.