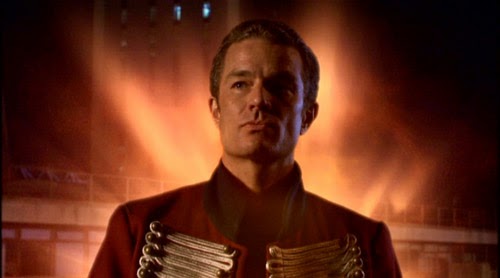 TECHNICAL SPECS: This episode and all episodes through Exit Wounds are available in the Torchwood Season 2 DVD set. First aired Jan.16 2008.

IN THIS ONE... Captain Jack's ex, Captain John Hart, comes to town and starts causing trouble.

REVIEW: With that opening sequence, Torchwood finds its sweet spot. An old lady sees an alien with a blowfish head driving a sports car. Then the Torchwood SUV stops and asks if she's seen such a thing, she points our heroes in that direction. Her reaction: "Bloody Torchwood." That says it all. Let's just have FUN this season and not care so much about making this depressing and ADULT. (Not that there won't be such moments.) I wouldn't say Chris Chibnall is a completely different writer from season 1 (there's still one bestiality joke too many), but you simply can't compare this episode with the likes of Cyberwoman or Countryside. It's FUNNY. Lots of fun lines, lots of energy, and in the character of John Hart, lots of knowing mockery of the show's elements. As played by James Marsters adopting a British accent again, it's hard not to take his thirst after throwing a man off a roof as a reference to Spike as well. It works! As do the blowfish on coke, the Star Wars joke, the sexual banter that makes Jack more like Jack than he's ever been in Torchwood, murder rehab, etc.

And the director knows this is supposed to be fun. There are lots of stylish tricks to make the characters more badass, stuff right out of the John Woo playbook, and amusing tricks that share a DNA sequence with Baz Luhrmann. Jack meeting his ex starts as western showdown, becomes a make-out session, then turns into an all-out brawl. Cameras spin around the characters. The music rocks. The look and feel of it definitely help excuse whatever problems the plot might have. One of these is just how Last of the Time Lords connects to Kiss Kiss and the current status quo (see Theories). The other is just how slim the plot is, though that's largely misdirection. The fact that Hart was working with the blowfish means there's a good chance everything he's said has been an elaborate con. If not, then this is a quest for canisters posed in different spots around Cardiff ready to be picked up while Hart amuses himself hurting the Torchwood team with paralyzing lip gloss (he beats out River Song on the dangerous make-up by a couple years) and other weapons. No. There's more here, and we'll see this character again. Great, because he's a very entertaining psychopath.

This season opener also takes the time to reposition the cast's relationships, which is much appreciated. While Jack was gone for an indeterminate amount of time, Gwen's taken a leadership role, and Ianto's come into his own. They're all less reliant on him, and more than a little pissed off, though I love how they have to admit it's more fun when he's around. They all learn he was a Time Agent (whatever that means), but a new secret is unveiled when Hart mentions having found Grey. During the hiatus, Rhys has asked Gwen to marry him, which makes me quite happy. We want this "normal" couple to succeed, and none of these Owen/Gwen shenanigans, please. They even do away with the Jack/Gwen Doctor/Rose sexual tension, which was never really explored, so here gets a "farewell" scene. Instead, Jack asks Ianto out on a date, and the latter is surprised to find himself accepting (oh those 51st-century pheromones!). A real relationship for Jack? Is he ready to settle down at last? If he is, so is Owen, who gets Toshiko's hopes up by admitting he's tired of the one-night stands and is ready to find that girl he has something in common with. This becomes the will they/won't they couple of season, and between Owen's cruelty and Tosh's sensitivity, definitely better television. P.C. Andy's back too! I like where everyone's starting from (Cardiff included), so when Jack asks "Didja miss me?" with that shit-eating grin... yeah, yeah, I did. Welcome back THE REAL Captain Jack. Let's get crazy.

THEORIES: The only way to make sense of the mismatch between Doctor Who and Torchwood is to assume that the Cardiff sequence in Utopia occurred at some point before Martha joined the Doctor on his adventures (from an objective point of view, not from Martha's, of course). It can't be TOO long before, because there are Vote Saxon posters up in Cardiff since "Captain Jack Harkness". So the events of End of Days, including Gwen's long-ish mourning of Jack, have to take place during the election campaign. How long is the campaign period in the UK? About a month is normal. So if the posters just went up in Series 1's penultimate episode, and no more than a week went by before the TARDIS showed up in End of Days/Utopia, Jack would have been gone, from Torchwood's perspective, some three weeks. Three weeks during which Gwen became team leader and got engaged, and the team was sent by the new PM (possibly then-Defence Secretary) Harold Saxon to Tibet on a bogus mission (one hopes they met some Yeti). When Jack returns to the Hub at the end of Last of the Time Lords, it's daylight, so presumably, the team was already out hunting the blowfish alien, and Jack only catches up to them that evening. It just about works.

VERSIONS: Series 2 episodes were repeated in edited "child-friendly" form on BBC2 a couple days after the original airing. Because I don't know what was removed exactly, this will be the last time I mention it.

REWATCHABILITY: High - Full of action and dark comedy, a great guest-star, and the relationships advanced to a better starting position... Torchwood finally found its tone.
Torchwood

John Nor said…
You mention Cyberwoman as a contrast but I think this and that are the same sort of "Torchwood is essentially ridiculous and that's a cool thing as all the best SF is" stories.
January 12, 2014 at 3:20 PM

Siskoid said…
Cyberwoman is played without humor though, so the ridiculousness is tainted by a self-important and heavy tone.
January 13, 2014 at 10:16 AM