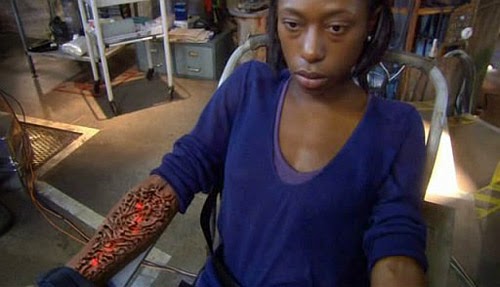 IN THIS ONE... Gwen befriends an alien sleeper agent who desperately struggles to hold on to her human identity.

REVIEW: Ooh, I don't think I like the tweaks made to the opening narration... "and Torchwood is ready"... doesn't have the same impact. But the episode itself is quite good, balancing well the kind of dramatic episodes that were the best of Series 1 with the black comedy of the Series 2 premiere. It starts with a locked room mystery, though writer James Moran doesn't keep it mysterious for long, no doubt realizing Sleeper's title kind of gives it away. Nikki Amuka-Bird's performance as Beth, a woman terrified to discover she's not human but rather, an alien killing machine, is what makes the drama work. Somehow, this particular sleeper's imprinted personality became stronger than the original programming, and she becomes desperate to stop what's to come, to save her husband (but her body rebels against her mind) and the world she (thinks she) knows, even if it means committing suicide by Torchwood in the end. Her bond with empathic Gwen, her fear of Jack, her complete bewilderment then shock when she's confronted with her alien nature, it's all grounded in a reality lent by the actress, and the Torchwood characters react very humanly to her.

Of course, she's not alone on our planet, and three other sleepers are activated and start causing mayhem. The central theme isn't hard to decipher. It's terrorism, pure and simple. It's Torchwood doing Spooks, right down to the shaky, zoom-happy camera work. While this was sometimes awkward, it did work as shorthand for the kind of story being told. The acts of terrorism are meant to shock - two baby carriages get hit, for example - but thanks to Beth, the terrorist is simultaneously humanized, shown to have remorse and doubts. Of course, the other sleepers are cold psychos, so the metaphor is kind of fuzzy. Sadly, though we're chillingly told the sleeper race is "already here", and that Torchwood is ready, etc., "Cell 114" never made a repeat appearance. I guess they're still here. Among us. Maybe I'm one of them. Brrr.

You wouldn't think there'd be a lot of room for comedy in such a bleak script, but  there are lots of cracking one-liners in the script, usually coming from Ianto. There was a hint of this in Kiss Kiss, Bang Bang, but with Sleeper, the new and improved Ianto is really introduced. This guy has gone from "why is the tea boy considered a member of the team?" to FAVORITE TORCHWOOD OPERATIVE EVER in the space of a few hilarious lines dripping with sarcasm. He was always a smartass, in that he was the local boy who knew all sorts of useful trivia, but now he's got the personality and dialog to go with it. He's basically one of us, walking through the show and commenting on a cliché here, a cheesy moment there, turning them on their heads and making them fun rather than potentially trite. It's not a complete reinvention of the character - there was all that "life knife " stuff in Series 1 - but it is a welcome expansion on those traits. Best bit: His reaction to Owen wanting to meet the coming apocalypse by having an orgy.