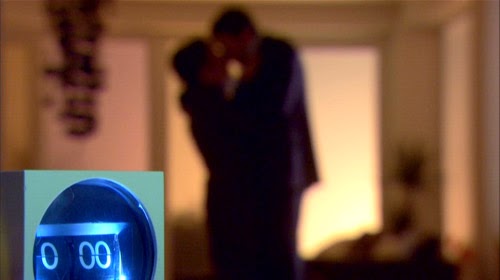 IN THIS ONE... A WWI soldier kept in storage is woken up once a year until he can close off a time loop. Obviously, Tosh must get romantically involved with him.

REVIEW: Going from the evidence of Doctor Who alone, Helen Raynor isn't a very good writer. Her Cyberman and Sontaran two-parters feel like producer shopping lists brought to the screen in unremarkable assembly. But between Ghost Machine and this episode, Raynor shows real talent. Torchwood's darker tone definitely suits her better. It's always a nice surprise when a Torchwood episode comes off as "sweet" (see also Random Shoes), and To the Last Man offers a sweet, if tragic, romance, along with a timey-wimey plot, a spooky ghost story, worthy themes and a peek into Torchwood's history. Two versions of Torchwood helping each other from across the rift is a great little idea, and help differentiate this episode's premise from the admittedly similar "Captain Jack Harkness". We only get a glimpse of Gerald and Harriet, but what's there is enough to intrigue and send fanfic writers to their laptops. And we'll get more tidbits from Torchwood's past through the season, adding depth and scope to this part of the Whoniverse.

One of the things that makes this episode stand apart is that it is so incredibly sunlit. Tommy's one day in 2008 is a beautiful one, by all accounts, perfect for a romance, and yet the show manages to stage some creepy hospital "ghost" stuff in that light. That abandoned hospital is a great location, and well used in the mysteries surrounding Tommy's time-saving purpose. As with the best stand-alone Torchwood episodes, the rift (and/or its flotsam) is used to explore some impossible idea that essentially reveals something about the human condition. In this case, a man experiences only one day a year for 90 years. For him, fashions change drastically week to week. The death of his parents in the thirties is still a fairly recent event. And no matter what, war seems to be a constant on the news, only the venues change. That last one is how we all experience the world, I'm afraid. If wars keep happening, the way we treat our soldiers has evolved, something brought to bear in Tommy's final fate, executed for cowardice because of his shell shock, today known as PTSD. His being sent back to war and subsequent death is made known to him, which allows him to actually be a hero, though not one without doubts, regrets and fear of what's to come. The mechanics of this "stitch in time" (a more comprehensible metaphor than Jack's Quantum Leap-ish crumpled paper) are, as usual, what's needed for the plot, so Tommy somehow reverts to his 1918 brain when he goes back, which leads to a psychic projection injection gag that comes out of nowhere, but works emotionally.

At the heart of the episode is the emotional story anyway. Greeks Bearing Gifts had already examined Toshiko's loneliness, and To the Last Man brings it back to the foreground. She dresses up for this boy from the past, acts as his anchor, takes him out... She obviously looks forward to this annual date and though Tommy's only known her for a matter of days, from his point of view, the attraction is mutual. And yet, Tosh holds back. She's too old for him, she can't maintain relationships in her job, the kid is doomed to eventually go back to the past... Every excuse is a good excuse until Tommy corners her and makes it all irrelevant. It's so cute to see Gwen and Jack play the parents in this, sending them off on their date, and more important still when Jack lets Tosh take Tommy home, a sign of trust that she won't let her feelings get in the way of the mission. She won't run off with him. Owen's great in this too, showing real concern and caring for Toshiko in two key scenes. He sincerely doesn't want to see her hurt, even though he's hurt her before, and brings her comfort after the difficult task is done. We're seeing a new side to their relationship. Though he's been a real jerk to her in Series 1, the two of them have worked together for a long while and are closer than we realized. They confide in each other, they have each others' backs, and we finally see why Tosh has feelings for him, I think. In the background, Jack and Ianto finally(?) go for it (at least, on screen), but what's more interesting to me is that there's a sense Ianto's biting humor really hides a deep depression. I love the new Ianto, but he's still the tortured soul he was in Series 1. And no matter what weaknesses the plot might have (whether you want to criticize the over-familiarity of the premise or the convenient twists at the end), the final shot really brings it home on a high. Tosh walking away from Owen, intense but mixed emotions playing across her face. It's a great acting moment from Naoko Mori, and takes an already great episode to another level.

VERSIONS: Apparently the American DVD release retitled this episode "Last Man Standing"(?). Not the whole Region 1 release though, since my copy is normal and correct.

REWATCHABILITY: High - By turns sweet and spooky, thought-provoking and intriguing, amusing and tragic, this is a great, emotional episode and a wonderful showcase for Toshiko.
Torchwood