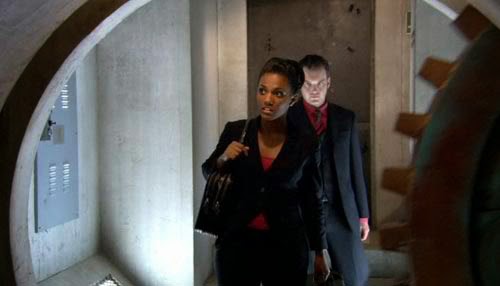 IN THIS ONE... Martha Jones, parasites that cure all your ills before they kill you, and oh yeah, Owen is killed.

REVIEW: Martha's return has all the hallmarks of her joining the show permanently, but it's a ruse to amp up the tension and shock value the first time you see Reset. After all, Torchwood already has a Doctor in Owen, so her new UNIT credentials, her familiarity with Jack, how much sharper she seems to be than Owen, and his finally agreeing to go out on a date with Toshiko... All that spells doom for one Dr. Harper. So when he gets shot in the chest and is declared dead in the episode's closing moments, it's very much meant to look permanent and irrevocable. Even the "next time" teaser plays along. Even when you know the truth, it won't be a neat little resurrection. We can still enjoy the banter (the smugness is a fun act, unlike Rose's true blue arrogance), and Martha getting to know the team, share gossip about the immortal captain, etc. Ianto's description of Jack's sexual proclivities and Martha wondering if she and Gwen are the only ones in the universe who never got it on with him are really very amusing. For Martha, it's a strong guest role, going undercover, getting into some action and almost getting killed. She's clearly the star here and is treated like it. But like I said, it doesn't really detract from the rest of the team so much as allow us to believe she's really a part of it.

Between the high profile guest star and the shocker ending, the plot ends up being forgotten. It's not a bad one; it just takes a back seat to everything else. It's a medical mystery up Martha's alley, with many clues, witnesses and victims, done up with montage, music and unique blobby transitions. It moves at a good pace. Martha's infiltration of the Pharm shows us a little of how she might have operated during her "year of hell", alone and thinking on her feet, and introduces Torchwood's camera contact lenses, items that will return in an important role in Series 3. The alien creatures are a bit on the CG side, but nonetheless well realized, their life cycle abused for medical research with lethal consequences. (I also like how Weevils can be harvested for pesticides.) Martha gets in hot water because of her time traveler's immune system, which is intriguing. Tosh's remote controlled corpse is a darkly comic way of getting onto the Pharm's premises.

But the last act is problematic, because Owen's death smothers everything else. The amoral scientist's own death is anticlimactic and everyone just stands around looking sad, though seconds earlier, they were involved in a standoff with people still alive and on the scene. That always struck me as off, the emotion of the scene winning over its logic.

REWATCHABILITY: Medium-High - Great to see Last of the Time Lords' ultra-capable Martha again, and she's well used both in the perhaps ordinary plot and in the dark over-arcing story.
Doctor Who Torchwood