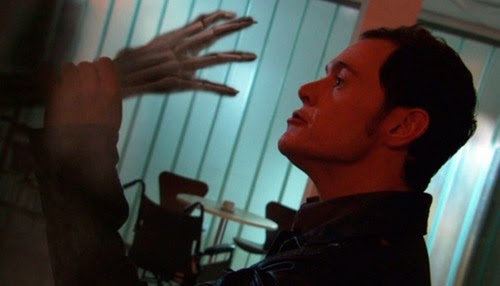 IN THIS ONE... Owen is revived with a second resurrection glove. It releases Death, and undead Owen has to fight it off in a hospital.

REVIEW: We desperately needed this episode to be better. After all, it's an important one. Owen is brought back to life and given a new status quo and Martha still guest stars. However, writer Matt Jones makes a lot of missteps, and seems to be borrowing everything that could actually work from another source - including his own Doctor Who two-parter, The Impossible Planet - which considerably reduces those elements' potency. Obviously, he's following a brief; he must present Owen's new state of unlife which will carry through to the end of Series 2. One might ask of the production team if this is a good idea. Not that there won't be some good stories to come out of it (we'll see), but now Torchwood has two immortal members, each with a different shade of the power. What is this, Being Human? The episode does seem to exist in a slightly alternate universe steeped in the supernatural rather than science fiction. That's not unheard of for Torchwood, but here it seems to go too far. It's not that Owen brings a demon of sorts with him from the Void - End of Days and The Satan Pit both use this idea - but the legend that surrounds this Death if rather more Buffy than Doctor Who, and includes a girl named Faith, which may be the young Tarot reader (judging by her appearance in Victorian Cardiff later in Fragments), but never explicitly said. Jack goes to a Tarot reading and uncovers a second resurrection glove under an abandoned church/Weevil nest? That seems right out of a different show.

The script is a complete mess. It features a strong horror element, with a cool skeletal Death monster, and gives Owen a real hero moment when he gives a boy with leukemia hope by literally beating death. But it's also go Owen power puking beer and expounding on his life's last farts (on the audio track, thanks). Oh, and the second glove turning into an armored version of the Addams' Family's Thing. Where's Graham Chapman to stop the proceedings with his "silly, too silly" routine? It's not just tone either. Martha serves no real purpose except for getting turned into a wizened old woman by the creature. Why doesn't it kill her outright? And how is she restored when Death is banished? Cheap jeopardy, cheaply resolved. Jack's obsession with resurrecting Owen is likewise suspect. You mean to tell me he went through all that trouble, even after the whole Suzie fiasco, just to ask Owen for some passcodes? What kind of outfit does Jack run that 1) access codes aren't made available somehow when a team member dies and yet 2) team members are expected to die young? Would have worked much better as a sign that his team means the world to him; this access code business just makes Torchwood look silly. As does Gwen shouting things like "This is Torchwood, evacuate the hospital!" There's ignoring the whole super-secret organization thing, and then there's making it something everyone knows about.

I'm also puzzled with how the Weevils are treated in this episode. While I like the idea that they worship Death and are attracted and cowed by dead Owen, it's not entirely original. Wasn't he already "King of the Weevils" after Combat? That story showed he could cow them with a growl, a subplot then forgotten and here brought back in another form. It's not a follow-up so much as a reboot. Weird. But while there are some good moments for Owen - his saving the boy, his defiance, his making Jack accountable, his existentialism - too much of the episode feels like a collage of old ideas. Fights in bars, the zonked-out camera trick from Day One, the glove getting shot, Owen Weevil King, demonic possession, beloved characters in aging make-up, Jack going on about the curse of immortality... We've seen it before in Torchwood or Doctor Who, and not too long ago. What doesn't bring on a case of déjà vu doesn't seem to fit the universe.

VERSIONS: The DVD includes a very brief deleted scene that shows the Weevils following Owen around.

REWATCHABILITY: Medium - But just. A cool monster, some very good bits for Owen, a certain creepy frisson. Unfortunately, the unoriginal script flails about like a trout in a dry bucket.
Doctor Who Torchwood