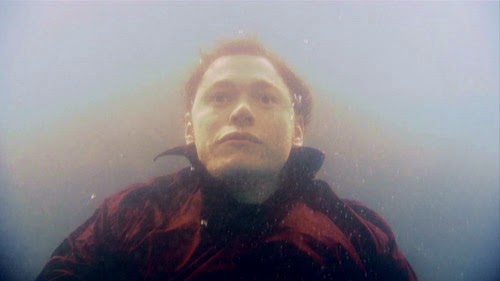 IN THIS ONE... We explore Owen's living death and he meets Richard Briers and a girl who wants to jump off a building.

REVIEW: What would it be like if all our bodily functions stopped and we could experience it? A Day in the Death follows Owen's recuperation from recent events, feeling the loss of things we take for granted. His unlife means no food, no sleep, no pain, no feeling, unnoticed wounds and no healing, no body heat, and no breath to save a man's life with CPR. It's brilliantly done both in the direction and in Joseph Lidster's script. On the one hand, you have the atypical structure, introducing the mystery of what Owen is doing on a rooftop, talking to a suicidal young woman. On the other, you have the story he tells, initially about his powerlessness and his meaninglessness, but eventually about his finding hope, and then wanting to share it with the jumper.

What's great is that there's a kind of poetry at work. Things are shown, not said. Owen's 36 minutes underwater, for example, silently screaming his head off. No one can hear him, he doesn't exist. The same kind of disconnect happens earlier when Tosh starts chattering and the sound drops out. He's not allowed to contribute to the team, he's been benched, and yet he hangs around. People don't listen to him; he blathers on about the inconsequential, like his dislike of Tintin. He's the coffee boy and he can't even drink coffee. He's a ghost among them. And that's why the Pulse, this week's MacGuffin, despite not being explained properly, works. It's a symbol. It keeps the collector, Mr. Parker, alive, not through its innate energies, but as a placebo. When it passes into Owen's possession, it signals a change of attitude. He tries to save the dying man, admits his fears of the Void to Tosh, and spends the night talking a young woman down a ledge. He doesn't matter anymore, but his actions can. Selflessness is all he has left.

Richard Briers plays the dying collector Owen visits, a sympathetic performance that tempers bitterness and desperation with charm and melancholy. It IS a bit long however, as is its musical lead-up, though there are some neat heist-type bits involved.The girl on the rooftop is effective too, if in a more limited role. All I can say about her is that surely, her wedding day was worse than Gwen's will be. I don't know if her story is meant to be foreshadowing or not. As for the rest of the team, Jack has strong misgivings about Owen, so his jokes, while there, are missing his usual smile. Martha seems particularly despondent, probably because he died rescuing her from the Pharm, and steals a kiss from Jack (hey, everybody else has done it, or so she thinks) before leaving. This episode, like Reset, tried to make us believe she might stay, but her arc is finally over. Tosh gets a dose of raw honesty from Owen who probably pegs her pathetic affection for him correctly, but she's undeterred. Probably should stop telling him she loves him on open coms though. Especially if she's meant to always be "professional". Gwen is mostly sidelined, but then, she gets a spotlight in the next episode. And there's Ianto, whose gloomy pep talk was, I think, one of his better and more understated moments.

VERSIONS: The DVD includes two deleted scenes. One has Gwen talk about her wedding with Martha. The other is the full version of Mr. Parker's scene - he discusses his atheism, struggles to remember old songs, and at Owen's prompting, talks about his wife. It goes on for quite a bit (10 minutes), and it was already pretty long.

REWATCHABILITY: Medium-High - It's too slow at times for a perfect score, but it does deliver on its exploration of a unique condition and doesn't flinch from its hard truths while still containing a positive message.
Doctor Who Torchwood

Madeley said…
I didn't think Lidster wrote the Sherlock show- isn't Stephen Thompson the only other writer apart from Gatiss and Moffat? He did write the "Master" audio drama though, which is brill.
January 17, 2014 at 10:11 AM