Doctor Who #788: Something Borrowed

January 18, 2014
"That's the kind of daughter every mother must dream of. Cool as ice, packing an automatic." 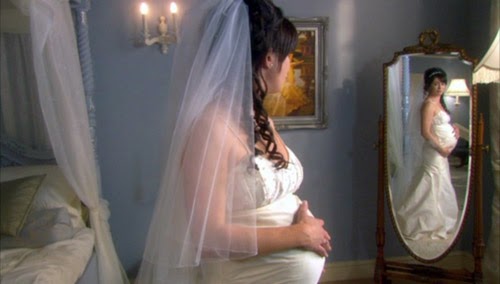 IN THIS ONE... Gwen gets married with an alien baby in her tummy.

REVIEW: Torchwood's wedding episode is, of course, a black comedy that nevertheless manages to be sweet and romantic. A shapeshifting alien impregnates Gwen with a bite, next morning she's got a huge egg in her womb and the female alien is looking to rip it out of her on her wedding day. That's about it in a nutshell and all the alien stuff has a slightly sped up feel that make them more monstrous and vicious. The real focus of the episode is Gwen's obstinate reaction - she will NOT postpone this wedding. Maybe she isn't thinking straight - the lie they tell their parents at first hasn't been thought through, like, AT ALL - but her love for Rhys is one that will brook no delay. And he gets to be there for her too. Even though there are Torchwood operatives running around everywhere, he's the one to use the Singularity Scalpel (I like that they're using the toolbox we know they to have) to save Gwen. Fun bit when he charges the alien with a chainsaw too, even if that proves useless, and even though his mother is played as a nasty in-law (both mothers are actually quite catty, while the dads are either silently suffering or calm and understanding), Rhys still defends her honor, punching Jack in the face for calling his mom a bad name. If someone in the audience didn't previously believe Rhys was in Gwen's league, he proves it here.

And there's plenty more comedy besides. Gwen's girls thinking they must of have been more drunk than they thought for not noticing Gwen's pregnancy on their hen night. The awkward "abortion" talk. Rhys' friends hitting on an aggravated Toshiko. The parents having a go. Gwen blasting at the alien through her bouquet. And there are sweet moments as well. Torchwood getting Gwen a new dress. Toshiko's invitation to Owen. The dancing. Obviously, the whole guest list has to get retconned (glossing over the fact one of Rhys' blokey friends got killed, oops). I hope it's a special kind of retcon that makes them remember the wedding, just without the alien/pregnancy stuff. Jack does offer the wedded couple some; I can't imagine he'd want them to forget their own wedding. Or maybe he would.

My one problem with Something Borrowed is the same thing I hate about this season - the inferred Jack/Gwen relationship. I still find it absurd that suddenly, and without anything really supporting the idea in Series 1, and despite them each being in a solid relationship, Gwen and Jack would be "in love". Yes, it does make a couple of gags work, like Jack's rant about people getting married in the country hiding second thoughts, or the fact that he's the one to stop the wedding or forever hold his peace. HOWEVER, it really bugs me that Gwen seems to be waiting for Jack to admit he loves her as if that would make her leave Rhys, that she almost kisses him (it's the alien, but her end of it is real), and that the production team seems to think we need Jack to give her permission to marry Rhys. This is the same Captain Jack that's been telling Gwen to invest in her relationship since the beginning! Can't Rhys' amusing jealousy be all in his head, based on misunderstanding and/or all the time Torchwood steals Gwen away from him? Do we need it to be based in fact? I say no.

REWATCHABILITY: Medium-High - Despite my irritation with the Jack/Gwen thing, this is still a fun, sweet and amusing episode.
Torchwood