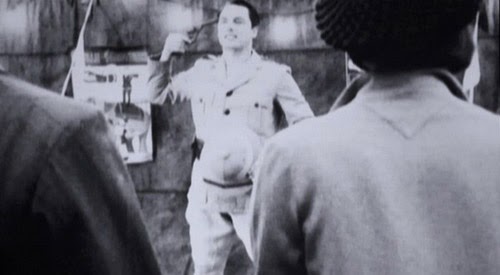 IN THIS ONE... Evil soul-sucking carnies escape from an old film to haunt Cardiff.

REVIEW: From Out of the Rain is wonderfully atmospheric, lush in its use of shadows, rain rain and interesting locations like that disused public pool. In its cinematography, design and music, it evokes exactly what its monsters are about - nostalgia for a forgotten time, but also suspicion. There is something creepy and corrupted about the Night Travellers. They represent a lost tradition, but one might ask if our world is better off without freak shows and carnival folk riding into town. (Not to slag on today's circus performers, you understand, but the traveling shows described did have their share of con men and criminals.) Director Jonathan Fox Bassett goes the extra mile producing authentic-looking silent footage and then introducing elements of film noir in the present-day scenes as well. The episode has a melancholy haunted feel, and longs for things lost while simultaneously telling us to be careful what we wish for. (It was hard not to see an element of the quest for lost Doctor Who episodes in all this, but I don't think it was intended, not unless the author thinks those episodes are better lost forever. Well, fan reaction to, say, Tomb of the Cybermen when it was found, might approve this sentiment. I would not.)

So I can definitely appreciate what the show is trying to do, but I still find myself a little bored by it. As with Peter J. Hammond's other work, more Sapphire & Steel than Torchwood's Small Worlds (which all share common ideas of children taken or under threat from creatures that live in stories/pictures/films), a lot of this is highly lyrical and unexplainable. I'm not too frustrated by that, though it's at odds with most of Torchwood, or indeed the Whoniverse. However, it's also overly explained. That is to say, the characters puzzle out what's happening and how to stop it quite a bit, and there is a LOT of repetition. Things said and said again, not always with other words; people recounting a scene we saw with our own eyes; and so on. And yet, a lot of what we see or hear about remains unexplained and unexplainable. The dark storage where victims' souls are. Toshiko detecting the sea in the middle of town. These are things that aren't set up or explored well enough for them to make sense even within the rules of this dark fairy tale. I'll also take exception with the awkwardly introduced but crucial clue handed to Torchwood by a nurse's fortuitous knowledge.

While it works as a one-off, albeit a slowly-paced one, you could just as easily skip it and not feel like you've lost something. The episode just doesn't introduce anything new in any of the characters' lived. There are some good jokes here and there, and the story alludes to Ianto's relationship to his father without really telling us anything about it. (Since the episode presents a difficult father/son relationship in the Electro theater owners, it might have made an interesting and tighter focus for the story.) A second monster in a row rejects Owen (three total if we count the Weevils), so nothing new there. Captain Jack once went undercover in a circus to try and find the Night Travellers, so his footage appears among their clips. A confusing element and the only reason Jack won't say Torchwood sent him is because they don't want to spoil his bit in Fragments. It's confusing for no reason. Otherwise, some jokes, but too few and the episodes comes off as heavy. It doesn't help that only one victim survives, all smiles, but the next scene would show the little boy finding out his entire family's dead. A Pyrrhic victory, especially since the coda has the Travellers survive (as if we'd ever see them again).

VERSIONS: The DVD has a deleted scene with the Ghostmaker fondling a clown's hair. Uhm...

REWATCHABILITY: Medium - Despite it lyricism and visual beauty, I admit to finding From Out of the Rain slow and repetitive. Still not a bad stand-alone story, but I needed more subplots instead of padding.
Torchwood