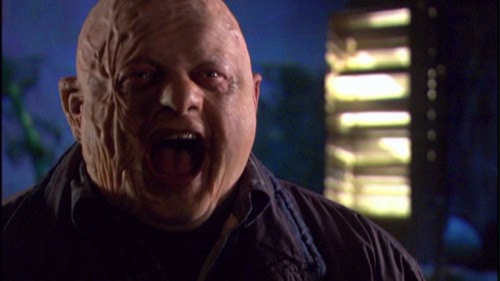 IN THIS ONE... Missing persons cases pile up; turns out Jack is secretly running a home for the Rift-affected.

REVIEW: If From Out of the Rain was lacking in subplots, that's because they had all run to Adrift to hide. When I think of Series 2, these two episodes battle it out for which one I'll forget. And yet, Adrift takes us back to the pilot in many ways, with Gwen once again there to remind Jack about the human factor and empathy, though this time she's grown hard as well and needs her own reminder in the dual form of PC Andy and beloved husband Rhys. So what stands out is Gwen getting back to police work, talking to victims, and interacting with the "human" characters in her life. Except it's a little more difficult now because she's changed and become part of Torchwood's world. Andy is perpetually angry at her and Rhys calls her on her bull in some very true to life rows about whether or not it makes sense for her to them to have kids. As usual, Eve Myles lets it all play out on her face, whether she's above her loved ones' petty concerns or taking a scolding to heart. No dialog required. Andy and Rhys are rightly cross with her, but also reach out and may just save her soul. The Hub is a more cynical place, but Gwen's had an effect, with Tosh and Ianto both proving more helpful than Owen or Jack. The change has gone both ways. And that's the episode's A-plot is really about, isn't it?

The idea that the Rift not only deposits things and creatures in Cardiff, but that it might take them away is an obvious one. So obvious, in fact, that it's been shown before. After all, wasn't Out of Time about people from the 50s taken by the Rift and deposited elsewhen? Didn't Diane leave via the Rift? (Imagine if she'd been in that asylum, hidden away from Owen. That would have been a very different episode.) The spatial element is uncertain, but it's still a two-way street. So that's a bit sloppy. How someone like Jonah is returned years after he left (from his point of view) isn't really explained either, nor just what was done to him out there. Maybe he was modified by aliens who didn't know human anatomy; certainly a 20-hour scream that loud doesn't fall within human parameters. But the biggest question mark is why Jack would keep all this secret from most of his team. Ianto knows, and by leaving Gwen a GPS device, he tells us he doesn't agree with Jack's withholding it from the others, or the idea of a secret bunker full of Rift returnees, or both. Why does he know though? Is this a recent pillow talk confession? Or did Jack need help. We can agree that the asylum on Flat Holm island is better than a cell in the Hub's vaults, no matter how much the facilities look like they're from a David Fincher film, so why make is a secret? I find no viable reason other than to create tension and drama between Jack and Gwen, make us wonder what he's hiding and whether he's doing something evil. That's neither fair to the audience or to the character.

Another reason for my ambivalence is that we're made to root for Gwen (since the pilot, really, but in this episode certainly) and yet Jack is proven right. Letting Jonah's mom Nikki in on the secret was the wrong thing to do, and more hurtful than letting her look for her son in vain. We can only hope they retconned her later, but no visit from the memory fairy (i.e. Ianto) is seen or implied. Then again, you could argue that Nikki can finally start the grieving process, move on, or even be allowed on the island during Jonah's lucid moments. She hates Gwen for showing her the truth, but we don't know how she'll feel once she's processed the information. A fine, sensitive performance by the actress by the way. If she's let down at times it's because the script, direction and music get too heavy and sentimental. Jack's solution isn't an ideal one. There's likely no ideal solution, not without a TARDIS. But the dilemma leaves me a little cold. Probably because this is really background to Gwen's story. She's the character feeling "adrift".

VERSIONS: The DVD features a couple of deleted scenes from this episode - Gwen silently apologizing to Andy from afar and Nikki's reactions when first entering the Flat Holm bunker.

REWATCHABILITY: Medium - While I can recommend Gwen's personal story, the main plot is frankly more than a little manipulative and ultimately, a little forgettable.
Torchwood