January 25, 2014
"The Ood. They came from a distant world. They voyaged across the stars. All with one purpose..." "Do you take milk and sugar?" 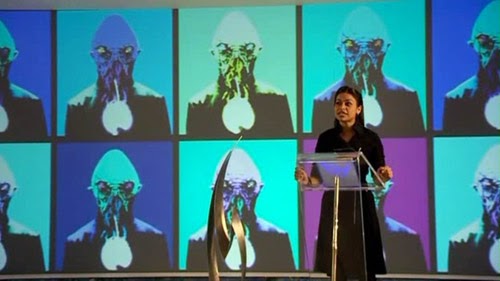 IN THIS ONE... The Doctor and Donna visit an Ood farm.

REVIEW: The Ood are really the first successful new alien race of the new series with great prosthetics, iconic voices, etc. The problem is that they're not monsters, they only LOOK like monsters, so any reuse of them as a threat would require some thought. I'm not sure "thought" is how I would describe Planet of the Ood's chief ingredient. Because they're a slave race, a rebellion is kind of an obvious tack, no problem there, but the execution is questionable. First you have the "red eye", which was used in The Satan Pit to indicate possession by the Beast. A lethal Ood here also red-eyes without supernatural help, which at first made me wonder if the Beast was merely activating some natural (and creepy) biological function, but no, Toby also red-eyed, and humans can't change the color of their irises like that. Yep, it's nonsense. That's the watch word here. The Ood inexplicably using their translator balls as weapons. A guard sends his troops away to hunt the Doctor with a giant crane-claw. A giant brain with a digestive system. A man turned into an Ood suddenly after drinking some kind of suspended DNA for years. It's all nonsense. With lots of running, shouting and shooting thrown in. Yay. My favorite.

What isn't nonsense is the episode's emotional content. Donna is particularly great, asking the questions no one's thought to ask and recognizing instinctively how the Ood's peaceful mindset would have evolved from their biological condition. And more even than in the previous episode, it's her empathy that wins us over. At first look, you'd think Donna, shouting at the world (and I do love how her first reaction to danger is irritation, not fear), would be a self-centered person. She really isn't. She sweetly comforts a dying Ood seconds after being revolted by its appearance. She questions slavery in any context, something the Doctor does not. And she can't bear to hear the Ood's sad Song of Captivity, it's too much for her. She's disappointed with the future, an echo of Suzie's "is there only filth out there" speech in Torchwood.

So it's too bad that the regulars don't actually do anything except bear witness to these "historical" events. In fact, this is the closest to a pure historical Doctor Who's had in a long time! Invented future history, yes, but the principle is the same. Think about it. The Friends of the Ood would still have freed the giant brain, Halpen would still have been turned into an Ood by Ood Sigma, the Ood would still have thrown off the chains of slavery, all without the Doctor, Donna's help. And at the end, the Doctor's awkwardly narrating what happens in epilogue, as if recalling what he read in the history books (I suppose he's plugged into the Ood's galactic telepathic field, but the scene is the same as how Hartnell ended a lot of stories). It's like a Doctor-lite story, but with the Doctor running around as the audience's proxy, talking to everyone and getting the exposition out of them, or else explaining what's happening for our benefit. I say "explaining", but the moment when he says "It all makes sense now" is the moment it STOPS making sense for me. And there's every indication that the writer (Keith Temple, in this case) was given a checklist and/or was rewritten to include as many of the "memes" Series 4 is supporting - a prophecy of endings, someone's lobotomy, asexual reproduction/transformation, the "Doctor-Donna", the bees, etc. - as possible. I used to think this was clever, but now I just find it distracting.

VERSIONS: The DVD includes deleted scenes, including a long one in which the Doctor confronts Halpen during the press conference, where the later FOTO reference (Friends of the Ood) is explained. There's also an extended version of Halpen discussing the company's Ood trouble with his staff and a but where the Doctor and Donna go out of bounds, their map of the complex in hand.

SECOND OPINIONS: My original review, Singing Songs of Donna (Among Other Things), tracks all the aforementioned memes and references.

REWATCHABILITY: Medium - It looks quite pretty (certainly love the ad it opens with) and engages on an emotional level, but the plot is filled with nonsense and keeps our heroes in a strictly observational role. That's OUR role.
Doctor Who