Doctor Who #796: The Sontaran Stratagem 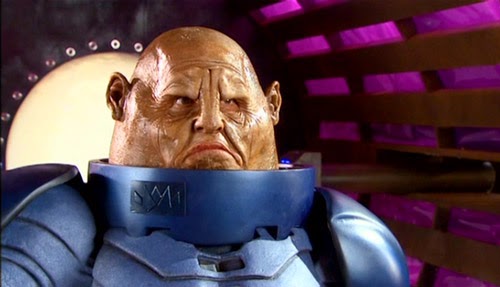 IN THIS ONE... First appearance of the new series Sontarans, Martha is with UNIT, and the mystery of ATMOS.

REVIEW: I don't want to get ahead of myself here, but because this two-parter's plot is so weak, the overall story isn't very good (Doctor Who's Helen Rayner is obviously hamstrung in a way Torchwood's Helen Rayner isn't). But I did find myself liking the first part of it quite a lot thanks to its poignant character moments and its humor. The plot though... Let's get my complaints out of the way. I'll buy that half the cars in the world have been outfitted with dangerous technology, if only because the danger was hidden in a temporal pocket and thus undetectable. I'm less enthused by the use of the "product introduced by aliens" plot so soon after Partners in Crime. This seems to happen way too often during RTD's era, perhaps because consumer angst has replaced a fear of communists or something. I'm bored with it. Martha calling the Doctor to Earth is written for the pre-credits teaser and terribly stagey. I dislike the purplish pink color scheme the Sontarans are stuck with. But that's it, really.

Thanks to Torchwood, we already knew Martha was a member of UNIT, but it's fun to see her take a leadership position in the organization. Donna's accusation that the Doctor turned her into a soldier is a bit on the nose and trying a bit hard to set up similar ideas in the series finale, but it's a fair point, which Martha addresses. Like Captain Jack, she's working on changing things from the inside. UNIT is the anti-Torchwood, however, gushing fans of the Doctor rather than dedicated to destroying him. It makes Colonel Mace a bit of a cartoon, a foil who gets rebuked for his obsessive saluting, but after a while he gives as good as he gets. The dialog is written with some wit, which brightens up the by-the-numbers invasion plot. Same with Ross Jenkins, the soldier assigned to drive the Doctor to Rattigan Academy, he's sharper than, say, the callous grunts who shoot at exhaust fumes or get owned by Staal the Undefeated, and he'd have made a great Sgt. Benton type in a new Earth exile arc. Sometimes, the wit comes at the cost of suspension of disbelief, like when the Doctor thinks Donna is leaving for good and makes this big speech. It just about works, because you could believe Donna would let him go on and on just so she could mock him, but the words and expression she uses initially are clearly meant to let us think the same thing. Still, an amusing moment. You might be tired of reading this, but Donna is great in this once again. I don't think I remember the last time a companion's skill set was used so well and so frequently (Ian and Barbara maybe?). She knows her way around an office, knows what to look for, and is finding all the important clues as a result. To steal an idea from this blog's comment section, the companion experience is the ultimate temp job, and Donna thrives in new settings and situations because she's used to the instability. I'm also a big fan of the Martha-Donna relationship as presented here. Martha's gotten over the Doctor and is engaged to Tom Milligan, and Donna is stubbornly unimpressed by the Doctor (it's a bit of a front to keep him grounded, but rooted in the reality of their friendship and thus, equal footing), which annoys the show-off that is the 10th Doctor. As a recent companion, Martha does have some good advice for Donna, advice obviously inspired by the realization she made in "42", and the overall arc of her series, that having kept her family in the dark about her whereabouts led to problems. It's a poignant moment because we haven't had time to forget where this is coming from, and Donna takes it to heart, going back to see Wilf (Cribbins always gives a touching performance) and Sylvia.

But what about the return of the Sontarans? Well, for me, there'll (apparently) never be a better Sontaran than the original in The Time Warrior. The make-up went downhill after that, and so did the stories. The Sontaran Stratagem feature more modern prosthetics and are a good alternative to the original look, though I miss the alien touches like the tongue breathing. They could stand to be a little squatter - their armor makes them look rather thin as well as short - but I don't think that aspect of their appearance has ever been so well realized before. Putting them next to the tallest possible UNIT soldiers really helps. We see the golf ball ships again, but they're part of a larger vessel, which is all very cool. I can't fault the pure CG shots in Series 4, they've been great. The Sontarans make great straight men, deadly serious about war, as if the Klingons had a Vulcan approach, comedy that would be exploited later with Strax, played by Dan Starkey here playing General Staal's second-in-command, Skorr (yay, clones race!). The human villain of the piece, the spoiled, mercurial Luke Rattigan, is more one-dimensional, but as with Staal, is a good character for the Doctor to banter with. The Doctor gets pedantic with Luke to make him show his hand, and then defeats Staal with a well-bounced tennis ball, both very apt Doctor Who "weapons". It really is all fun and games until the plot takes over in The Poison Sky.

SECOND OPINIONS: My original review of the two-parter, called Sontar-a! because I obviously didn't have access to subtitles at the time, talks a lot more about Part 1 than it does Part 2, so I include it here.

THEORIES: One of the recurring memes I didn't touch on in those original reviews, but that I keep noticing now, is a visual reference to Turn Left. In that episode, we'll see a distinctive shot from above of Donna's car either turning right or turning left (and left is the right answer). In this episode, there's a similar angle on Donna being dropped off on her street, her house down a ways to the left. When Ross and the Doctor are driving back from the Academy, their ATMOS GPS tells them to go right when they need to go left, trying to kill them. Annnnd there was this shot I didn't mention in Partners in Crime, while the Doctor and Donna keep missing each other, where we see them on opposite streets from above, and Donna would see him if only she took a left turn. None of this can be coincidence, can it?

REWATCHABILITY: Medium-High - To my surprise, a very enjoyable episode thanks to some great character moments and humor (love the UNIT dating joke). Not so keen on bog-standard plot elements, and they're about to take over.
Doctor Who

Anonymous said…
"Well, for me, there'll (apparently) never be a better Sontaran than the original in The Time Warrior."