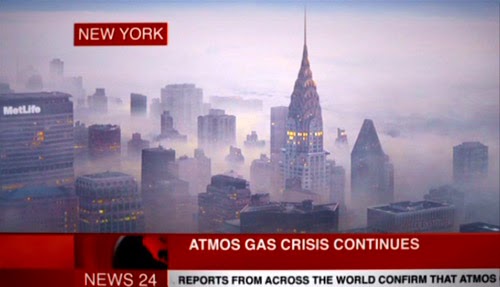 IN THIS ONE... The Sontaran poison the sky, the Doctor burns it.

REVIEW: Knowing the episode wasn't very good, I tried very hard to find things I liked in it. As with Part 1 of this story, it's the small character moments that tend to shine. Except there are fewer of them to make room for the plot, Martha is an evil clone for most of it and thus gets fewer moments, and what's there is often redundant and doesn't tell us anything new. But we still get a reference to the Brig. An "are you my mummy?" joke. Sylvia showing some of that practicality Donna has. Donna refusing to get sentimental when she gets her TARDIS key. Wilf being Wilf and Donna having a hard time leaving him again. Donna fighting aliens with a small rubber mallet. Skorr's "wonderful" death in battle. The Doctor so quickly disarming Luke and throwing away his gun. Donna slapping the Doctor before clinging to him, relieved he hasn't died. But even in this department, there are clunkers. Martha's clone going all Blade Runner with her "all that life" line. Colonel Mace and his subaltern sharing a stagey kiss when the world is saved. These don't really work.

Like the plot, frankly. The whole idea of the Sontarans creating a cloning farm out of the Earth is fine, and for once, we can believe the effects would be up to the challenge of showing a clone army (there are lots here already), and smoking up the place in "clonefeed", that works too. What doesn't work is the solution to this problem. The Doctor makes a machine that might as well be MAGIC. It shoots a ball of fire into the sky, which starts a fiery chain reaction that covers the entire world in flames, yet leaves no after-effect. It apparently burns just the Sontaran fumes and nothing else, leaving clear blue skies. Despite the fact that the fumes are mostly ground based, which would mean the fire should have spread lower and at least singed the lawns. And covering the whole planet despite the fact there can't possibly have been a whole lot over the oceans. No collateral damage from burning the atmosphere up. MAGIC. The same gadget, when used on the air inside the Sontaran vessel, obliterates the ship, which is just as ridiculous. Burn the air inside a metal structure should make it explode and disintegrate. But before we get to that, we get the least believable sequence in the episode (if not Series 4). The Doctor volunteers to sacrifice himself by taking the fire-gun to the warship himself. The companions are giving him better ideas (like put the thing on delay) and I could add one more (if you want to "give them a chance", how about calling them somehow?), but his goodbye scene would be manipulative if it was even remotely possible he could die here. It isn't. Even worse is that Luke Rattigan, a complete sociopath who sold the human race out so he could experiment with eugenics on another planet with less than a couple dozen people (who, at least, prove not to be sociopaths themselves), has a change of heart and sacrifices himself in the Doctor's stead. I'm sorry, no. It might have been bolder for the show to have Martha die for the Doctor here, but it would at least have made sense. Another pass at the script, and the Martha clone could have been the one. Luke? Nope. It was him because he was the only disposable character in the room, and that's bad writing.

Less integral to the plot, but just as ill-considered, is the death of Ross Jenkins. The kid deserved a recurring role, not a meaningless death just to make the Doctor angry. Like it was needed?! The Sontarans massacre UNIT and Mace still doesn't listen to the Doctor, which at one point, just makes him look foolish. When the Valiant arrives, which is treated like this big punch-the-air moment, it just reverses the massacre so that UNIT can kill all the Sontarans in much the same way. Why is the Doctor happy about this exactly? It feels wrong. And the questions. Why is Staal so contemptuous of females when the Sontarans don't have males either? What's the bit about the Martha clone being turned into a triple agent? Doesn't quite make sense. I think you get the picture: It's not a good script.

REWATCHABILITY: Medium-Low - There are a number of nice little moments, but the emphasis is definitely on "little". The plot runs on complete nonsense, which unforgivably extends to the Doctor being out of character.
Doctor Who

Anonymous said…
The only way I can make sense of the Doctor being so ready to sacrifice himself is that it was the ol' Survivor's Guilt rearing its head again, as once more he prepared to destroy a hostile alien armada. But when you have to go fishing for motivations to justify bizarre character behavior, it's probably bad writing. That, or "Hamlet". (Ba-zing!)
January 27, 2014 at 7:48 AM

Anonymous said…
Apologies, I had no choice, none whatsoever. (Though you will notice that I said it's bad writing OR "Hamlet", so "Hamlet" isn't a form of bad writing.)

As far as "Hamlet" goes, my opinions are no doubt cartoonishly simplistic compared to yours, but my take on it is, Shakespeare got it right -- if Hamlet is behaving in erratic fashion in parts, it's because he's become somewhat unmoored from a sense that there is a basic order and justice to things. It's not a character making peculiar choices to prop up a bad plot, it's a character making the sort of choices that just might be natural under the circumstances.
January 27, 2014 at 9:21 AM