Doctor Who #798: The Doctor's Daughter 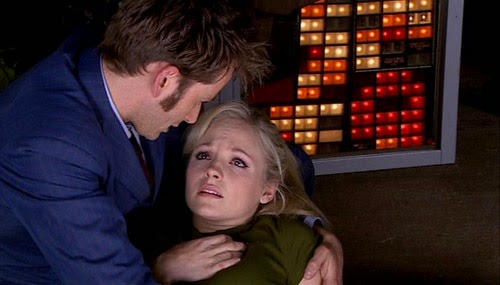 IN THIS ONE... On a world of clones at war, the Doctor spawns a daughter.

REVIEW: Bit of a tear-jerker this one, though watching it repeatedly takes away from the effect. See, we're almost at the point where the season gets really good, but only almost. The plots still have some big problems that get progressively harder to bear, even though the character stuff might work quite well. The theme of asexual reproduction is with us once again (that's EVERY episode this season to this point), and it dovetails into one of the season's other themes, that of the Doctor turning people into soldiers/weapons. While this leads up to Davros' speech in the finale, every time it comes up before, it's actually to show how the Doctor DOESN'T. Martha joined UNIT, yes, but means to change things from the inside, and in this episode, while I'd have rather had her WITH the Doctor and Donna, she plays his role on the Hath side of the Messaline's conflict, an ambassador for the human race, a friend a Hath is willing to die for, and a general peacemaker. Similarly, the humans may have created a soldier, Jenny, from the Doctor's DNA, but he teaches her a better way, and it ultimately inspires her to follow in his footsteps, aboard a different roundel-equipped craft. Evil must be fought, to paraphrase the second Doctor, but the methods are important. The Doctor "never would" except he has, in various ways, but those ways matter, they're not indiscriminate or gratuitous.

The Time War looms large in this episode, as Jenny reminds the Doctor of his people (she's at least Gallifreyan if not a Time Lady) and of his dead family especially (so Susan definitely died in the conflict, it would seem). Why he rejects her is a complex question, and Tennant manages to give one of his best performances showing that very complexity. There are the petty justifications, like the fact she was created against his will and is not of his culture, but these are quickly dispelled by Donna-as-family-therapist. Closer to the truth is his contempt of her and her war, which fall well short of his people and theirs. Truer still is the notion that she reminds him of that part of himself that WAS a warrior, and that's the thing he can't bear. It's quite nice to see him warm to her, be proud of her, be willing to bring her along. And heartbreaking for her to die in his arms after sacrificing her life for him (and yet somehow just a touch less harrowing than Martha's mirrored loss of her Hath friend on the planet surface). We see something of the Doctor in Jenny too, of course, not that it's immediately apparent Georgia Moffatt is Peter Davison's real-life daughter (and now Tennant's real-life wife, how's that for insane Doctor Who connection). She's got his enthusiasm and ability not to take danger seriously, and that's what charms us. It's really too bad she never made another appearance; the episode seems to promise we'd catch up to her some day.

But while the four main characters are enjoyable - and the Hath sort of endearing - the plot is complete bollocks. First of all, there's way too much shooting and running around disused factory tunnels. That kind of action tends to bore me quickly. Then, there's the shocking twist that all these generations of clones at war since before anyone can remember only really started their conflict a week ago. That just doesn't work, guys. The idea that soldiers on both sides are numerous and being killed continuously, requiring more troops to be created, is undersold, but that's not the main problem. The main problem is General Cobb who, aside from being a one-dimensional antagonist (having a programmed motivation will do that), talks of a pacifist outbreak "three generations ago", which I guess means at most the day before, and so is old enough to remember several generations. It should be clear TO HIM that the conflict hasn't actually raged for decades or centuries. Furthermore, he's the only old person in the entire story, so... was he created that way? Or are the "generated anomalies" (what does that even MEAN?) affected by accelerated decrepitude? What, is Jenny old and dead before she leaves the system? So fine, they wanted to give Donna another super-temp moment, but she could have been "good with numbers" without this whopper of a twist. You're already asking us to accept people with simple firearms who have technology that creates people out of thin air in seconds and terraforms an entire planet in less than a minute, yo.

VERSIONS: The deleted scenes on the DVD include an interesting conversation between Jenny and Donna about the Goddess the humans worship, linking the "breath of life" to Jenny's resurrection and her "sigh" to the Doctor's disappointment in his daughter. They should have kept it in. A longer rousing speech from Cobb wasn't as missed.

SECOND OPINIONS: My original review, G.I. Jenny, talks at length about the season's recurring themes in relation to this episode.

REWATCHABILITY: Medium-High - Jenny is a charmer, and the three other leads give good performances. Once again, I'm forced to express disappointment at the plot itself.
Doctor Who

Madeley said…
I wonder if Jenny will turn up again, because if I recall it was Steven Moffat who convinced RTD that she should live at the end, as she died for good in the first draft.
January 28, 2014 at 9:08 AM

Siskoid said…
Moffat plays too long a game for my tastes (again) if that's the case.

But I'd love to catch up with her, and since she's a Time Lord-ish, she could be involved in the return of Gallifrey storyline.
January 28, 2014 at 9:15 AM

Madeley said…
It's mental how far ahead some of this is planned. I happened to watch The End of Time again on the weekend, and I was struck by the "the Doctor is in possession of the Moment" comment, in light of the 50th.
January 28, 2014 at 9:20 AM

LiamKav said…
I don't think "planned" was the right word there. More likely RTD just stuck in a nice sounding phrase, and then Moffat picked up on it later. TVTropes uses the phrase "sequel hooks", but I don't think "The Moment" even counts as that. More a case of "Well, if I can reuse a phrase to make everything tie together better, then I will."
January 28, 2014 at 9:36 AM

Siskoid said…
I think so too. I was very impressed with how Day of the Doctor used (and subverted) continuity so well, and I hadn't even realized this was part of Time War lore.
January 28, 2014 at 9:38 AM

Anonymous said…
I always wanted "Time Crash" to consist of David Tennant doing his fast-talking thing while Peter Davison just glares at him, and when Peter Davison speaks at long last, he simply says "Stop sleeping with my daughter!"
January 28, 2014 at 9:56 AM

Toby'c said…
"First of all, there's way too much shooting and running around disused factory tunnels."
I'm slightly disappointed you didn't use the words "outrageous amount" in there somewhere.
January 29, 2014 at 6:44 AM

Andrew Gilbertson said…
I was going to get on here to rant about 'a man who never would' (which, along with "You have a gun, that makes you the bad guy" and the "a new man saunters away" completes my Nerd-rage-anti-RTD-retcon-Trifecta... the stuff that makes me see red and want to throw things through my monitor (or prefereably, RTD's monitor. ;-) ). But your look at it, though brief, is one I hadn't expected.

And I do suspect that in the end, the arrogant git (Seriously- "by the way, base your society off me", he throws in there as a given, as if there's no way they wouldn't structure their society around whatever words come out of his mouth...!) means 'a man who never would kill someone in cold blood, or for revenge.'*

However, a lot of fandom have taken that to mean 'a man who never would kill' or 'a man who never would kill with a gun,' part of the RTD revisionist/pacifist banner... practically a figurehead for the movement. And really, those sentiments are so untrue it's not even funny; Doctor's that didn't kill with a gun are... 1, 7, 8, and then the New Series guys? There's a pretty big gap there during which Ogrons, Sontarrans, Ice Warriors, Cybermen, and more were blown away with a firearm... and a Doctor that's never killed actively (as opposed to allowing it to happen by inaction?)... I don't think one exists, save maybe Mcgann and Eccleston, who had no time to.

...The point behind all this being? I realize that I don't hate the 'man who never would speech' (an amazing music cue, for one thing), because the point it tries to make, which you make, is actually an important and poignant distinction.

I just hate how fandom, not observing that nuance, has taken it, what they bandy it about to mean, and how much that plays into the obnoxious new series retcon vision of the Doctor that New Who-only fans buy into... one that, in this case at least, I don't think RTD was trying to peddle here.


*Which is still bull. He was only interrupted from doing that to Davros by circumstances as the 5th Doc, and, I maintain, totally DID do that to Kamelion in a cold-blooded act of murder that served as part of his Waters of Mars moment, which goes into a much longer rant about how RTD completely ripped off the 5th Doctor's fall-and-redemption-sacrificing-himself-for-one-person arc from the 5th Doc stories. :-)
August 12, 2014 at 2:31 PM