Doctor Who #799: The Unicorn and the Wasp 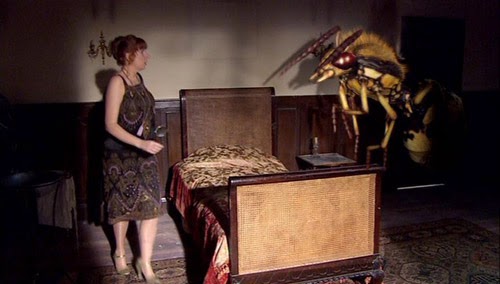 IN THIS ONE... The Doctor meets Agatha Christie and helps her solve a mystery about a giant wasp.

REVIEW: The best Doctor Who romp in a long time, this episode goes rather far into comedy and parody, but stays grounded in a reality thanks to a real historcal mystery we want to see solved (Agatha Christie's amnesia) and a thoughtful performance from Fenella Woolgar as Agatha herself. On the surface of it, Gareth Roberts is attempting to do the same thing he did in The Shakespeare Code - the Doctor meets a brilliant writer who helps him stop an alien threat, while the script lays in as many references to the writer's material as possible, usually as affectionate mockery. I objected to his portrayal of Shakespeare, but loved his Agatha Christie. She comes across as more real because she doesn't believe in her own genius. She needs to be inspired by the Doctor and doesn't think of herself as anything special even though the force of her personality is enough to put the Doctor in his place. We see many facets of the character, not just the clever author. The quick judge of character, the budding feminist, the self-sacrificing heroine, the scorned and hurt wife, the pragmatic woman who knows and accepts great literature is beyond her. Shakespeare was a smug caricature in comparison.

Donna is obviously having a blast, eating popcorn (well, the 1920s equivalent) during the classic drawing room scene and putting on Belgian or posh accents depending on the situation. It's a scene that has fun in other ways, as all sorts of secrets are revealed (but not the son's obvious but at the time shameful homosexuality because he's dead by then), and pleasantly, all the clues were there for the audience to pick up, anomalies to frown at, to puzzle out before they're said out loud. It's a series of fake-outs re: the identity of the murderer. Other scenes go much further into comedy, some might even say too far (but I wouldn't). Professor Peach in the library with the lead pipe is a crazy overt reference to Clue, for example. And I do love the comedy flashbacks during the Doctor's interrogation of the suspects, with several gags on the idea (including the Doctor sitting in the chair and having an insane flashback of his own, which I like to think is part of the same adventure we barely saw in Blink - they missed a trick by not including more of his archery adventures over what was left of Tennnat's tenure), but my favorite is Curbishley's flashback inside a flashback, and who better to play the rambling but endearing old fool than Christopher Benjamin, Henry Gordon Jago himself!

It's all so much fun and so witty, that I can easily forgive the episode's weaknesses. Chief among these is the Doctor shunting poison out into his shoe - oh sorry, I mean vomiting it out into a black cloud by eating disgusting things and kissing Donna (because every companion MUST kiss Tennant, it's a rule, groan). These fortuitous Time Lord powers are as silly as they are cheats. I kind of wish Donna hadn't called attention to the idea that the alien's plot is absurdly, like one of Agatha's, but that's at least part of the plot. It's just a Doctor Who trope, no need to explain any more than the idea that none of the servants are considered suspects (this ain't Downton Abbey). And Golightly (now THERE'S a name that gives away the fact he can fly) starting to buzz before he changes into a giant wasp borders on the silly, unless his lips morph into his wings. But these are mild grievances given the overall quality of the episode.

VERSIONS: There are several deleted scenes (and in fact, an alternate ending) on the DVD. The shorter bits show the Doctor calling everyone to dinner and getting into the TARDIS to analyze the Vespiform gunk. Much more importantly, the episode would have have bookends with an older Agatha on her death bed, wondering about those missing memories, then getting a visit from the Doctor and Donna, to show her the Year 5 Billion edition of her book. Personally, I don't think that version works. The dialog and acting are unconvincing, quite aside from RTD's stated reason, that it turned everything into a flashback devoid of drama.

SECOND OPINIONS: My original review, Doctor Who: Any Genre Will Do, is mostly annotations and a defense of comedy in the program.

REWATCHABILITY: Medium-High - A whole lot of fun, this is a great one-off to show potential recruits to the Whovian cause.
Doctor Who

Toby'c said…
A strong contender for my favourite post-revival episode, which thanks to my rating system puts it above nearly every classic story as well.

Madeley said…
I didn't think much of the Shakespeare Code, and I thought this episode was mediocre first time I saw it, but in retrospect I quite like it. I think the humour's well done and the chemistry between Tennant and Tate is brilliant. It's no surprise that they became friends in real life, and still occasionally turn up as a double act on radio shows and tv programmes over here (they did a panel quiz show once where much of the hilarity stemmed from the fact that Tennant obviously has a frightening fanboy-level of knowledge about the show, while Tate was on the show for years despite obviously not understanding a thing that was going on around her.)

Anonymous said…
"Never Mind the Buzzcocks" with Tennant and Tate: