January 24, 2014
On the occasion of completing reviews on Torchwood's second series, I should like to re-imagine it as a role-playing game campaign using Cubicle 7's Doctor Who RPG. (Go back one, to Sarah Jane Adventures Series 1.) 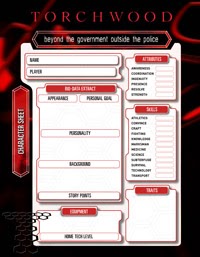 Chris had a lot of ideas for his second series with his Torchwood group, but also wanted to continue to let his players dictate their subplots, and those subplots to dictate his main plots from time to time. He wanted to be reactive to what the PCs were up to, although he also introduced his own elements into their personal stories, like Gwen's fiancé Rhys finding out about Torchwood, and Jack having a lost brother. He also wants to explore Torchwood's history a little bit more. Finally, he's invited Freema to join the group for a few sessions, since her Martha had played with John's Jack for a bit in the main Doctor Who campaign.

The Players
-Fresh off some games with Russell in the campaign that spawned Captain Jack, John wants his character to have a relationship with another, but he can't decide if it should be Gwen or Ianto. He'll initiate romantic subplots with both and see where it leads him.
-Eve decided something important during the gaming hiatus - that Gwen was now engaged to NPC Rhys. That kind of gives Captain Jack his answer, but it also inspires the GM to write a wedding scenario.
-Gareth's added points in Ianto's skills required to become more of a field agent and it does him a world of good. Not only does he feel more useful, but also free to crack jokes and make the other players laugh.
-Inspired by other players' romantic subplots, Naoko hopes to take Toshiko's into overdrive, addressing it often so that she can eventually ask Owen out.
-Burn's open to allowing Owen to drop his guard a little bit, wanting to mature his character, though he doesn't want to deny Naoko Story Points by actually letting her character be happy. Midway through the series, Owen is killed, and the group's reaction was quite interesting (see below).
-Just as John took Captain Jack (back) to the Doctor Who campaign for three sessions, so does Freema take her character, Martha Jones, to Jack's Torchwood campaign for three sessions. After everything the character went through, it's decided she's now competent enough to be a big deal over at UNIT and her stats are modified accordingly.

Kiss Kiss, Bang Bang. The players start in medias res so that the missing Captain Jack can return at some badass moment. That done, the GM introduces a dangerous new villain, another time agent who was once Jack's partner and lover, now calling himself Captain John Hart. The group has a great time and lots of laughs, happy to be playing together again and eager to showcase the tweaks made to their characters. 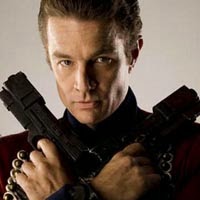 Sleeper. Chris' scenario involves an alien invasion spearheaded by sleeper agents, seemingly normal people who are actually terrorist weapons. After the slightly goofy first session, the group is getting down to its normal brand of dark human drama and suspenseful action.

To the Last Man. Playing on Toshiko's loneliness, the GM introduces a young WWI soldier taken out of deep freeze once a year until needed to close off a time loop, and assigned to Naoko's character for romantic purposes. Chris' play aids, old letters and pictures left by WWI Torchwood operatives, add a lot to the session.

Meat. The GM's plot about a giant, perpetually regenerating meat monster isn't his strongest, but it's the best he could come up with to drag Gwen's fiancé Rhys - a lorry driver - into the world of Torchwood. Chris delights in having him show up at the wrong place at the wrong time, especially since half the group actually starts to suspect him of something. NPCs... you never really know which side they're on!

Adam. Chris has an interesting idea - an alien that feeds and corrupts memory. On his say-so, the players integrate personality changes "Adam" suggests, so for example, Tosh and Owen switch personalities (the players have a great time with THAT one), Gwen forgets who Rhys is, Ianto is turned into a tortured serial killer, and Jack plays out childhood memories that seed the idea of his losing his brother, a character the GM wants to use down the line. Through role-playing, the characters must convince each other of what the players already know - that Adam isn't meant to be there and that their memories have been changed. It was a bold move that could have had huge consequences on the continuing campaign, but the players' retcon solution managed to create a clean exit from this alternate reality. (If they hadn't been able to fix things, the GM planned to have Martha Jones fix it when Freema came on next.) 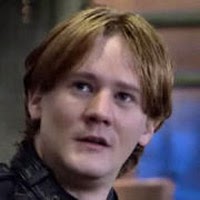 Reset. Guest player! Martha Jones becomes UNIT liaison and the GM has prepared a medical mystery scenario to give her something to do despite the fact that Torchwood already has a doctor. It's fun and easy, and everyone enjoys having Freema at the table, even Burn who might otherwise have felt jealous about a similar character stealing his thunder, but the big surprise comes at the end. The dice shouldn't have rolled that way, but randomness being what it is, Owen is shot and killed rescuing Martha from the clutches of an amoral pharmacological research center. Where do you go from there? Someone mentions the Resurrection Gauntlet and neurons spark in Chris' head. He pushes back and tweaks the scenarios he had ready for the next couple of weeks - always best to stay flexible - and meets with Burn in between sessions to hash out a crazy plan.

Dead Man Walking. John comes to the session early and plays a side-mission to get the second Resurrection Gauntlet so he can raise Owen from the dead. He and Burn had discussed what unlife would be for the character and developed a unique version of the Immortal Trait to spring on the unwary team. It was also the perfect moment to feature Death itself as an interdimensional demon thing released by Owen's return as a monster.

A Day in the Death. The group took an entire session to work out what Owen's new state of being was like and what it meant for the character, mostly acting as support team to Owen's rehabilitation and solo mission. The GM had a siege on an alien artifact collector's house planned all along, but adapted the details to suit Owen's arc better. Let's just say "hope" wasn't the MacGuffin originally. With this session, Freema's stint as guest player ended, though she hoped to play with this group again at some point.

Something Borrowed. Oh that wedding episode! Chris pulls a fast one on Gwen and impregnates her with an alien egg on the eve of her big day. All the wedding tropes are there and subverted, and it's a grand old time that almost make the group wish Rhys had been controlled by a player (though it prevents the NPC from ever becoming too heroic or successful). 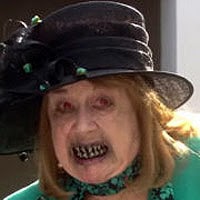 From Out of the Rain. The GM introduces the Night Travellers, a circus sideshow that collects souls and has recently escaped from the piece of old film where they had been captives. He dims the lights, puts the sound of rain on a loop, and projects old film clips in the public domain he's found. It's creepy, especially the idea that the characters on screen can then be visualized as the scenario's villains.

Adrift. So John and Chris were talking about the campaign one evening, and the subject of what the organization did with people taken and brought back by the Rift came up. John thought Torchwood might have some kind of secret home for the ones that had gone mad, so Chris jumped on the idea. What they developed together, he introduced as a mystery in this scenario that had Gwen and the others investigating a growing number of disappearances (the GM needed his NPCs to make Eve take the bait, but once she did, watch out!), with John a willing accomplice.

Fragments. To set up the return of John Hart for his finale, Chris put all the PCs but Gwen in an impossible situation involving time bombs with very very short fuses. It was all a ploy to make their lives flash before their eyes and play just how they were recruited by Torchwood. This meant more to do for Captain Jack, since he recruited all the others, but with each player allowed to set up quite a few details as their story began, it became a good example of cooperative storytelling. John wanted to role-play two moments - his induction in the organization back in the Victorian era and how in inherited the Hub. Naoko let the GM decide the circumstances and got to do a little espionage mission. Gareth had Ianto audition on his terms, but was surprised and amused to find his origin story coincided with the pterodactyl's. And Burn saw Owen's story as a trauma involving a woman he loved, followed by a need for revenge. Chris was happy to oblige.

Exit Wounds. So John Hart is back and so is Captain Jack's kid brother Gray, and both are psychopaths intent on destroying Cardiff and the Torchwood team. The GM sets up a lot of obstacles for the PCs to defeat, from Weevils, to a Hoix, to panic in the street, to a nuclear meltdown, even as the villains infiltrate their HQ. Chris goes so far with it, two PCs don't make it out alive. Owen is trapped in the nuclear reactor after a series of "No, and..." and "Yes, but..." rolls, while Toshiko is shot by Gray and takes way too much damage for the character to survive. They play their respective death scenes to the hilt, which makes them hard to walk away from. Their characters have completed their arcs, and both players surrender their sheets with a sense of accomplishment and serenity. They won't be returning, and as it would later turn out, neither would Chris as GM.

But that's a tale for some other day...
RPGs Seasons of DWAITAS Torchwood