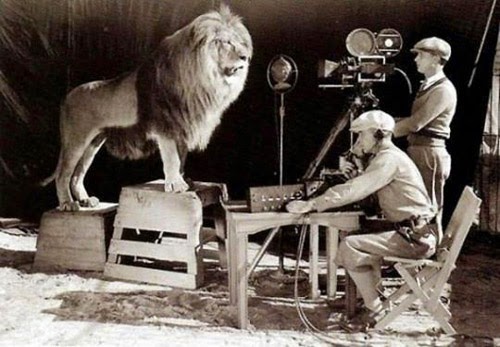 They're shooting the MGM (Metro-Goldwyn-Mayer) logo in that old picture from 1924, which may just be the best movie studio logo of them all (even if I have an affection for Hong Kong studio/distributor logos like Shaw Bros., Golden Harvest and Media Asia). Maybe I'm just waxing nostalgic because the roaring lion isn't seen much anymore. It still shows up on films that MGM had a hand in before it went bankrupt (including Skyfall and The Hobbit), but at some point, there won't be any left, and the big kitty will only live on DVD. I'm in no way a supporter of the "Hollywood system" - I'm much more prone to liking indie films - but that's still kind of sad.

LiamKav said…
I'm gonna argue for the 20th Century Fox fanfare being my favourite. The full version. Interesting fact (that lot's of people already know). When writing the music to Star Wars, John Williams purposefully asked for the full version of the fanfare, which hadn't been used in decades. He also composed the main theme in the same key as the fanfare so that it flowed together.

Y'know, I have no problem with Disney owning Star Wars. But seeing the Buena Vista intro before the Star Wars title will be weird
January 30, 2014 at 11:53 AM

Siskoid said…
It's gonna be like an Indiana Jones movie without the Paramount mountain!
January 30, 2014 at 2:37 PM