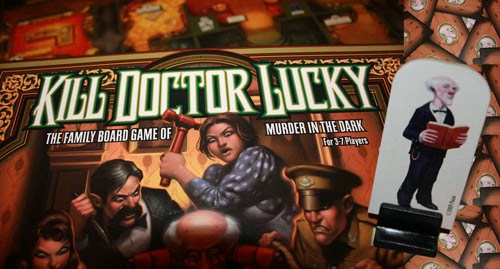 Lately we've been playing Kill Doctor Lucky quite a bit, usually to warm ourselves up at the start of some gaming night. If you don't know it, it's basically the prequel to Clue, as your characters try to get the Mr. Magoo-like Dr. Lucky in a room alone to murder him. He's got amazing luck though (as represented by Failure cards), but eventually, you'll have built up enough Spite tokens to drain all Failure cards from the game so you can finally do the deed. If only no one has you in their line of sight.

But as with any game I play, I started to think about houseruling it. After all, there must be a way to use the back stories we've given the characters to enhance the game, right? I always play the cook (and call him Gaston) and get really angry when Dr. Lucky visits the kitchen, why can't that work in my favor? Gaston and his niece the maid don't appreciate it when he's in the Servants' Quarters either. Then there's his wife, who hates him for not buying her any nice dresses, and his daughter the poisoner who just wants to inherit. Because we never play with Shamrock the dog as per the variant rules, someone always wants to be the loyal pooch so they can bite Dr. Lucky to death. There ought to be a way to put more story into the game, so try these on for size. 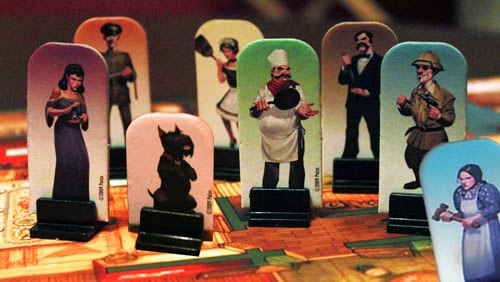 Each character in the game has a room they seem most at home in. The cook has the Kitchen. The Maid, the Servants' Quarters. The wife, the Master Bedroom. The poisonous daughter, the Dining Room. That explorer dude, the Trophy Room. The WWI German, the Armory. And if the guy in the tux is the butler, the Foyer, if a fancy guest, then perhaps the Billiards Room or something. Your back story for the characters may differ, just adapt this idea to fit your vision of Dr. Lucky's house guests. Whatever room is associated with them, pick one of the following:
-When the character attempts murder in their designated room, they get an extra Spite token.
-If they do nothing else on a turn (no cards or moves), characters can move directly to their designated room.
-Characters are +1 to the murder value of their attempts in their designated room.
Choose one that everyone adheres to during the game, or mix it up and let each player choose the one they like most. If you're using Shamrock the dog as a would-be murderer, he won't really have a room, so I suggest this one instead: Shamrock is on a leash and can lead Dr. Lucky to an early grave. If he's in the same room and moves in any direction, he can bring Dr. Lucky with him.

But I've been looking beyond the pieces included in the game itself. If you have Save Doctor Lucky (the reverse of KDL, set on the Titanic), you might have different characters (who possibly regret saving him first time 'round) and a second Dr. Lucky who could act as his evil twin, but that's not what I mean. See, I have THESE pieces sitting around my living room: 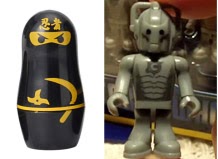 A Cyberman in Dr. Lucky's house? Why not? He might get to kill A doctor if not THE Doctor. Special power: When a single other character is in the same room with him, that character doesn't count as being line-of-sight, because MIND CONTROL YOU WILL BE LIKE UZZZZZZ. Still have to worry about open doors though. The ninja is more insidious still because he can't be seen! That's a bit over-powered, so maybe he can ignore ONE open door of his choice.

Obviously, you're not going to have the exact same mini-figs (or Russian doll ninjas) I have, but any small figure will do. 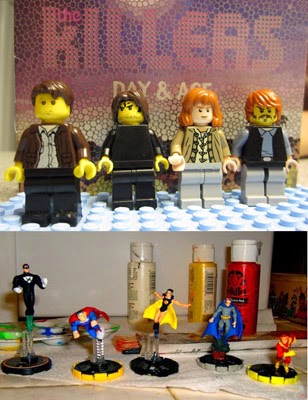 HeroClix supervillains would open the door to all sorts of crazy abilities, but Lego pieces could conceivably be... anything. Don't limit yourself. EVERYONE wants to kill Dr. Lucky. He's so annoying!
Gaming

Siskoid said…
You deserve a standing ovation for that one, but I think it would have brought a different (and then disappointed) crowd to the blog.
January 28, 2014 at 9:16 AM

Randal said…
When the heck did Kill Doctor Lucky get production values?!?!? My Cheap Ass game envelope could use an upgrade...
January 29, 2014 at 1:45 AM

Siskoid said…
Over Christmas we played a full cycle of Save Doctor Lucky, Kill Doctor Lucky and Clue.
January 29, 2014 at 8:09 AM

Brian Geers said…
As a Clix enthusiast, I absolutely love those custom CSA figures you've got pictured. The Morrison versions were okay, but I was always more a fan of the pre-Crisis versions.
January 29, 2014 at 7:45 PM

Siskoid said…
I've got a couple boxes of Clix but have never played. I use them as handy miniatures in superhero role-playing games!
January 31, 2014 at 2:14 PM