Owen and Toshiko: The Character Sheets

January 22, 2014
In the spirit of each successive series seen as a Doctor Who RPG campaign, Burn and Naoko handed in their character sheets before leaving. 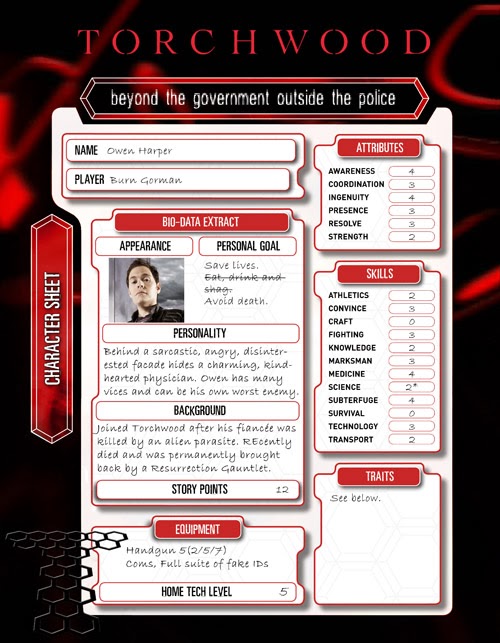 SKILLS
*Owen has a +2 Science Expertise in Alien organisms.

BAD TRAITS
Argumentative (Minor)
Eccentric/Cynical and self-destructive (Minor) - Due to past trauma, Owen can be highly sarcastic, angry or even cruel with his teammates, and tries to lose himself in his baser instincts when off the clock, indulging in irresponsible drinking and carousing
Obligation (Minor) - to Torchwood
Selfish (Minor)
Weakness: No healing (Special) - Due to his unalive nature, Owen cannot heal from physical wounds. He may still heal Attributes as normal, but the wounds remain (at the GameMaster's discretion, these may cause permanent Attribute reduction, however). For example, if Owen breaks his hand, that hand would remain broken forever.

SPECIAL TRAITS
Immortal (Special) - Owen is not alive per se, but his body is animated through some unknown power. It's not simply a matter of not needing to breathe or eat; he literally cannot digest food, nor can he use his breath in any meaningful way (like CPR). He has no heartbeat, no blood flow, no body heat, and does not sleep. He needs to work out regularly so his body does not atrophy. See Weakness for more.
Special: King of the Weevils - Weevils are afraid of Owen and will never try to attack him. The fact that he is not alive means any creature that would normally eat human flesh will likely leave him alone.

FAVORITE METHOD FOR ACCUMULATING STORY POINTS
Burn's destructive behavior is his principal Story Point engine, showing up to work with a hangover, for example, shirking off important work, and causing conflict in the workplace. After his death, he would get a Point every time he'd remind the GM of some useful bodily function he no longer had access to.

As for Naoko's sheet: 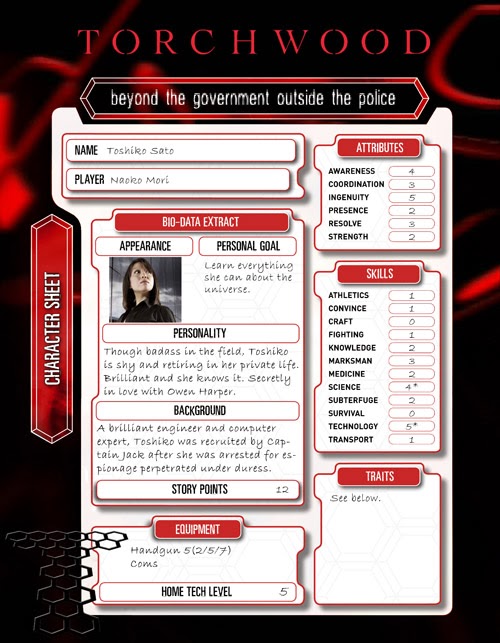 BAD TRAITS
Eccentric/Lonely and Shy (Minor) - Tosh is often motivated by her crushing loneliness, losing herself in her work, and leaving her vulnerable to romantic entanglements, both good and bad.
Insatiable Curiosity (Minor)
Obligation (Major) - to Torchwood
Obsession (Minor) - Tosh is secretly in love with Owen Harper

FAVORITE METHOD FOR ACCUMULATING STORY POINTS
Toshiko's awkwardness with romantic relationships. Accepting penalties after Owen's put-downs for a point or two. Falling for evil aliens or doomed heroes for a whole lot more.