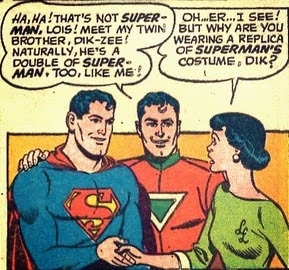 Ok, bear with me, it's gonna take a little set-up before we get to this week's Superman. See, it all starts in Part 1 of a two-part story, titled "The Lois Lane Doll" which is all about Lois getting duped by the "Doll King", an entrepreneur actually heading the Anti-Superman Gang, who was come up with a foolproof Silver Age plan to, uhm, make Superman sad. First he puts walking, talking Superman dolls on the market and makes a bucketload of money. Then he approaches Lois Lane about taking her likeness for a second doll, which again makes bucketloads of money, enough that Perry White envies Lois' royalty check. AND THEN, he proposes making the 10,000th doll sold a life-size model and give it to Superman as a promotion. 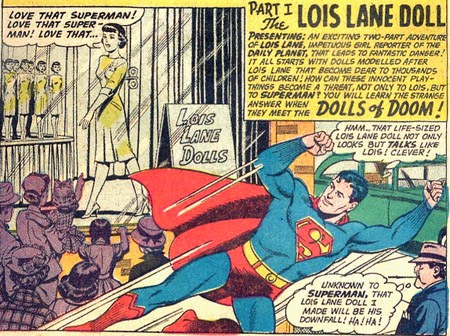 But of course, the doll will have a massive bomb inside it which the Doll King will detonate once he's pretty sure the doll is in the Fortress of Solitude so it destroys Superman's trophies and kills the alien animals in his zoo. If you can't kill the Man of Steel, you can at least pull a dick move on him. And it's no surprise the Silver Age Superman is quite happy to bring a life-like Lois Lane doll back to his place. Hm. Wouldn't you know it though, he's delayed going to the store promotion because of something from my darkest nightmares: 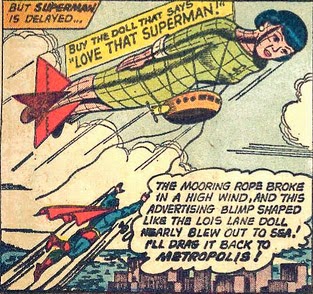 This makes the store owner want to vamp for time, but he can't send the big doll in his storefront window because the wind-up key broke off, so he sends the real Lois Lane out instead. She can walk mechanically and say the doll's programmed words, but she's no actress and refuses to do the toy's other tricks. So the store owner starts peeling onions to make her cry, throws pepper at her to make her sneeze and gives her a roofie so she can sleep. That's dedication to selling your product! 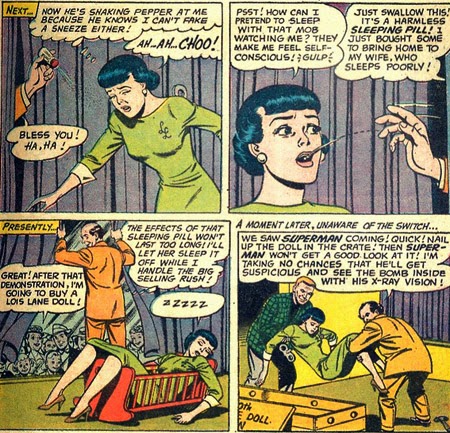 This is insane (though knowing businessmen, not entirely unbelievable), but is required for the next contrivance - the thugs, unaware of the substitution, put the real Lois in a crate and give it to Superman. Yay! Picture of Superman with a crate in tomorrow's paper! They really screwed the pooch on the photo op, and no one questions why Lois Lane is just standing there "loving that Superman", but shush. The important thing is that Superman indeed brings the crate to his Fortress before flying off to help an alien planet, leaving Lois to wake up alone. She explores the place a bit and is by the bottled city of Kandor when the Fortress' automated disinfectant sprinklers go off. The zoo animals are protected, but Lois risks choking to death, so she looks inside Kandor for someone or something to "exchange" with using Superman's Exchange Ray. Something that won't choke on the fumes. 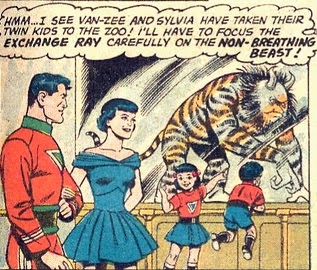 Superman once told her about this non-breathing beast because, well because you've believed everything in this story to date so what's one more unbelievable contrivance? But she screws up and exchanges with Sylvia, who is Lois' double in Kandor, just as Van-Zee is Superman's (you know him best as Nightwing, of Nightwing & Flamebird Kandorian fame).

Silly Lois, you forgot about your Kandor continuity. And that since everyone in the bottle is either a Kryptonian or chemically turned into a Kryptonian, ANYONE could have survived the Fortress' germ-scrubbing gas. Unfortunately, the exchange ray burns out and Sylvia has to wait for Superman to return from space before she can extract Lois from Kandor. Van-Zee takes her in and she meets Van-Zee heretofore unknown TWIN BROTHER, Dik-Zee, who dresses as Superman to entertain his brother's kids, huge fans of the Kal-El. Dressed as he is, and looking exactly like Superman, how could Lois not fall for this dreamboat? And the attraction is mutual. After all, as a twin, he could have the same tastes as Van-Zee, and Van-Zee married a double of Lois, so... His move is to invite Lois to work at his office, the Kandorian Press. 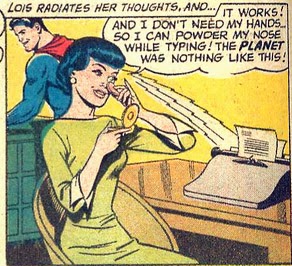 Silver Age Lois' dream come true: Working at a newspaper WITH SUPERMAN (ho ho! and is anyone going to say anything about Dik wearing that suit to work?) and typing articles with her hands free so she can constantly fiddle with her make-up. #Girls. Dik then takes her to the movies and on a moonlit stroll, even gets to do some heroic stuff in front of her... It's a magical series of dates. 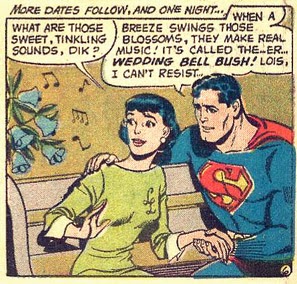 DILEMMA! But it's all taken out of her hands anyway as Superman returns to Earth, fixes his absurd gadget and she fades away. One minute she's seriously thinking of moving to Kandor, the next Dik-Zee is never to be heard from or mentioned again.

In postscript, Superman finds the doll, disarms the bomb, and by COMPLETE COINCIDENCE, Superman captures the culprits whose getaway plane is caught in a hurricane. If you want to attract Superman's attention, try to crash your plane, that usually works. As a final irony, the hurricane is called Lois, so she sort of stopped the bad guys, kind of. Hm.
Comics Reign Silver Age Superman

Doc Savage said…
Ah, back when comics were fun and Superman was a blast. Thank goodness for those Showcase Presents books! I've been able to enjoy literally hundreds of these great stories as a result of those inexpensive reprints. Never cared for Superman or his supporting cast until I read these old, fun, unself-conscious stories.

Why must Superman now be 25, scowling, and levitating with arms crossed angrily while his eyes burn red with the threat of heat vision? He worked so much better as a paternal figure.
January 4, 2014 at 10:40 AM