Reign of the Supermen #512: Not-Superman 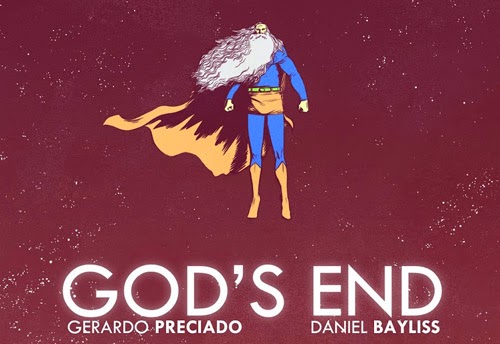 By the same guys who brought us Batman: The Deal, featuring a not-Batman and a not-Joker, God's End is a no-less cynical take on a classic superhero. You can read it via the link above, it won't take you long, but essentially, Superman's been away from Earth for centuries and as a species, we've disappointed him bitterly. And I'd love to hear your thoughts because I'm just not sure what to think myself.

See, I love indie-style art on superheroes, so visually, I do like it a lot. As a Superman story, which this is definitely supposed to be even though the S symbol has been filed off (I suppose that's where the hope has all gone), it doesn't really understand what Superman is meant to be about. But then, Preciado and Bayliss' Daredevil strip is an obvious spoof, so should The Deal and God's End also be understood as satire? Are they, in fact, satirizing the cynical nature of the New52? Though the Superman in God's End misses the mark in terms of what makes Superman an icon according to many (older?) fans, it might just work in the context of more recent Superman stories across all media (New52, Injustice, Man of Steel...).

Or the creators could just be fans of just such a take on the character, but we've seen a LOT of Superman gone bad stories using analogs, so it wouldn't make it particularly original. Of course, even as a Twilight Zone-ish short story, it's not perfect, unless anyone buys the line about there being no competition in nature. Uhm... But that's still how I choose to read it. As an indie satire using a premise that evokes the classic character but clearly isn't him

Regardless, I think what they're doing is interesting in that it takes characters that, without DC's legal shenanigans over the years, would be in the public domain by now, and shows us what that would mean. As public domain characters, anyone would be free to create stories about the characters, in whatever tone or continuity they wanted, without editorial constraints. But like I said, neither God's End nor The Deal are totally far off DC's editorial path for its Big Two, and I could easily have seen these stories given a spot in one of the digital anthology titles or, in The Deal's case, in Batman: Black and White.

But let me know what you think.
Comics Reign Superman

Craig Oxbrow said…
Well. Huh. If nothing else, it makes me appreciate the Doctor's reaction to the Toclafane more.
January 11, 2014 at 7:33 PM

Anonymous said…
That was... Ugh. The line about not knowing how to love unless you knew how not to love was terrible. "Superman" can be many things but he should never be a selfish, judgmental prick. The ending was dumb.

If Superman saw the world going to shit, he would try to fix it. I could see him installing himself as a benevolent dictator (and it all going wrong) before he would give up on the people of Earth and condemn them to death.

Invid said…
Okay, was I the only one who looked at this and immediately thought: