Reign of the Supermen #514: SuperKlown 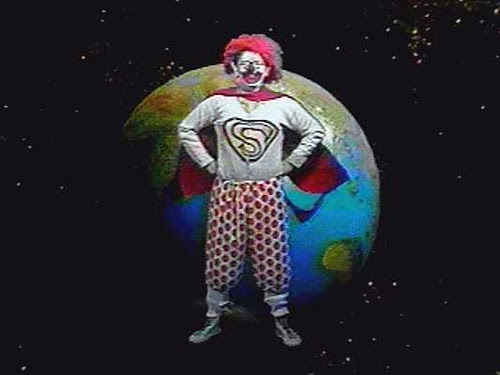 Orphaned son of planet Kronkton, Superclown's secret identity was a secret even to Gertrude...

This one was brought to my attention by fellow blogger Jon K (of Jon's Random Acts of Geekery), one of the identities assumed by children's TV star J.P. Patches, a spoof of the George Reeves Superman show. Here are TWO CLIPS from the show, and TWO MORE, which ran from 1958 to 1981, mostly on a daily basis, TWICE daily the first 13 years, live and improvised! I don't know how many appearances SuperKlown put in, but he seemed to be a recurring character. Patches was apparently one of the inspirations for Krusty the Clown, and a reference to him was included in a Simpsons episode. May I refer you to his Wikipedia entry for more condensed information (as opposed to the site the videos are on)?
Reign Superman TV

Anonymous said…
In a similar vein: